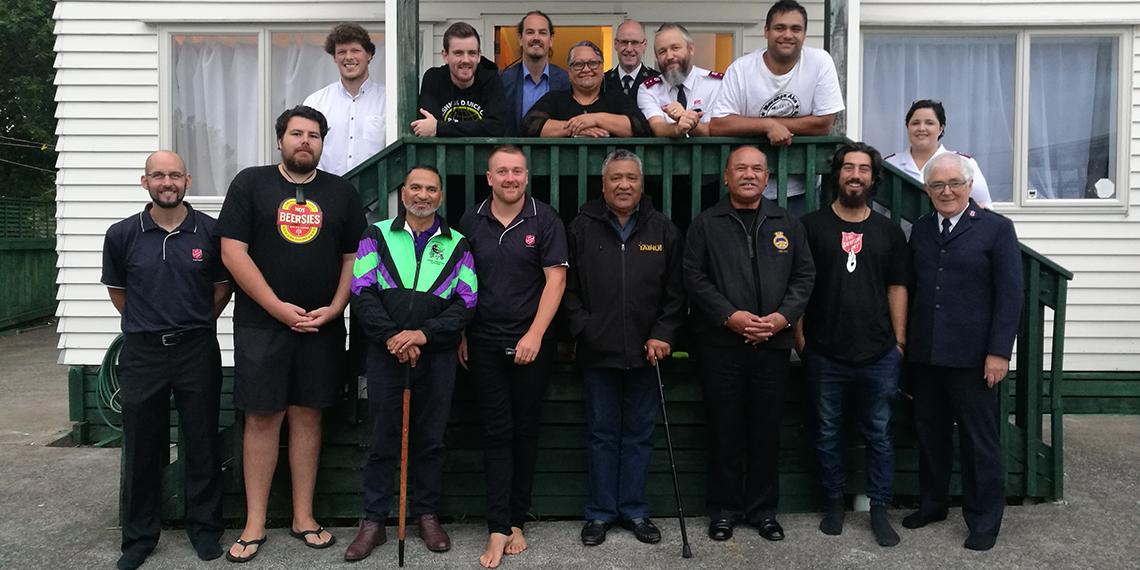 The Salvation Army is breaking new ground as it partners with Oranga Tamiriki to help young people transition from foster care to independent living.

Nestled at the foot of te maunga Puketāpapa are two fairly ordinary-looking houses. But there is nothing ordinary about what is happening inside. An extraordinary team of people are working together to support young people make the transition from foster care to independent living.

Launched on 19 February, part of the extraordinary team is professionally-trained and experienced youth worker James Adams, from Mt Albert Corps. Twenty-five year old James has a huge heart for young people, as evidenced in his eight years of youth work.

‘It’s not just a job, but a huge privilege,’ says James. ‘Youth work is a life choice. I choose to be part of the scaffolding that supports a young person’s development in the same way others helped scaffold my development. If I don’t get involved, if I don’t do this, who will?’

Youth suicide statistics in Aotearoa New Zealand are beyond alarming, says James. Not only are they the highest in the developed world, but they continue to trend upward. There are many factors behind these numbers, and while it’s not helpful to generalise, a lack of ‘resilience’ amongst young people is often cited as a key contributor.

When James left home at 20, his mum and dad were still in the background to call upon when things got tough. ‘When I compare my reality to that of other young people, who—for reasons not of their own making—don’t have whānau support to help them navigate this critical life stage, a lack of resilience makes sense,’ James states. ‘We all have gaps—I have gaps—but I had whānau and wider supportive networks that helped me build resilience, so I could bounce back when tough stuff happened.’

So the opportunity to journey alongside young men, supporting them to set goals, and take positive steps towards independent living and increased resilience is, for James, ‘a no-brainer’.

First of its kind

This new work in Roskill South is the first of its kind for The Salvation Army. Never before has government department Oranga Tamariki out-sourced a programme like this to another service provider.

Young people leave foster care when they turn 18, and many were not making the transition to adulthood as well as hoped, despite attempts by Oranga Tamariki to the contrary.
Meanwhile, Salvation Army statistics show a high percentage of those living at Epsom Lodge or accessing our addiction services have a background in foster care. So it makes sense for The Salvation Army to become one of several partners, eager to try and reverse the negative outcomes for young people leaving care.

The Salvation Army team are essentially setting up a normal flatting situation, but with increased support networks. Teina (young men) will flat with tuākana (older siblings), who have traversed a bit further along life’s path. James explains that it’s not the job of the tuākana to look after the teina, but to have a ‘guiding hand’ and ‘look out for’ them in their day-to-day life.
By going to work each day, taking turns cooking and cleaning, tuākana role model functional adult life as best they can, while still being fully human and susceptible to mistakes and challenges themselves—hence, resilience is modelled as well. It’s about ‘living together authentically’, James affirms.

The programme has the capacity for four young men, and two young women. Phase one is to get the male programme established, and then take the learning into the female programme in phase two later this year. The length of stay for a young person is fluid, and assessed on goal progress, but likely to be 1–2 years.

A three-person day staff team is comprised of men’s Youth Worker James, women’s Youth Worker Hayley Loloi and Team Leader Matt Evans. Matt oversees the referral process of the teina, wellbeing of the tuākana, and household relationships; James works with the four teina, and Hayley will work with the two wāhine once the female programme begins.

Speaking at the launch, House Manager and key project driver Michael Smith, who has dedicated 11 years of his life to youth work in the Mt Roskill area, said the project is ground-breaking for The Salvation Army. He explained that the successful tender for the contract was ‘totally a God thing’. During a team meeting in 2017, it came out that a significant number of the youth workers at the Roskill South Youth Development Team (Royal Oak Community Ministries) had personally provided accommodation and significant support to a young person at this crucial life stage.

They wondered if there was an intentional way to support these young people, and within weeks, the Oranga Tamariki contract came up for tender.

A number of individuals have worked together strategically over the past 12 months to see the project get off the ground, including tikanga adviser Captain Hana Seddon, Māori Ministry Co-ordinator Northern Division. Te maunga Puketāpapa is a significant site for tangata whenua, and so a partnership that takes steps to honour Te Tiriti o Waitangi is being intentionally developed.

On 19 February, just before dawn, the house was formally blessed by local kaumātua, matua Martin Cooper, matua Toi Katipa, whaea Mere Karena-Komene and mauta Hone Hope. A mihi whakatau—followed by a lavish outdoor breakfast—took place as daylight emerged. One of the primary goals of the project is to exemplify ongoing implementation of good kaupapa Māori for work of this kind within The Salvation Army.

The team is especially keen to find some kaumātua to mentor and engage with the young people in the way a grandparent might. ‘It’s just about showing an interest in the lives of these young people. The more support and genuine care the better,’ says Michael.

Another aim of the project is to leverage other Salvation Army services. Michael is hopeful that, over time, some young people may even come to call The Salvation Army ‘home’.

The Puketāpapa house is looking for …

• Volunteers to act as kaumātua/grandparents

• a youth worker or social worker (with at least five years’ experience) who might be interested in living on-site as house parents for the girls’ house.