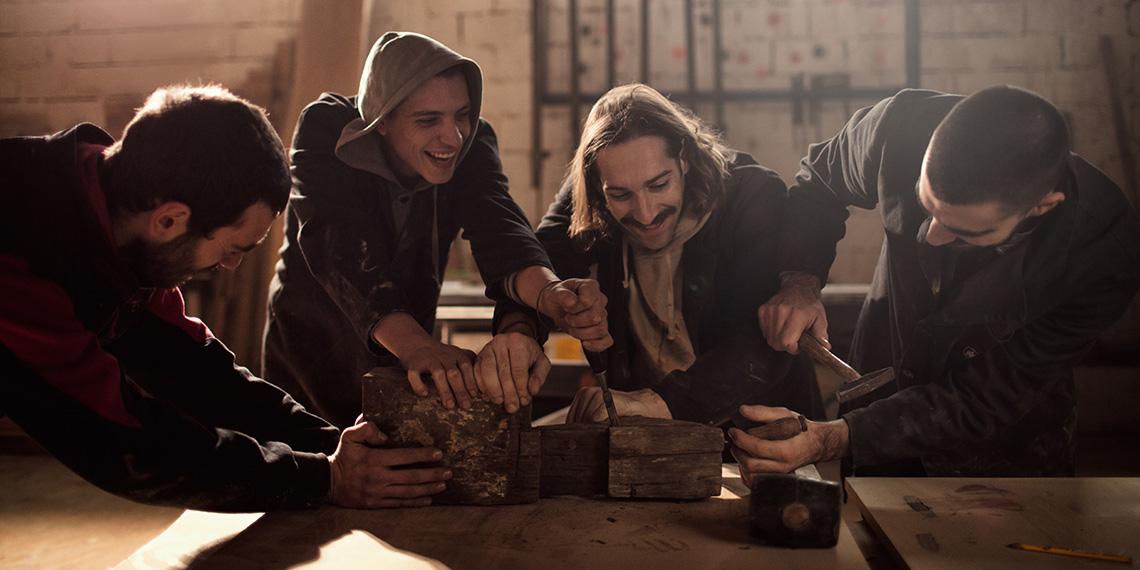 September 10 is World Suicide Prevention Day, and while men make up 70 percent of NZ’s annual suicide rates, Richard Black from Strength to Strength Ministries believes this can change, and that Christian men could lead the way.

While it’s true that more women attempt suicide, men are more successful. But according to Richard, ‘suicide among men is not so much a desire for death, but a means of escape from pain and pressure’.

While much has improved in Kiwi society, Richard is emphatic that the ‘boys don’t cry, and men don’t talk about their feelings’ mentality still dominates, and as a result, self-awareness among Kiwi men is low. But Richard is passionate about working with men to change that.

‘Many men lack a true understanding of what’s going on inside because they haven’t been taught to look inward. Even considering going to a counsellor produces worry that emotions will over-power him and he’ll lose control. He has no idea if he’ll survive venturing inward so he just doesn’t go there. This strengthens fear and threatens progress toward self-awareness and emotional intelligence.’

So, what can we do to help support our men? Richard believes that men themselves are a key part of the solution.

‘As men, we have the power to change this unhealthy culture by cultivating friendships and normalising talking about life’s challenges. The opposite of struggling—being supported—comes when you can share honestly with the right people.’

A husband and father himself, Richard doesn’t pull any punches when explaining what it can be like inside the mind of a Kiwi bloke. As a counsellor, he’s been party to this reality time and again.

‘Men carry huge expectations and pressures that they don’t communicate verbally. In the male mind, the perception is that certain things are simply “my responsibility”. Men inadvertently find themselves thinking, “I have to carry this because I’m a man and I can’t be a burden to my family”,’ says Richard.

‘But two things result from carrying such a heavy load: firstly, the internal pressure that has built up from staying quiet is compounded when wives or families assume their men are coping just fine; secondly, because women can misread this silence as strength, men can feel worse when their wives and families suggest he’s got it easy because he’s clearly handling everything just fine. Women tend to communicate their struggles verbally, and so a man’s silence can come across as uncaring, when really, he’s just trying to hold it all together.’

Richard knows that Christian men are not immune from this reality, but what they have to their advantage is faith. Research shows a strong correlation between spirituality and mental wellbeing. However, what can work against this positive factor is that Christian men can easily fall into the trap of extrinsic faith, which means that it becomes about external appearances and measures, rather than the inner strength that intrinsic (personal) faith yields.

‘This idea that there can’t be any cracks in my life creeps in. The lie that I can’t have faults, or be weak or struggling—and I certainly can’t be “ministered to”—produces shame and perpetuates silence among men.’

For Richard, some of the antidotes are obvious, but they fly in the face of many current church mindsets and practices.

‘The church is so busy growing numerically and trying new things, that we’ve forgotten the power slowing down has to enhance mental wellbeing. The secular world is recognising the need for slow and is repackaging traditional Christian spiritual disciplines that we’ve devalued like mindfulness and meditation. But, of course, the Bible talks about meditating on the word, being still, practising silence and solitude and contemplating nature.’

Richard wants to see churches incorporate mental wellbeing into spirituality and discipleship, because his observation is that churches tend to sideline it into one of two possibilities: ‘firstly, many churches separate it from spirituality entirely, having no theology of mental wellbeing at all; the second group view it as a separate compartment, but at least acknowledge that over there in the corner is mental health and we can talk about it if you become unwell. They consider everyone to be well, until someone’s clearly not. Then they send people down a special path until they are well again and able to “come back” into the “normal functioning church”.’

Richard insists that this approach is too binary (you’re either well or unwell) and especially unhelpful for Christian men.

‘Mental wellbeing is a continuum, and the ability for an individual to express where they’re positioned on that continuum in different areas of life is essential. You can’t tell me that there is nothing challenging you in some area of your life! If you can, that’s denial, because we’re all being made into the likeness of Jesus and until someone can say, “Look I’ve made it”, we all have a growth edge in our lives to pursue. If we can’t accept this, we’ll atrophy.’

Richard is passionate about changing the language we use when it comes to mental health and wellbeing, to make it more palatable for men.

‘The key for men is to grow stronger in emotional intelligence. If we can start to name emotions and feelings in a more empowering way, this takes away the “touchy feely” stigma. Men like to grow in strength—it’s tangible. So, growing in emotional intelligence looks like men noticing and becoming more comfortable naming what they’re feeling. Doing this can be incredibly useful (men like usefulness too) because it can inspire their growth edge and be life-changing.’

Richard has just published Centred, the first of five booklets on ‘mind-health’ that can be read in about 45 minutes. Centred answers questions about the building blocks of mental and emotional wellbeing, and the enhancement of resilience and personal self-regulation in preventing poor mental health. Published by Mainly Music, Centred is available for purchase through www.mainlymusic.org