Does religion cause war? | The Salvation Army
Skip to main content

Does religion cause war? 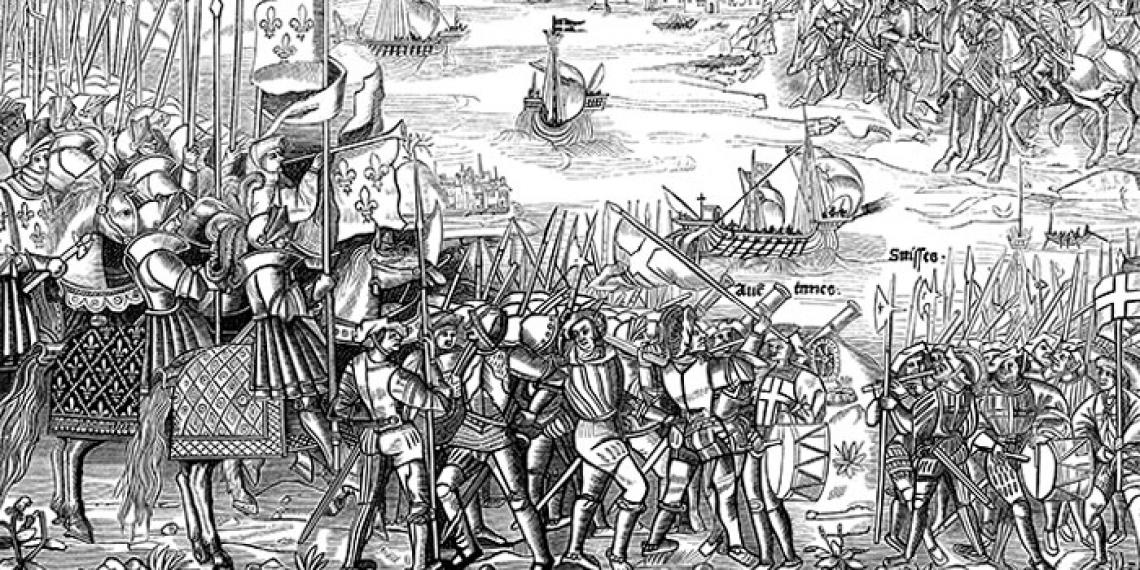 Ian Hutson explores the Christian response to ‘religious wars’ and to the violence we are witnessing around the world in the name of religion.

With what seems like disturbing regularity, the media reports horrendous acts of violence. Children gunned down, innocent civilians killed by bombs or bullets, and hostages executed publically when demands aren’t met. We hear reports from various commentators attributing this increase in violence around the world to religion. Religion is irrational, archaic and dangerous—or so they say.

Although in recent years there has been a lot of finger pointing at Islamic extremists, Christians can’t dodge the blame either. Examples include the crusades, sectarian Catholic and Protestant violence in Europe, and support for the Apartheid system in South Africa. We must admit that our own history is a mixed bag, and that violence has been perpetrated in the name of Christianity.

With the regularity that we hear the mantra ‘religion is the cause of all wars’, it would be easy to become disenchanted in our faith. If it’s said often enough it must be true—right?

But, like so much else about the issue of religion’s relationship with war and violence, such generalisations are incredibly simplistic and misleading. Not only do they misrepresent the powerful benefit for good that flows out of the gospel of Jesus Christ, but also much of the positive influence of the family of God throughout history.

At the same time, it could be equally easy to deny the culpability of ‘our’ religion, while accepting uncritically everything that is said about another religion. A better understanding of other people’s faiths, along with the context underlying their belief and behaviour, is part of ‘loving our neighbour’—or doing unto others what we sometimes wish our secular friends would do unto us, when they dismissively judge our Christianity.

Our view of Christianity and its relation to war and violence is a subject worthy of thought, as we seek to shape our faith in a way that reflects the love we have for God and as we seek to honour him.

The accusation that religion causes war is especially simplistic when applied to the pre-modern era. Religion, then, was not thought of as somehow separate from the rest of life and therefore could not be specifically identified as the cause of war. In reality, people groups, states and empires resorted to war for multiple reasons, including economic and social concerns.

Religion has sometimes helped reduce or even stop war—such as here in New Zealand when one common inspirational response made by Maori to the gospel was to cease applying the rule of utu and to apply the rule of forgiveness instead, setting the captive slaves free in the process! This kind of religiously-motivated outbreak of peace has often been overlooked.

So, too, has the fact that secular states have often been incredibly violent. Think of the French revolution (the birthplace of the secular state), Communist Russia, the regimes of the Shah of Iran and Ataturk in Turkey, not to mention Hitler’s Germany.

Religion has often acted as a corrective to state violence, with variations of the ‘do unto others what you would like others to do unto you’ golden rule, which is not only found in Christianity. Mahatma Ghandi, Martin Luther King, Archbishop Desmond Tutu—and here in New Zealand the Maori prophets Te Whiti o Rongomai and Tohu Kakahi at Parihaka—are  clear examples of religious leaders who did much to avert violence by refusing to use it, even for what they clearly saw as a just cause. This was only possible because of their religious convictions.

A religion can also be greatly affected by the context that it exists within, so that we sometimes see religions respond to and reflect the anguish and fears of the culture and people it exists within. An essentially peaceful religion can become more violent and aggressive in its thinking when it is imbedded in a people who live in a climate of fear, violence and humiliation. In that context it can be hard to determine whether the religion was intrinsically evil and violent, or was ‘turned’ that way by the extreme context it existed within.

In New Zealand, the peace that first came to Maori through Christianity initially resulted in increasingly peaceful relations between various Iwi. It was a peaceful religion. However, with the land wars, the loss of land, devastating epidemics and the loss of mana, Maori experienced huge disillusionment and despair. This left them open to religious leaders who espoused a more aggressive theology that sometimes emphasised violent Old Testament themes. A religion of violence.

It would seem that too often the love of God does not work sufficiently in our lives that it reaches to our neighbour and that we do not always meet the call of Jesus to ‘love our enemies’.

A striking example of this is the genocide in Rwanda. In his research on Christian churches and genocide in that country, Timothy Longman notes the extensive criticism faced by that country’s Christian churches, not only for failing to oppose the genocide, but for complicity in the violence. A World Council of Churches team that visited Rwanda in August 1994 reported: ‘In every conversation we had with the government and church people alike, the point was brought home to us that the church itself stands tainted, not by passive indifference, but by errors of commission as well.’

Longman’s research confirms these conclusions. He says church personnel and institutions ‘were actively involved in the programme of resistance to popular pressures for political reform that culminated in the 1994 genocide, and numerous priests, pastors, nuns, brothers, catechists, and Catholic and Protestant lay leaders supported, participated in, or helped to organize the killings.’ Given that both Catholic and Protestant churches in Rwanda were multi-ethnic, this means that ‘in most communities members of a church parish killed their fellow parishioners and even, in a number of cases, their own pastor or priest’.

When the roots of our faith do not reach down fully into the depths of God’s love, fear and terror can follow. And so we stand in a place in time where must we consider our response to the fears of
our world.

I participated recently in a time of prayer for peace. It was carried out in response to the recent killings in France. The prayers were held in a Mosque, and leaders of the three great monotheistic faiths were present: Christianity, Judaism and Islam. The Jewish Rabbi prayed that violence would not define us and our religion. All repudiated this kind of violence and referred to the teachings of love and acceptance inherent in their respective faiths. All were concerned that the fear and hate building in much of the world should not spill into New Zealand.

From a Christian point of view, I found this challenging. It could be tempting to score points on Islam in making the most of the obvious evil carried out in its name by some. This could seem a good way of lifting the Christian banner higher. Certainly, there are real issues around the potential risk to innocent people when terrorists carry out their immoral plans. Thought needs to be given on how to respond to this.

In addition, the media’s focus on the most sensational and negative aspects of any issue can raise emotions and lead to the demonising of a whole people. Germans living in New Zealand during World War I and II experienced this. Despite all kinds of efforts they couldn’t seem to do anything to get acceptance as New Zealanders, and experienced rejection and some violence instead.

Although no excuse can be made for the barbaric violence carried out by individuals in the name of Islam, it does arise out of a context with a long tail. British, Russian and American imperialism, oil and forced secularisation have all exacted a terrible price on the people of the Middle East. The religion of Islam was brutally repressed—in Iran by the Shah, Iraq by Saddam Hussein, Turkey by Ataturk, and Eqypt by Nasser. No wonder, then, that a violent and reactive kind of religion has appealed to some.

Many wars have led to large numbers of people leaving their countries yearning for a better life. Some have found what they were looking for, but others have found isolation and marginalisation in their adopted countries. The racism and ghettoization of Islamic people in France has been identified by many as a likely contextual factor that could lead disaffected young people toward the kind of violence that is now emerging there. Islamic religious leaders that appear to articulate the reasons for their plight, a way of striking back, a cause to die for, a reason to live, and a people to belong to can be persuasive to young people, who have a palpable sense of being discriminated against.

I am sure, however, that the winsome love of Jesus is always more powerful than violence in affecting peace, by reaching people with God’s love.

Jesus broke down so many walls. He spoke to and about Samaritans in a positive way, despite the prevailing view of disdain and even hatred for Samaritans at that time. He had as a disciple Simon the Zealot, who belonged to a group that worked to incite violence and rebellion against the Roman Empire (a terrorist). Jesus also chose Matthew, a tax collector—or if you like, a collaborator with the Empire. Wouldn’t it have been interesting to hear Simon and Matthew talk about their view of the Kingdom they were hoping Jesus would initiate?

What can we, as Christians, bring to the conflict that seems to be affecting many around the world? Will we greet the refugee fleeing from desperate situations of poverty and violence? Or will we seek to exclude the stranger because of a common generalised view our cultural group uncritically dresses up as fact?

We are called to follow Jesus, who has broken down every wall. Maybe the first step in removing a wall is to meet and get to know a person from a cultural group we might be apprehensive about, perhaps because of the prevailing views of our people group.

My prayer is that, far from contributing to the rather erroneous view that religion causes all wars, Christians would witness to the world that Christ our saviour has broken every wall. And that we, as his followers, are prepared by word and in deed to be a light to the world in a time of darkness.

Lieut-Colonel Ian Hutson is the Divisional Commander of the Central Division in New Zealand.

by Ian Hutson(c) 'War Cry' magazine, 12-13 March 2015, pp9.
You can read 'War Cry' at your nearest Salvation Army church or centre, or subscribe through Salvationist Resources.