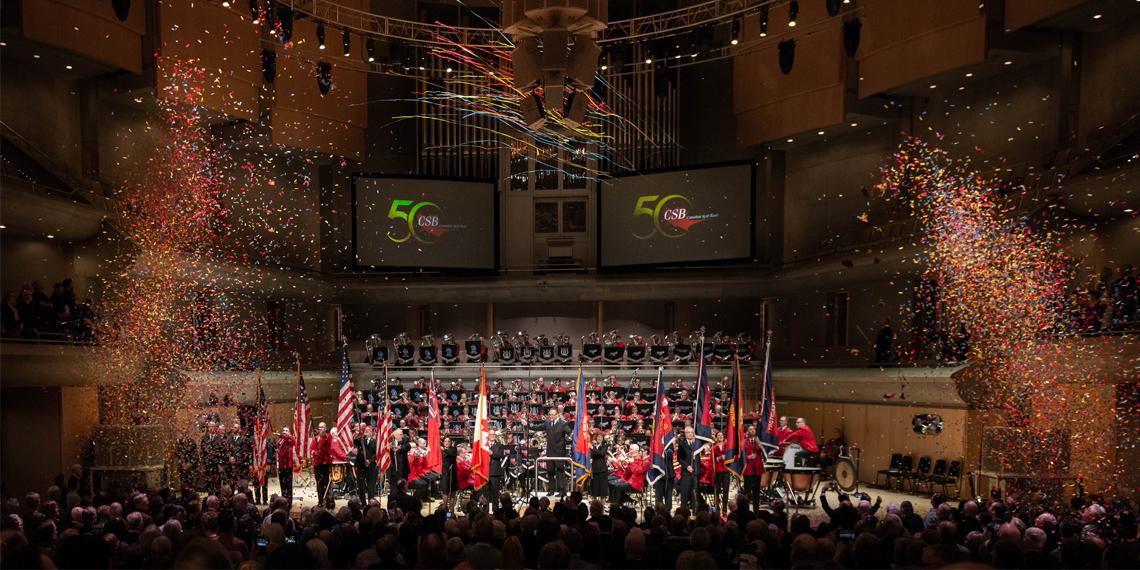 Fifty years of music ministry from The Salvation Army’s Canadian Staff Band (CSB) were marked with a series of concerts and worship services in Toronto this March, under the baton of Bandmaster John Lam. Four visiting bands from the USA – Chicago Staff Band, New York Staff Band, USA Southern Territorial Band and USA Western Territory Staff Band – made this one of the largest banding events in Salvation Army history.

General Brian Peddle and Commissioner Rosalie Peddle (World President of Women’s Ministries), together with five territorial commanders from Canada and Bermuda, and the United States, were on hand to provide leadership.

The bands kicked off the weekend on Friday 1 March with a series of concerts in Ontario. The following day, the bands converged on Roy Thomson Hall in Toronto for an all-day musical event that included afternoon performances by each band and an evening concert with the massed bands.

Evening selections included a performance of former CSB bandmaster Colonel Robert Redhead’s ‘O Church Arise’ and ‘Symphony of Thanksgiving’ by Commissioner Sir Dean Goffin, which was played at the inaugural CSB concert at Toronto Temple in 1969. Another newly-commissioned work from composer William Pitts, ‘Boundless’, featured the tunes ‘Joy in The Salvation Army’ and ‘O Boundless Salvation!’. CSB alumni then performed ‘Just Like John’ by Lieut-Colonel Norman Bearcroft, the first bandmaster of the CSB, who was present at the concert to the great delight of the audience.

Trumpet virtuoso and guest soloist Jens Lindemann made an impressive entry in the second half, using a plunger mute to humorous effect in Kevin Larsson’s rendition of ‘When the Saints’. He then picked up the flugel horn for Larsson’s more subdued ‘Going Home’, which commemorated former CSB members as their names scrolled on-screen.

In her message, Territorial Commander and CSB Executive Officer Commissioner Susan McMillan shared from Hebrews 12, noting the ‘great cloud of witnesses’ in the hall and encouraging them to continually ‘fix their eyes on Jesus’. She invited the band members and other musicians in the audience to stand symbolically around a bass drum – ‘the portable mercy seat and a place of prayer and covenant’ ­­– as the General shared in prayer.

‘On an anniversary like this,’ he noted, ‘it gives us pause to look back and declare God’s faithfulness to us. But we are also pushing forward to share his message so that the world may receive the love of God through music, witness and service.’

The evening concluded with a surprise appearance by William Himes, retired bandmaster of the Chicago Staff Band, who wrote a new piece for the 50th anniversary entitled ‘The Psalmist’, which featured five of Canadian composer Major Len Ballantine’s unique works. As an encore, the massed bands performed ‘The Canadian’, a march by James Merritt.

On Sunday morning, the five bands provided worship at five Toronto corps. Commissioner Rosalie Peddle shared her testimony at Mississauga Temple Community Church, remarking how she has been changed by her new role as an international leader and the vibrant Salvationists she has encountered around the world: ‘My calling, my commitment and my passion are stronger than ever before.’

The General referenced his Call to Mission: ‘Our purpose is to find God’s place for us in the world. We are to infiltrate and transform the secular spaces. I want a people of prayer, a people that are prepared and a people that are battle-ready. Salvationists provide a visible expression of a holy life.’ In response, many knelt at the mercy seat to rededicate their lives.

During Sunday afternoon, the bands met for a final reception that included CSB alumni and a performance by the Canadian Staff Songsters.

Though the CSB’s roots go back to the 1880s, the original band was lost in the tragic sinking of the Empress of Ireland while travelling to the UK for an international congress in 1914. The band reformed in 1969.