Chief of the Staff leads 125th anniversary weekend in Scotland 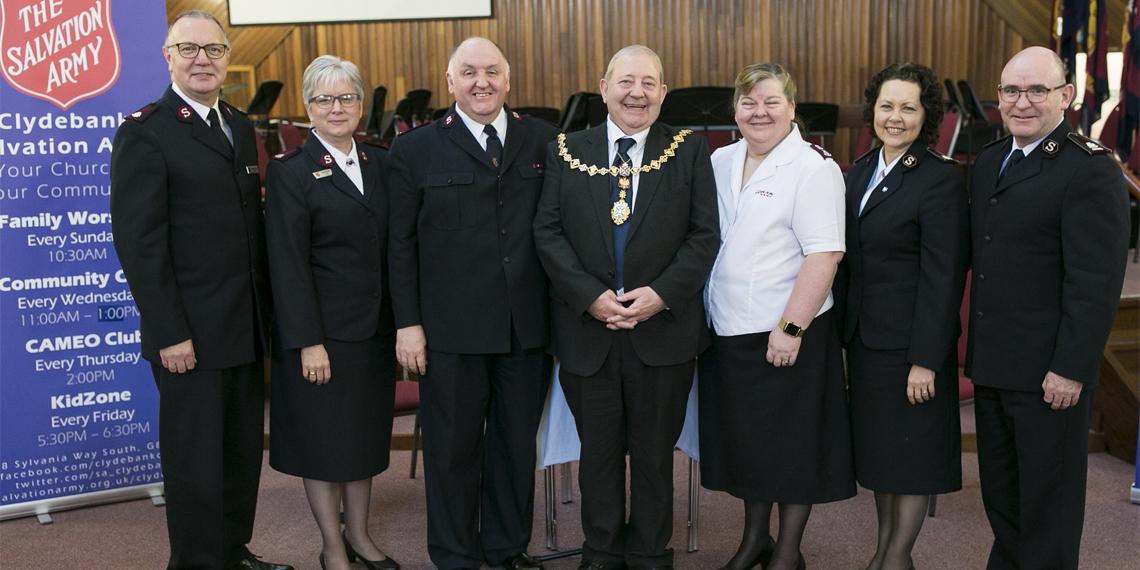 Scotland hosted Chief of the Staff Commissioner Lyndon Buckingham and Commissioner Bronwyn Buckingham (World Secretary for Women’s Ministries) as they helped members of The Salvation Army’s Clydebank Corps (church) mark 125 years of Christian ministry. The Salvation Army’s presence in the west Scotland town was pioneered by Mr and Mrs Jolly, a Salvationist couple from nearby Whiteinch. They began evangelising in the town in the summer of 1893 before helping establish a permanent church a few months later.

Anniversary events began with an informal reception in the company of Provost William Hendrie, civic leader of the local council. The commissioners were greeted by the Provost who thanked The Salvation Army for the important work being carried out by its officers, volunteers and staff. He told them: ‘The Salvation Army carries out vital work in over 130 countries internationally. This work is made up of countless local branches like the Clydebank Corps, which has constantly offered care and support to many who have sought help. For that reason, it is an integral part of the local community here.’

The Chief of the Staff thanked the Provost and gave some insights into the Army’s global mission. Following the reception, there was an evening meal for Salvationists and friends of The Salvation Army.

Sunday began with a morning meeting centred around a renewal of mission priorities – an opportunity for the local church community to sign up to be involved in the activity of the corps. Many people responded to express their commitment. Clydebank corps officer Major Dean Logan commented that The Salvation Army is ‘excited about the potential for how this will manifest itself in the continuing transformation and development of our worship and outreach in Clydebank’.

To conclude the 125th anniversary, there was an afternoon of celebration praise involving the children and young people’s vision for the corps. Young People’s Sergeant-Major Philip Henderson, with the help of other young people, led an active prayer time where the congregation was given the opportunity to pray about their hopes and dreams.

The Chief of the Staff said: ‘I congratulate everyone involved in the Salvation Army in Clydebank. What this expression of Christian ministry has achieved in this town is a beautiful thing.

‘Commissioner Bronwyn and I are praying that the Lord has used this weekend for his honour and will recognise what we need as a church. As Clydebank Salvation Army celebrates and thinks about its future, you cannot do that without thinking about the provision of God and what his desire might be for our work in this town.’

Major Logan concluded: ‘We finished our weekend celebration with the sung declaration “I Dare To Be Different”, and we now move into our 126th year with a refreshed zeal, a new enthusiasm, and excitement and anticipation for the future of our church! God is doing a new thing here. God is not done with Clydebank Salvation Army.’