Healthy future for The Salvation Army in Africa 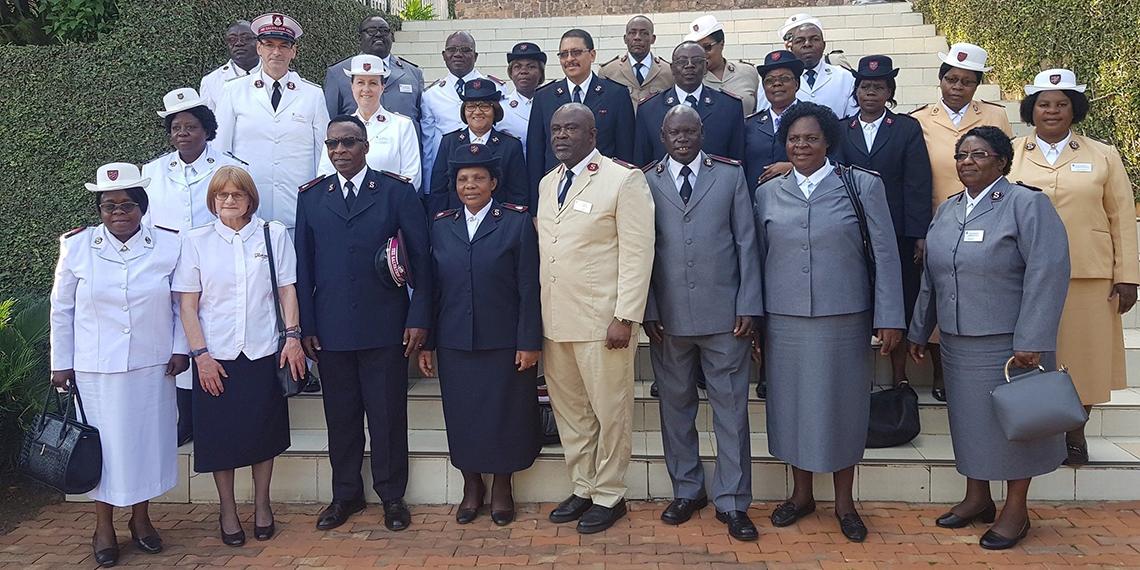 Salvation Army leaders from across Africa met in Kigali, Rwanda, from 23 February to 1 March 2019. The 34 delegates to the Conference of Africa Leaders (COAL) represented the 26 African countries in which The Salvation Army is officially at work. During the week, a wide range of topics was covered under the theme Leading The Salvation Army in Africa into a Healthy Future.

Delegates were uplifted by the prayer support of thousands of Salvationists around the world, which had been encouraged in a pre-event video message from Commissioner Benjamin Mnyampi (International Secretary for Africa) that was shared on social media. In the message he said: ‘The countries we represent are diverse. God is at work here – hallelujah! There is much to celebrate, but also many different needs. Africa needs our Salvation Army. Africa needs Jesus.’

Across 14 sessions, delegates examined the dynamics of discipleship, mission, leadership, projects, finance and self-sustainability/income-generation initiatives. Practical sessions on prudent project and financial management led delegates to consider how The Salvation Army in Africa can move towards becoming fiscally self-sufficient. Much thought was given to developing leadership skills for Salvation Army personnel across the continent, and identifying the leaders of tomorrow.

Each day began and concluded with an hour of praise, worship, Bible study and prayer, which – along with evening devotions led by conference chaplain Lieut-Colonel Evan Mhasvi (Zimbabwe and Botswana Territory) – provided opportunity for deep communion with God.

Honours and congratulations were extended to five leaders – Commissioners Benjamin and Grace Mnyampi, Commissioners Henry and Catherine Nyagah, and Commissioner Vinece Chigariro – who are set to retire later in 2019. The Salvation Army in Africa is indebted to them for their exceptional service to the Kingdom of God and the legacy and impact they have made for the Army.

During the week, the appointment of two Africa-based child protection specialists was announced. These positions will increase capacity and further support The Salvation Army across Africa in this critical ministry.

Agreement existed among leaders that many of the discussion items were of relevance to all territories. While territorial, command or regional dynamics would prevail, commonalities around appropriate responses were evident. One matter viewed as vital and deserving of immediate attention was leader development. This coincides with General Brian Peddle’s call to ensure that development of leaders at all levels receives international focus and attention.

The matter of retaining and encouraging children and young people within The Salvation Army evoked urgency. The theological and doctrinal understanding of Salvationists met with similar concern, along with an expressed need to ensure that opportunities for nurturing healthy discipleship are within easy reach for all. And while women's ministries programmes are strong across the continent, ministry to men and by men was discussed in depth, with agreement that they are vital to a healthy, growing Army.

Promising indicators of solid financial health, along with evidence of intentional self-sustainability, were reported within some territories. Synergy quickly developed as leaders declared: ‘We can also do that!’

The critical question moving forward was simply: ‘How?’ Reflecting on Zechariah 4:6-9, the response was explored by Commissioner Grace Mnyampi (Zonal Secretary for Women's Ministries) in a fitting conclusion to the week’s deliberations. ‘A healthy future for The Salvation Army in Africa depends on what chance we give the Holy Spirit,’ she stated. ‘He is not a liability that needs limiting but the only one who can truly make an eternal impact ... We should not limit the Holy Spirit.’

In addition to the formal COAL activities, delegates participated in the welcome to nine cadets of the Messengers of Grace Session, which took place at Batsinda Corps. A capacity congregation witnessed Commissioner Benjamin Mnyampi challenge all Salvationists to commit to spreading the gospel message and to remain faithful. This was also a fitting reminder to COAL delegates of their primary mandate

During their time in Rwanda, delegates and zonal staff also visited the Kigali Genocide Memorial, where Commissioners Benjamin and Grace Mnyampi laid a wreath at the mass grave holding the remains of 250,000 victims and offered prayer for families of those who died. The event was broadcast on national television and included an interview with the international secretary.