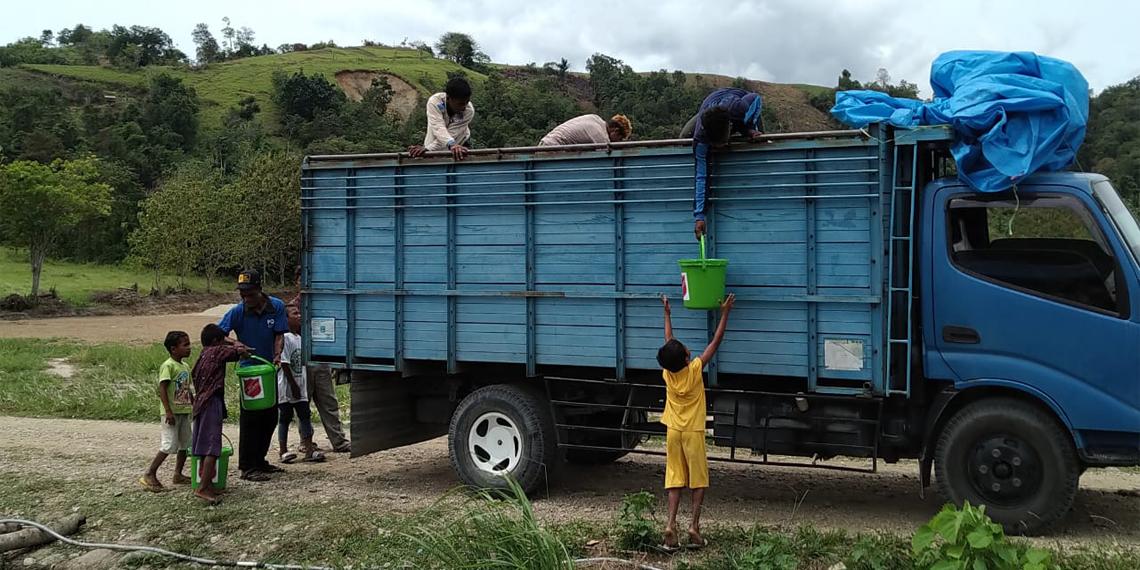 Four months after the 7.5-magnitude earthquake and subsequent tsunami which caused massive damage to Central Sulawesi in Indonesia, The Salvation Army’s Indonesia Territory and its International Emergency Services team continue their humanitarian support to many communities and villages.

Recently, the team commenced the distribution of WASH (Water, Sanitation and Hygiene) items which included washing detergent, a bucket with a lid, jerrycans, a mosquito net, water scoops, soap, towels, material for menstrual health and personal items for all ages in a family (men and women, girls and boys). The first distribution took place at Jono Oge village in Sigi Biromaru district, where 892 families received WASH kits.

The local authorities – including police and the military – oversaw the distribution, and the kits were received with appreciation. The earthquake destroyed many homes in this area, which also suffered from land liquefaction (saturated soil), resulting in large amounts of land becoming unusable. Distributions also took place at Padena, where a village had to be relocated due to the earthquake and mudslides, and in Rogo. Additional communities will also receive WASH kits, with a total of 4,500 families being assisted.

Road access to a number of areas is still erratic, as was experienced by International Emergency Services team members who travelled to the southern and eastern areas of the island. Long waits were required for roads to open, due to work being undertaken to stabilise old roads or, in some cases, create new roads to replace those that were destroyed by landslides.

The Salvation Army is providing continued support for rural medical clinics and trauma counselling, which is appreciated by the 26 villages served and more than 3,000 patients treated. The Salvation Army’s Woodward Hospital in Palu continues to serve the local residents and those coming from rural areas.

Many schools – including a number under The Salvation Army’s leadership – now operate out of tents, while plans are finalised to finance the rebuilding of classrooms. The government has provided guidelines so this is done a safe distance from known fault lines. One teacher, working in a tent that served three different classes, told the visiting emergency team of the challenges they face but that they still get great joy from teaching.

Continued support is required to assist with the relief and rebuilding effort which The Salvation Army is dedicated to undertaking.