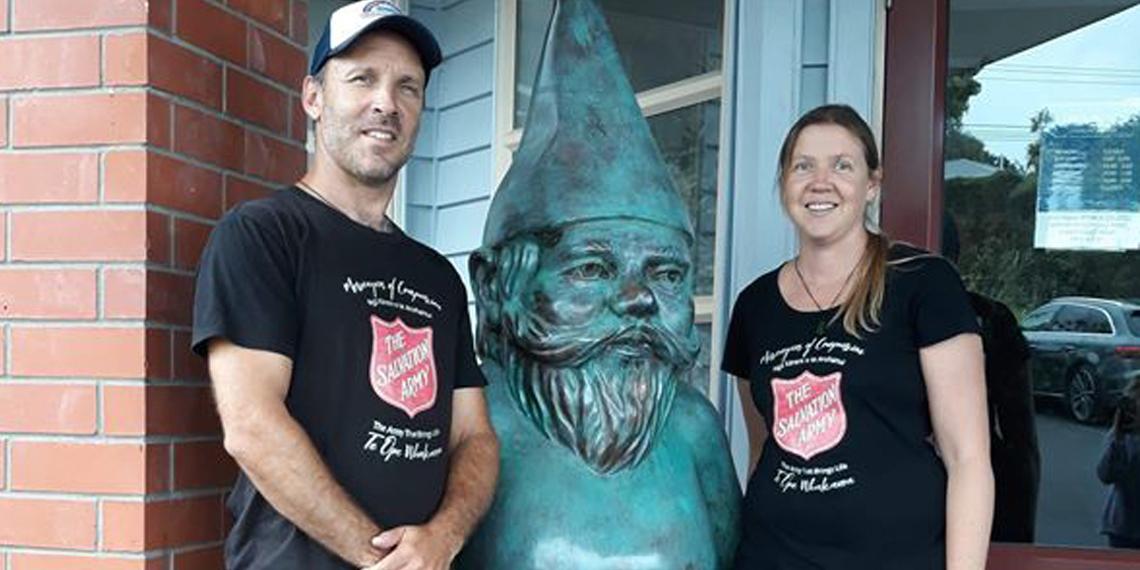 The Salvation Army hit national headlines yesterday when a giant stolen gnome was left on the steps of Glen Eden Corps. But only War Cry got the exclusive, behind-the-scenes interview!

The arrival of a $55,000 statue has brought our Glen Eden Corps into national news headlines.

On Tuesday morning a 150kg bronze garden gnome was found sitting outside the west Auckland corps by financial administrator Neil Arnold on what was supposed to be an ordinary day back in the office.

The statue had originally made headlines after it was stolen from outside the Gow Langsford Gallery in central Auckland on Christmas Eve.

‘He didn’t think much more of it.’

It wasn’t until Ivo’s wife Heather showed up for the day that it quickly became apparent the corps had not spent $55,000 on a giant garden gnome.

‘Heather turned up and thought ‘that’s weird, wonder why the corps has purchased a new gnome to stand at the front door’. But then she clicked pretty quickly,’ Ivo laughed.

The statue had shown up sometime in the night with a note ordering it to be returned to its home at the Gow Langsford Gallery.

The police were subsequently called and took fingerprints for any evidence left by the perpetrators.

‘It was so well placed, it wasn’t just a random drop in the middle of the car park. It was right by the front door in line with the curbing,’ Ivo said.

‘We joked about being able to provide a night of emergency accommodation for the gnome.’

‘The people at the gallery were happy to get it back reasonably unscathed, just a couple of marks where some paint had been rubbed off.’

The gallery have said they will be giving the Glen Eden Corps a donation for its hospitality.

‘I did make a few suggestions that it would look nice in our yard but at $55,000 that idea doesn't really fly.’

Ivo said someone had suggested the thieves clearly thought the Salvation Army was a trustworthy place to leave a piece of costly art.

‘It was a privilege to have a gnome of such noble stature visit us overnight. We are happy that he made it home safely though. He is welcome to visit Glen Eden Salvation Army anytime. Blessings.’ Ivo wrote on the Gow Langsford Facebook page.