One in five can’t afford to celebrate Christmas, survey finds 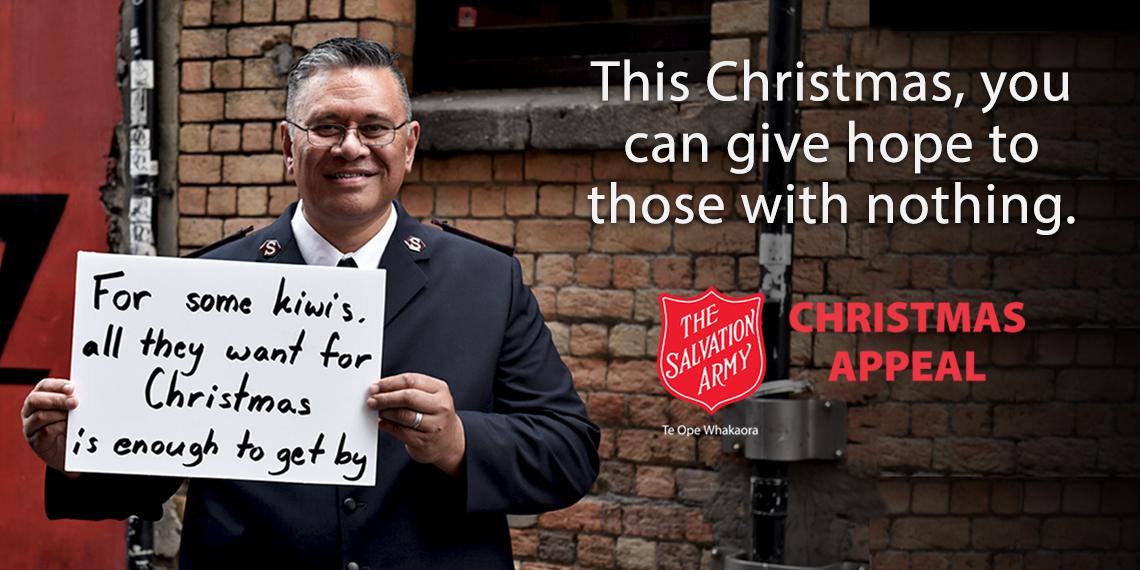 A recent survey1 commissioned by The Salvation Army shows that a large proportion of Kiwis can’t afford to celebrate Christmas.

“When we see results like this from a survey of the general public, we fear for our most vulnerable people. Not those who have overspent on parties or presents, but the ones who will come to us for food and shelter over the Christmas period,” says The Salvation Army head of welfare services Major Pam Waugh.

The online survey conducted by a third party received 1,000 responses from people aged over 18 years across the country. It comes as The Salvation Army prepares for its annual Christmas Appeal launching today (19 November), with its theme of ‘All I want for Christmas’ highlighting how this holiday season is a time of stress and struggle for many while others celebrate.

The Salvation Army acknowledges that the recently instated Families Package, designed to provide targeted social assistance to improve incomes for low and middle income families with children, is a step in the right direction, but warns positive effects will take some time to be fully actualised.

“People who come to us for help are in a cycle of debt which takes time to break. This is a slow process and in the meantime we still have families struggling at a time that should be joyous,” says Major Waugh.

In 2017, 17,000 New Zealanders sought help with the basics of life from The Salvation Army cases in the lead up to Christmas.

“Some of these cases were individuals, but many were families. Nearly 28,000 children were among the families we helped last year,” says Major Waugh.

“We expect this year to be just as bad and we can’t keep up with demand without support from the public.”

Although many survey respondents said the best gift they can receive is travel, money or toys, around one in ten would just like to get a job (8 per cent) or basic needs; food, shelter and utilities (5 per cent). Unsurprisingly, those in lower income households were significantly more likely to wish for a job or basic needs.

“Ten per cent of people in the survey said they go without so their kids can celebrate Christmas. This is a time we should all be able to enjoy, yet we see people struggling to keep the lights on and put food on the table,” says Major Waugh.

“We’re asking the people with enough to give to the less fortunate so we can all enjoy this time of year,” says Major Waugh.

“Our services are designed to give people the tools and support for positive change for the future. Often people come to us for emergency help at Christmas time and we continue to work with them to get them firmly back on track,” says Major Waugh.

“I’m concerned that demand will outweigh what we can provide. With a huge proportion of families struggling at this time of year, more than ever we need support from those better off.”

The Salvation Army Christmas Appeal launches on 19 November throughout New Zealand. Donations can be made online at salvationarmy.org.nz/christmasappeal.

Issued on the Authority of Commissioner Andrew Westrupp (Territorial Commander)