The social cup | The Salvation Army
Skip to main content 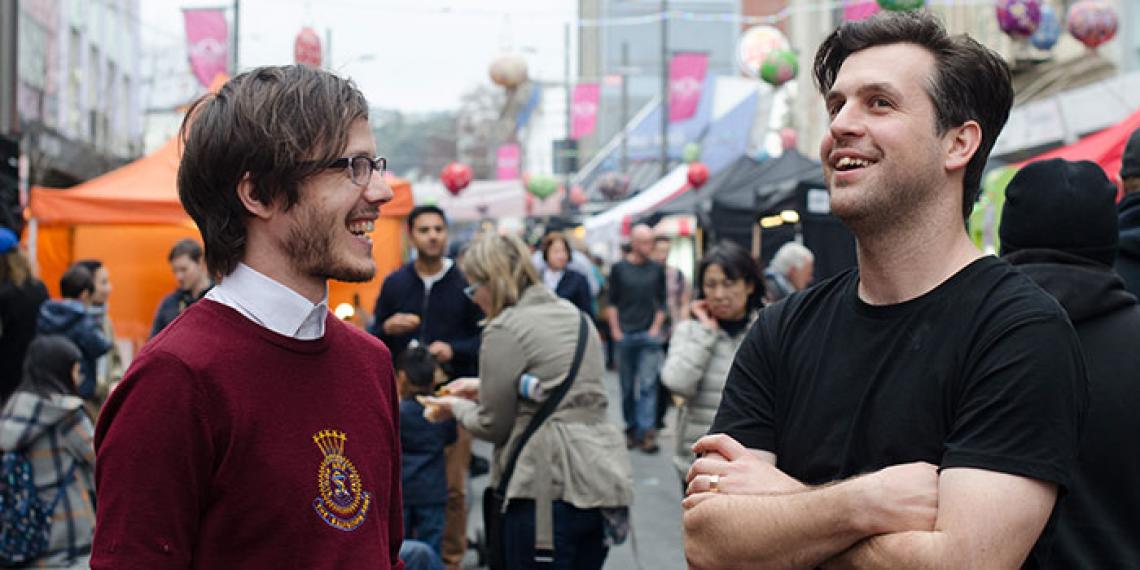 The fascinating story of what may well have been the world’s first fair trade beverage, Hamodava tea and coffee, started by Herbert Booth in 1897. And how a unique Salvation Army partnership in New Zealand is bringing it back to life.

Hamodava coffee has re-launched after 70 years off our shelves. In a truly creative partnership, Th e Salvation Army has joined with Jacob Parsons—the man behind Mt Atkinson Coffee—to bring us premium, organic, Fairtrade coffee. A portion of the profi ts from Hamodava will go directly back into The Salvation Army’s frontline social work, right here in the New Zealand, Fiji and Tonga Territory.

As a Wellingtonian, being a coffee snob is in my blood, so my first surprise is just how good this coffee is—a strong and heady cup of black gold. But the real gold is the story behind Hamodava.

When Salvation Army officer Lieutenant Jordan Westrupp first came across the story of Hamodava, he was dumbfounded. ‘It deserves to be told, along with the famous stories we tell,’ says Jordan. ‘And it happened right here!’

In 1897, Herbert Booth was commandant of the New Zealand and Australian Territory. He had the brilliant idea of capitalising on tea drinking culture. ‘We’re talking about the Victorian era when tea drinking culture was in its zenith,’ explains Jordan. ‘There was a whole process of sitting down and sharing tea together.

Herbert Booth recognised there was money to be made, and a way for officers to be engaged in pop culture.’ Herbert set up a warehouse in Australia and imported the highest quality tea from Ceylon (now Sri Lanka). He called the venture ‘Hamodava’ after the Sinhalese word for ‘Army’. It proved a huge success. Profits went directly back into Salvation Army work, locally and overseas. Within its first nine months, the Army made enough money to fund its work in Indonesia for a whole year. By 1900, coffee and hot chocolate were added to the Hamodava range.

But what is perhaps most remarkable is that The Salvation Army became arguably the first producers of fair trade beverages. ‘One of the really compelling things about the historical story is that because of The Salvation Army’s ethical culture, and wanting to restore the world, they unintentionally stumbled into a very early model of fair trade,’ explains Jordan.

In Indonesia, the Army developed a business model that allowed farmers to buy back their own farms. To put this in context, slavery was still legal in more than 20 countries, and had only been abolished in the USA 15 years earlier. Hamodava was an example of some phenomenal counter-cultural thinking, and an immensely creative way to bring salvation-thinking to an everyday commodity.

‘This is in the midst of Victorian culture where Mother England used colonies for their resources,’ adds Jordan. ‘It would be outside of normal thinking—you don’t give your farmers independence, because you want to extract as much as you can out of them.’

The Salvation Army served its beverages at weddings and had partnerships with organisations like the YMCA. They adopted the catchphrase ‘the social cup’, because they saw Hamodava as another way to be ‘present where community and life was happening’.

But times changed. Industrialisation meant mass-produced goods overtook the market, and World War One took its toll. The tea-drinking culture gave way to gumboot tea-on-the-go. So, in 1920, Hamodava stopped operation. The pioneering tea company was all but forgotten.

After Jordan stumbled upon this inspiring story almost a century later, it kept playing in the back of his mind. And he started having big thoughts.

It was a chance meeting—or divine intervention—that gave wings to Jordan’s idea. He asked coffee company Mt Atkinson to bring its coffee van to an event he was organising. Little did he know that its owner, Jacob, already had his own story of using a coffee business in subversive ways for God’s Kingdom.

‘I’ve always wanted to run a business,’ explains Jacob. ‘I love how business interacts with charity. Because you can’t have a profitable business if you have a bad product. You give people something they really want, and they’ll keep coming back for it, and you can use that to make an impact.’

Jacob began his business 10 years ago, when he bought a half-finished coffee van to honour friend Andrew Atkinson who tragically drowned in 2007 after back-flipping off a bridge while at the Parachute music festival. Andrew had been a great entrepeneur and was in the process of fitting out the coffee van when he died. Jacob bought the van from Andrew’s parents, and named his business Mt Atkinson Coffee.

‘I didn’t know how to make coffee, but I had developed a business model,’ says Jacob. ‘I asked coffee roasters if I could learn from them. I would get up at 5 am and park-up wherever I could get a spot on the side of the road.’ He still has his van —now on Atkinson Road—but also roasts his own coffee. His flagship café, The Tannery, is in Auckland’s New Lynn.

Jacob and his wife Emily use profits from their businesses to support Watoto Child Care Ministries in Northern Uganda, which cares for orphans and ex-child soldiers. In this part of Uganda, water is turned off for three months of the year, profoundly affecting the hygiene of the Watoto communities. Emily and Jacob have funded the building of 16 concrete water tanks, with a 400,000 litre capacity—meaning villagers now have water all year around.

‘That’s what we got into business for—we’re passionate about running businesses for the purpose of transforming lives and making the world a better place,’ reflects Jacob.

So when Jordan told Jacob the story of Hamodava, it got Jacob thinking. He began having his own big thoughts.

What followed was a lot of ‘brainstorming and dreaming’. ‘We asked, What would partnership look like? How do we honour the story, so we’re not just plundering the brand?’ explains Jordan. ‘Hamodava was doing something back then that we can honour today: the ethical trading, addressing the farmer’s needs, and addressing issues in the community where the coffee is consumed.’

They were walking into unchartered territory for the modern-day Salvation Army. ‘I like to joke that we don’t have a Secretary for Caffeinated Beverages, so no one knew where to put the idea,’ laughs Jordan.

But, with goodwill from both the Army and Mt Atkinson coffee, several key people worked to turn the big idea into a new reality—they developed a solid business plan, and worked though complex legal issues. A unique partnership was born.

Jacob describes it in layman’s terms: ‘The Salvation Army is cutting edge in frontline social work, so you stick to what you’re good at. I’ve been making, roasting, distributing and marketing coffee for 10 years, so I’m sticking to what I’m good at.’ A portion of the sale of all Hamodava products will go directly to Salvation Army frontline social work. A governance board will ensure profits are directed back to where it’s most needed.

Sitting down over a coffee is the perfect metaphor for their partnership: ‘We’re sticking to what we’re good at—but it’s an open conversation,’ says Jacob.

At the recent Now is the Time congress in Wellington, Hamodava coff e was available to purchase for the first time, and was literally going out the door by the bag full. Granulated instant coffee and hot chocolate are also available.

There has already been interest from large organisations and even supermarkets—but Jacob knows that it’s important to start well, and stage the business’s growth. Currently, they’re product testing and promoting the product within the Army. ‘But I anticipate Hamodava will take over Mt Atkinson coffee in terms of output,’ he says. ‘The real income generation will be outside the Army.’

Jordan is excited to bring back to life the orginal ‘social cup’ that gives the Army a presence in culture’s social spaces. ‘As an officer who believes in the God-breathed mission of The Salvation Army, I really like the idea of using Hamodava as a vehicle for telling our stories. If we want to tap into what makes Salvationism unique, it’s about cultural subversion. We’re people who plunder from the world, flip it, and give it back to the world in a way that makes the world better. Every good story that we would claim for God has cultural subversion in it.’

He adds what should probably become the mantra for every Salvation Army project: ‘We actually used to be crazy, and sometimes we just need to be reminded of that. We do this kind of crazy stuff .’