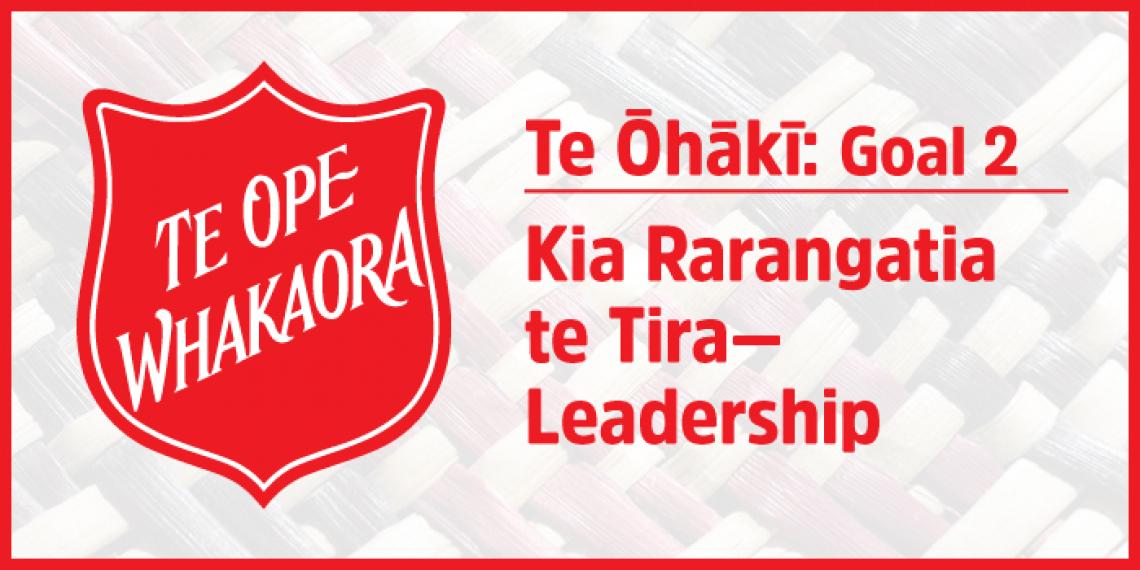 Te Ōhākī, our Māori Ministry Strategic Plan, has been in place for two years. It has started an important conversation in The Salvation Army that has had both expected and unexpected consequences. The expected consequences include a demonstrable increase in training around the motu (country) at all levels—from corps to the governance table, greater use of the language of biculturalism in our activities, and attempts at all levels to build enduring relationships with tangata whenua.

The most important unexpected consequence is that our Māori Salvation Army members have felt empowered to ask about their own tino rangatiratanga (self-determination) within the Army and the challenge of balancing our Salvation Army’s hierarchy with Māori community leadership structures.

We celebrate the progress being made, but it is clear we still need to work together to realise a pathway for tino rangatiratanga within The Salvation Army and, in particular, to continue our conversations about leadership.

To achieve the optimum results from Te Ōhākī it is important all aspects of The Salvation Army in Aotearoa New Zealand become aware of, and involved in, the outworking of this strategy—from territorial headquarters, divisional headquarters and nationally-managed programmes to the corps and centres within the communities where we serve.

The Salvation Army’s work with Māori (known in New Zealand as tangata whenua, ‘the people of the land’) needs to be understood in the context of both the place of spirituality in the life and culture of tangata whenua then and now, and the centrality of New Zealand’s founding document, the Treaty of Waitangi.
Mana Māori

Historically, there was no sense in which spirituality was a separate or optional part of life for Māori communities—and in many senses this persists for contemporary marae communities. This means Māori communities are open to religion and spirituality and have a language to engage in those debates and discussions. However, this also means that Māori communities tend to integrate new expressions into their existing community life, rather than transform their community in line with new spiritualities and religions.

The whāriki is an important symbol of community in te Ao Māori. In our Māori Ministry strategic vision, the whāriki symbolises the weaving together of tikanga and Christianity.

Our conviction is this weaving together will allow Māori within The Salvation Army and those we are in relationship with to flourish into their full potential. The master strand that holds our whāriki together is Christ, and our relationship with him gives us full freedom to express our identity, our relationships and discipleship as tangata whenua.

Christ’s final wishes
An ōhākī  refers to someone’s last words before death. Christ’s final words in the Great Commission were that all believers would go forth and make disciples of all nations, baptising them in the name of the Father and of the Son and of the Holy Spirit.

It is a sadness that around the world—including in Aotearoa New Zealand—these words have been used as a tool of colonisation, rather than as an imperative to build relationships that transcend culture, ethnicity, race and all other barriers.

Te Ōhākī is a call to The Salvation Army to put whakawhanaungatanga (creating connectedness and relationship) at the heart of our faith and our life together. In this way we will truly honour both the founding treaty of our nation and the final words of our Lord and Saviour, Jesus Christ.