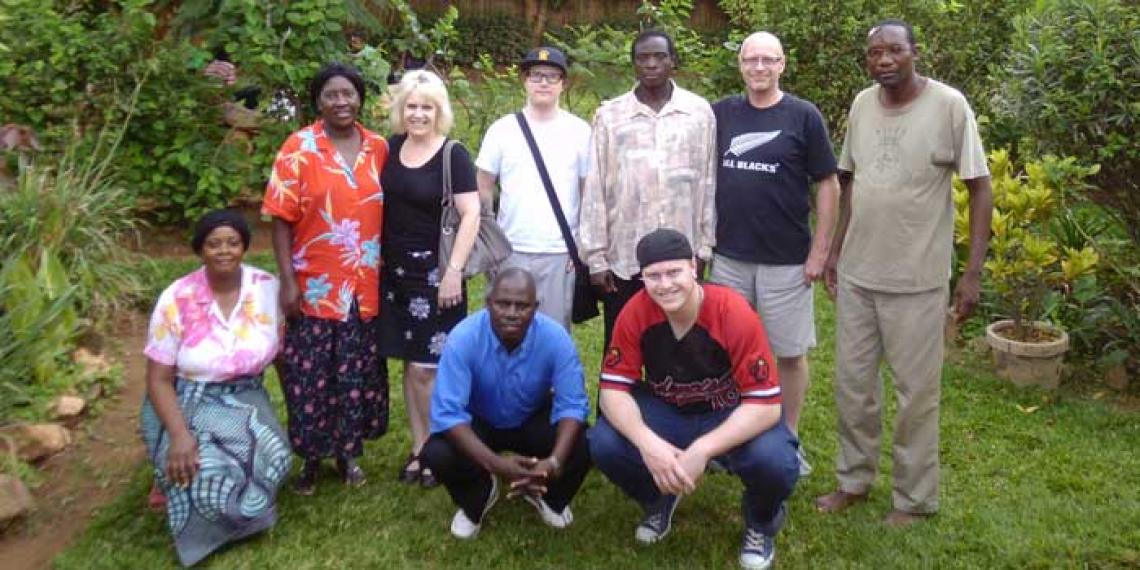 I was born into a loving Christian home in New Zealand, and at the age of seven I gave my life to the Lord. It was at an Easter Camp when I was 14 that God called me to Salvation Army officership, (full-time service as a Salvation Army minister). I recall not being particularly impressed by this at the time!

After going out with Robert for a while, we realised our relationship was getting serious and both of us felt we needed to be honest with each other about God’s call on our lives, particularly the whole ‘officership’ thing. Thankfully, we were both on the same page—we wanted to be obedient to God’s call, we trusted that God wanted the best for us, and we believed he could use us in his service.

And so, after 18 months of marriage and with an eight-month-old son, Nik, we entered The Salvation Army Officer Training College in Wellington. Robert had for some time felt a real call to serve overseas, and so we also made that offer to The Salvation Army.

Quite soon, The Salvation Army asked us if we would serve in Zambia at ‘Chikankata’, a Salvation Army mission hospital and secondary school. Robert’s background was in teaching and so he seemed to have the necessary qualifications for this work. We answered a nervous yes. I was especially nervous—while Robert had a strong call to serve overseas, I didn’t feel any such call. However, I felt that if Robert was going, well, I had better go with him!

And so, in February 1992, we found ourselves and three young sons (aged one, five and seven) a long way from home and all that was familiar. As a city girl in Zambia I found myself asking, ‘Where are the shops?’ Along with, ‘Where is the power and the water?!’

What incredible experiences we had during our six-year stint in Zambia; a time that was, in all honesty, an incredible mix of highs and lows. One strong memory I have is of watching a plane way overhead in the sky and thinking, ‘Yes, there is still a world out there.’ At times I felt so isolated. I had so many lessons to learn about who I was, about my faith, and about who God wanted me to be.

In Zambia we served at the Chikankata Secondary School and also in Lusaka, where we were appointed to the Officer Training College. I will never forget our nine months of ‘no water’ and how I selfishly pleaded with God that I just couldn’t tolerate this—I just wanted to go home! I realise that Salvationists back home in New Zealand are preparing for the annual Self Denial Appeal at the moment. Well, it was Self Denial money that helped us bore for water in Zambia all those years ago!

Today, Robert and I find ourselves back on the African continent and serving in the Southern Africa Territory. It is a wonderful unexpected blessing to be back on this red soil!

My current appointment is Territorial Secretary for Women’s Ministries. My role is to ‘empower women’, which both challenges and inspires me. This great land is full of tremendous women. Its past attests to the strength and courage of its women. There is a saying here that says, ‘You strike the women, you strike the rock.’ The rock of South African womanhood has been struck terribly and repeatedly over the past 50 years. Today, and partly because of strong continued support from Salvationists overseas, the women of South Africa can especially serve as a foundation for positive change across all areas of life, and across all ages and all racial lines.

Women in South Africa are the bedrock of this society. And yet, while they are respected and can attain certain influential positions, many face the daily struggle of poverty, sickness, HIV/AIDS, physical abuse, and the threat (for young women) of being trafficked. For instance, we are currently working to place a 10-year-old girl back where she belongs—with her family—after she was forcibly removed from her home by her own brother.

South Africa is a country of diversity, where the developed and developing worlds cross over and intermingle in a unique and complex way. Travel the streets and the homeless and disadvantaged are clearly seen, as are long queues at the country’s hospitals.

Good medical care is only for the wealthy in this country. A female officer here with a serious heart condition is often turned away when she seeks medical assistance. Sometimes it is because there is no doctor to see her, or because some necessary machine is broken, or simply because she doesn’t have the money to pay for the medical attention she needs. Honestly, I have never fought so hard nor been as frustrated as I am here in trying to source basic medical care for my sisters and brothers in Christ!

Perhaps the biggest heartbreak for me is the plight of the babies and children. The Salvation Army has four children’s homes here in Johannesburg. It is not unusual for vulnerable babies to be found dumped in rubbish bins, wrapped only in paper, or simply abandoned at the police stations.

From newborns and up, these children are cared for lovingly by those working in our Salvation Army children’s homes. Their carers work hard to raise awareness of their situation and needs, and to find the money to feed, clothe and educate these precious children that simply need love and a roof over their heads.

One incident that stays with me is from last December, just two days before Christmas, when a four-week-old baby was found abandoned on the side of the road. It was raining and the bundle was wet. On unwrapping the huge blanket, the most beautiful baby boy was found inside.

This baby was delivered into The Salvation Army’s care. We named him Christopher, our ‘Christmas baby’. How could somebody abandon such a beautiful baby? It’s hard for me to answer this, but I know that his mother cared enough to leave him wrapped in a blanket. Our hope and dream for Christopher is that he will grow up knowing he is loved by others and that Jesus loves him, too.

Visit the many rural Salvation Army corps (churches) here and it is impossible not to marvel at what is being achieved with very little in the way of resources. Many corps have no leaders and yet work diligently to proclaim the Gospel of Jesus Christ and make a difference in their communities.

From a strategic mission point of view, our work here in Johannesburg among youth and children is highly significant and very encouraging. The great majority of the city’s population, in contrast to other parts of the world—including New Zealand—is under 30. For this reason, the Southern Africa Territory is investing a large amount of international Self Denial money into the development of our youth and children’s leaders. Once trained, these leaders are, in turn, investing in programmes that are so essential here, including day care centres and programmes for young people that meet the specific needs of today.

There is a cost to the strategic direction of investing in the younger generation. Setting aside so much money exclusively for our youth and children’s work in Johannesburg, means there isn’t enough money for other important projects. This includes clean water projects, holiday programmes for children left at home while parents work, continued and necessary education around HIV/AIDS awareness, and the improvement of residences for Salvation Army officers around this territory.

It grieves me to see the state of some of our officers’ homes, with exposed electrical wiring, outside ablutions and kitchens that are uninhabitable. This disturbs me greatly. One unmarried woman officer I visited had a bandage around her ankle. When I asked her what had happened, she showed me her bath. The plastic coating around the plug had uplifted and every time she bathed, it was almost impossible not to catch her feet and ankles on the uplifted and dangerous plastic.

Just recently Robert and I, with two of our sons and one girlfriend, travelled back to Zambia to revisit our past. What a delight to meet up with colleagues and old friends! To listen, talk and share about our personal faith journeys and learn where and how God had led all of us was so inspiring. And we were reminded afresh what a difference the generous Self Denial giving of the international Salvation Army has made and continues to make to the country.

We met up with former pupils that in the 1990s had benefited from Self Denial donations. These men and women are now Salvation Army and community leaders. Cadets we had trained at the Officer Training College were now serving at Chikankata Mission, with others now on staff at the Training College in Lusaka. Still others now hold significant appointments at Territorial Headquarters.

One couple is appointed to a Salvation Army studio at Chikankata. This studio assists young people in learning about broadcast technology and improving their musical gifts and abilities. It also strives to get the Christian message out by radio to the surrounding community. During our visit, 30 talented young people ministered to us through music. What a sight and sound! Many of the instruments they used were lovingly handmade. Their passion and fervour in proclaiming the Gospel completely overwhelmed us.

We saw where money sent from The Salvation Army New Zealand, Fiji and Tonga Territory while we were serving in Zambia has been useful. Books we had purchased remain in use at the Officer Training College library, money set aside for the upkeep of buildings was still being put to work, and we saw evidence of the further development of programmes and people who, in turn, were now ministering to the lives of others. All this from the generosity of people back home all those years ago!

To me, ‘self denial’ will always mean ‘selfless giving’, for that is what it is. When you give, it affects you in some way; you pay a price. When we give to God, we pay that price—and we count it a privilege.

Robert and I are just ordinary people given an extraordinary task, people privileged to have opportunity for service outside the country of our birth. We, like many others, can’t do this on our own, we need you. As a past Territorial Candidates Secretary back home, I continue to appreciate these words from the officership recruitment campaign: ‘One life, make it count!’

John 12:26 reminds us, ‘If anyone serves me, let him follow me; and where I am, there my servant will be also. If anyone serves me, him my father will honour’. It takes radical commitment and significant sacrifices to really follow Jesus. And it’s worth it!