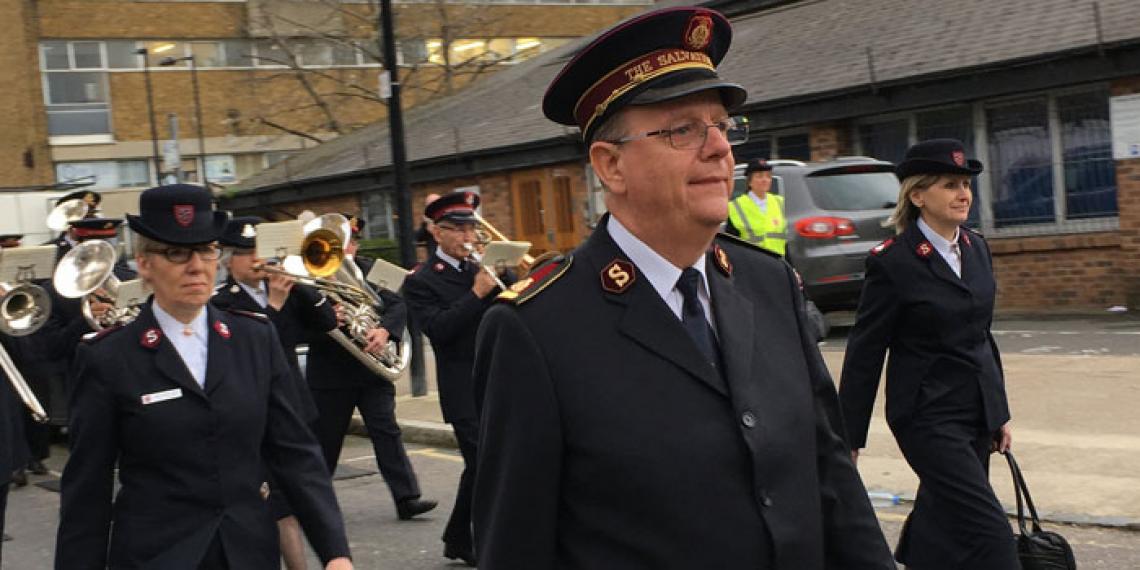 Standing in the shadows of skyscrapers in the heart of London’s East End, Poplar is the oldest surviving Salvation Army corps (church) in the world. Originally, Poplar was known as ‘Number 3’ but Whitechapel and Bethnal Green Corps are no longer in existence. In the 1860s and 1870s the corps (or 'mission post' as it began) was often frequented by The Salvation Army's Founder, William Booth, and his family so it was appropriate that the 150th corps anniversary weekend was led by the Army's current international leaders, General André Cox and Commissioner Silvia Cox (World President of Women's Ministries).

Celebrations began with a family fun day which saw members of the community engaging in craft activities, games and table tennis. The Timbreltastic group from Hadleigh Temple gave out tambourines, and many adults and children enjoyed a timbrel lesson before playing together to music.

The General and Commissioner Cox led a march from the hall to the local Queen Victoria Seaman’s Rest, where an exhibition of early Poplar Corps memorabilia was on display, including one of the earliest Salvation Army flags, still bloodstained from wounds inflicted by the 'Skeleton Army' – a group that opposed the early Salvation Army, often with violence.

The evening ‘From Music Hall to Lighthouse’ programme at the nearby Calvary Charismatic Baptist Church reflected the spirit of the early Army but within the context of the corps dynamic of today. As corps officers Majors David and Meshiel Brown welcomed the congregation they were interrupted by an apparently worse-for-wear ‘Champagne Charlie’ (Jo Cass) whose rendition of the 19th-century music hall song morphed into ‘Bless His Name, He Sets me Free’ led by vocal soloist Luke Cozens.

The General told the congregation: ‘This is where it all began. William Booth would be proud and pleased to see that The Salvation Army in Poplar is still fulfilling the mission of God; being present in the community, preaching the gospel message and meeting human need without discrimination. We cannot disconnect the gospel message from meeting those in need.’ He admitted that being in such a historic location almost gave him goose bumps but warned: 'We need to promote Christ and not The Salvation Army.’

John Biggs, Executive Mayor of Tower Hamlets, spoke of the continuing ‘boundless energy that exists in the East End to get things done' and recognised the great value of The Salvation Army in east London through the years. The Rev Cameron Kirkwood brought greetings from local churches.

Music was provided by a composite band and W1 Gospel Choir, who sang a lively version of ‘He’s Got the Whole World in His Hands’. Timbreltastic once again engaged the crowd with a lively interpretation of ‘Send the Fire’.

On-screen video greetings and testimonies from around the world clearly marked the international influence of Poplar Corps.

Corps youth worker Roz Lynch recited her poem ‘All You Need is Love’ before the band took on the Beatles melody as the congregation sang while waving mobile phone lights/torches!

Beginning her Bible thoughts, Commissioner Cox told the congregation: ‘There’s so much energy - something in the air ... it must be the joy of the Lord!’ She gave the reminder, while his people should thank God for the past, they must also listen to what he is saying to them today.

The evening ended with a visual roll call of more than 200 corps officers who have served at Poplar through the years.

The Sunday morning meeting began with lively worship before Gloria Okafor testified to the closeness of God’s presence during a time of family tragedy and trauma in Nigeria.

The General spoke of the rich and varied heritage of Poplar Corps. Giving the challenge ‘Will Poplar Corps be here in 150 years?’ he pointed out that early Salvationists were unafraid. He told the congregation that every Christian has a responsibility to step out and be counter-cultural so the light of Christ will shine through his people. Poplar Corps, he said, may have been around for 150 years, longer than any other corps in the world, but it only has a future if it faithfully fulfils God’s plan.

The meeting closed with the Poplar Corps theme song, ‘Build your Kingdom here’, after which Major David Brown invited the congregation to stand around the General and Commissioner Cox and, through a number of spoken prayers, commit the international leaders' worldwide ministry to God’s care and protection.

A video interview with the General can be viewed as part of the online version of this release: www.salvationarmy.org/ihq/news/inr210317