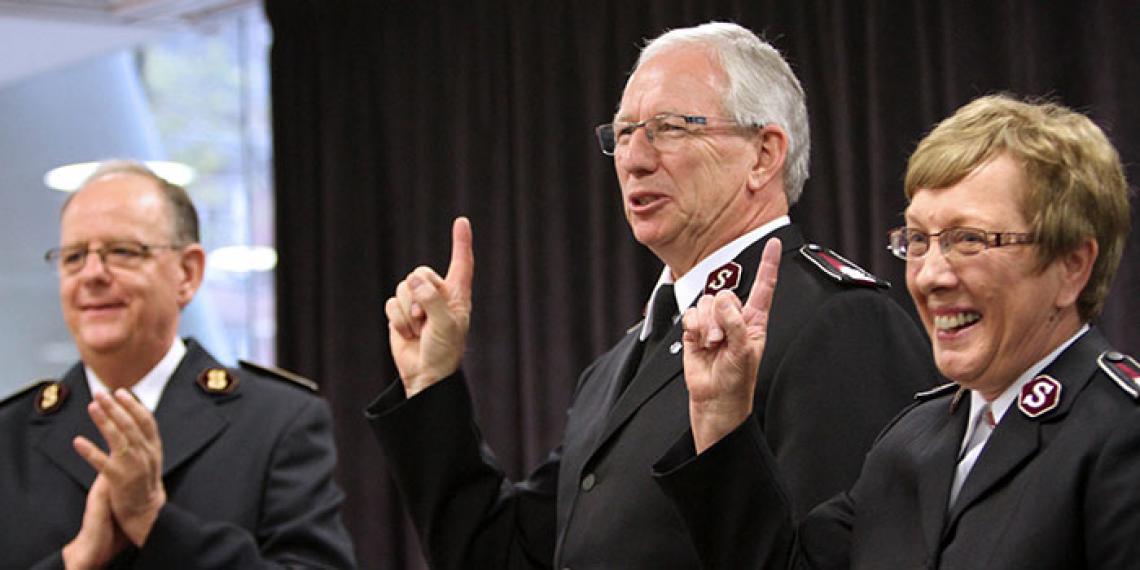 Grace, trust, love and commitment were the themes that flowed through the welcome to the new Chief of the Staff, Commissioner Brian Peddle, and World Secretary for Women's Ministries, Commissioner Rosalie Peddle at International Headquarters (IHQ) in London.

Distinguished guests – including former international leaders Commissioner Gisèle Gowans, General John Larsson (Rtd) and Commissioner Freda Larsson, and General Shaw Clifton (Rtd) – joined IHQ officers and staff for the celebration. None received greater recognition than the Peddles' daughters, Stephanie and Krista, who had flown across the Atlantic to surprise their mother. They were thanked by General André Cox – and others – for sharing their parents with the wider Army.

In his opening comments, the General greeted Commissioner Brian as his second-in-command. He spoke appreciatively about the Chief and Commissioner Rosalie's experience, vision, dedication and commitment, promising them that 'God who calls you is more than able to sustain you'.

Originally from Canada, the Peddles have served in their home territory, New Zealand, Fiji and Tonga Territory, the United Kingdom Territory with the Republic of Ireland and – for the past year – as zonal leaders for the Americas and Caribbean at IHQ.

A Scripture presentation, 'Extravagant Love', by staff and officers representing IHQ's five administrative zones, included excerpts from Bible readings about love and a cry of 'Praise the Lord! Hallelujah!' in each reader's native tongue. This was followed by a prayer from Commissioner William Cochrane (International Secretary to the Chief of the Staff) in which he called on the Lord to provide 'grace and deep, deep peace' to the new leaders and to everyone gathered.

Commissioner Silvia Cox (World President of Women's Ministries) gave a joyful welcome to the new World Secretary. She spoke about working with Commissioner Rosalie on the women's gathering at the International Congress in July. The event was a success, said Commissioner Silvia, 'because it was about glorifying God'. She recognised the attributes that Commissioner Rosalie will bring to her new role, particularly having 'a passion for developing and valuing women ... empowering them to be what God wants them to be'.

In her response, Commissioner Rosalie gave thanks for the messages of support and prayer she and the Chief had received from around the world. 'If all the people who have offered to prayer for us do pray for us,' she said, 'we have nothing to fear!'

She promised that she would seek to 'encourage, empower and inspire women all around the world', concluding with words of trust in God from the Stanley Ditmer song 'I'm in His Hands'. The song's chorus featured again moments later, sung by Jooles Tostevin, Kevin Sims and Berni Georges from IHQ Communications during a time of quiet contemplation.

Commissioner Gillian Downer (International Secretary for South Pacific and East Asia) offered words of welcome to The Salvation Army's 26th Chief of the Staff. She described the Chief as a 'gracious man – a spiritual leader with a heart of compassion' and reminded him that the Army is 'still called to save the lost, disciple our people and serve suffering humanity around the world'.

In a prayer of dedication the General asked the Lord to give the Peddles 'a sense of peace and your presence'.

Recognising the changes he is currently facing, the Chief of the Staff spoke about taking a step of faith, as shown in the Bible story of Abraham's willingness to follow God. 'Stepping out in faith is part of the journey of Christian life,' he told the congregation, illustrating his point with a recollection of bungee jumping in New Zealand!

He revealed that becoming Chief of the Staff had not been on his 'bucket list' but that when the General had asked him to take the appointment, 'faith and obedience collided'. Listing some of the many ways in which God continues to bless and use The Salvation Army, the Chief concluded: 'I would be crazy not to want to be a part of that!'

After the Peddles' daughters presented the song 'He Giveth More Grace' the congregation – accompanied by the IHQ staff band – joined in what the Chief described as a song of testimony for everyone present: 'In Christ Alone'. The meeting concluded with a benediction by Commissioner Lalzamlova (International Secretary for South Asia).