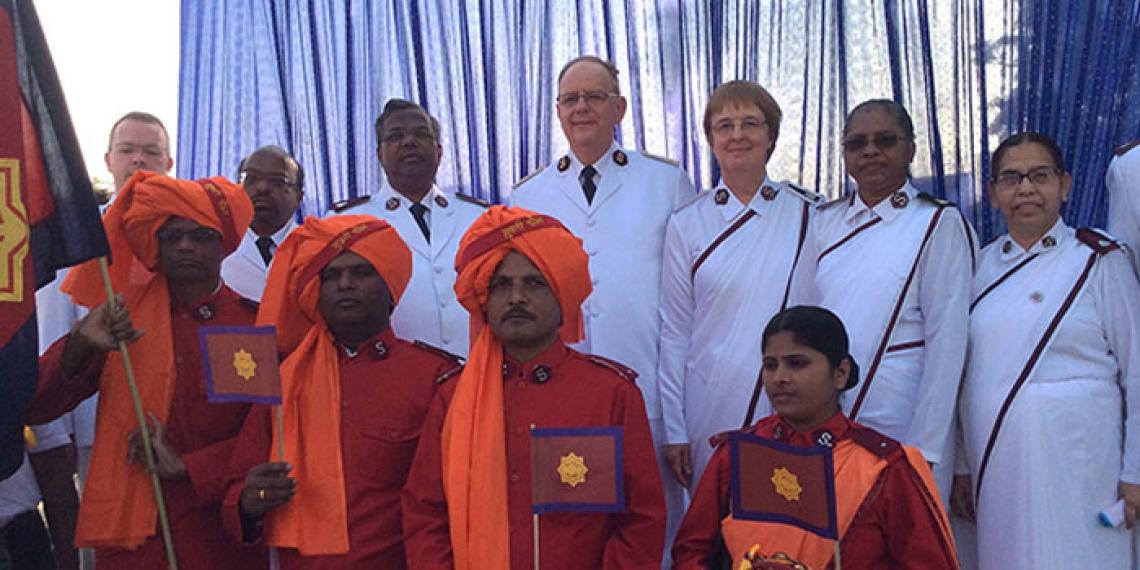 The General and Commissioner Silvia Cox Focus on Transformation Across the India Western Territory.

The visit of General André Cox and Commissioner Silvia Cox (World President of Women's Ministries) to the India Western Territory was a time of joy, excitement, challenge and encouragement for Salvationists and friends. Time was spent in both of the distinct halves of the territory – Maharashtra and Gujarat – each of which has its own language and traditions.

A Friday meeting in an open-sided tent in Ahmednagar, Maharashtra, was attended by more than 4,000 people. The Sunday holiness meeting in Anand, Gujurat, drew an even larger crowd, with more than 6,000 people gathering to worship and praise God. The General told the congregation that they must tell the world how they have been transformed by God. Recognising that Christians make up a small minority in many communities, he encouraged his listeners to tell what Jesus has done for them, saying that this testimony could not be contradicted because 'it is our story'.

Commissioner Cox spoke about Jesus' role as a caring shepherd. She called on the congregation to trust him and to let him lead.

In his Bible message the General returned to his focus on God’s work of transformation. In response to the General’s words, hundreds of people moved forward to kneel at the mercy seat in acts of dedication.

The visits and meetings in the two halves of the territory included a variety of highlights. In Maharashtra, for instance, a presentation by 150 timbrelists recognised 150 years of the international Salvation Army. In Gujarat, representatives from the Bible Society of India, the Rev David Desai and Dr Samuel Chauhan, welcomed the international leaders on behalf of the society and all churches.

The visitors took time to meet cadets at the two training colleges, unveiling the foundation stone of a proposed prayer hall in Ahmednagar and dedicating to God a new prayer hall in Anand. Officers councils were also held in both locations.

At Evangeline Booth Hospital, Ahmednagar, and Emery Hospital, Anand, staff were encouraged by the visit of the General and Commissioner Cox. While opening five new rooms in Emery Hospital, the General told staff they were 'balancing the gap between rich and poor in that the much needed income from wealthier patients will help sustain the services of the hospital to those less well off.'

Thousands of people participated in marches of witness in Ahmednagar and Anand, with the General and Commissioner Cox taking the salute.

The visit concluded on India's Republic Day with a meeting for children and youth, attended by more than 500 young people. Having heard inspiring testimonies, the General offered encouragement through his Bible message. He told his young listeners that God knows their potential and wants to use them – he has a purpose and mission for every child and young person. In response to the message almost 60 young people knelt at the mercy seat.