The General Highlights Hope During Film Launch at IHQ 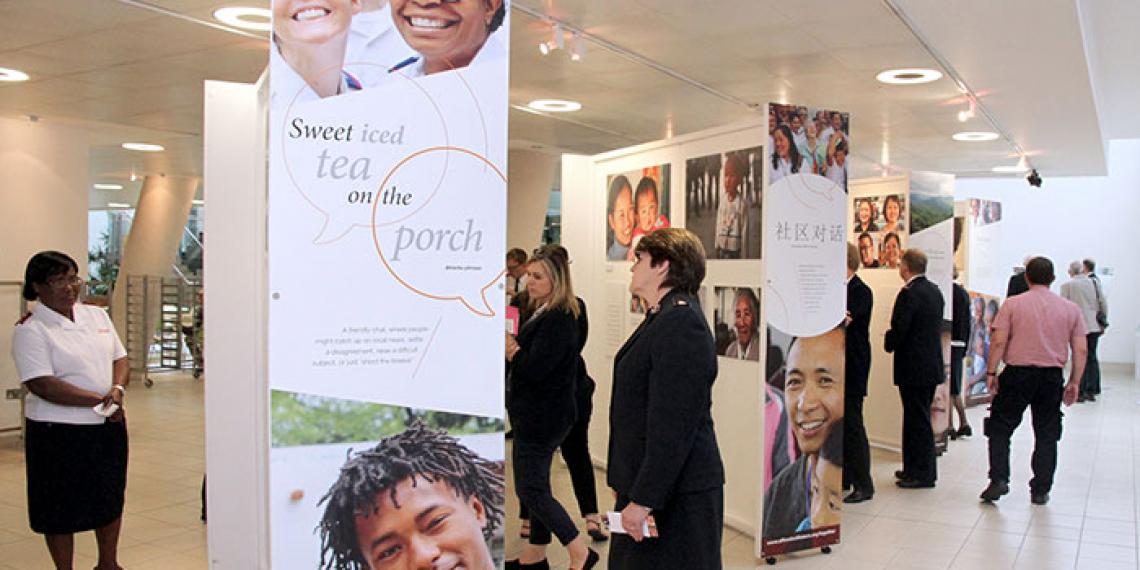 Speaking at the launch of Together – A Journey of Neighbourhood Conversations, The Salvation Army's international leader, General André Cox, described the new film as showing that 'in every situation there is hope'. He also told the audience at International Headquarters (IHQ) in London that the film 'sits well with The Salvation Army because we are a people of hope – we believe in transformation'. The première was attended by many officers and employees from IHQ, along with guests from a number of faith-based organisations.

Together – A Journey of Neighbourhood Conversations (#TogetherFilm) follows Salvationists Dr Ian Campbell and Alison Rader Campbell to four communities, in China, India, the USA and Zambia. It demonstrates the power of families and neighbourhoods working together to overcome their problems, with the Church playing its part through integrated mission and encouraging community conversations. The stories from India, the USA and Zambia included Salvation Army ministry.

Introducing the film, the director, Neil MacInnes, shared some of its background, saying that he had been 'challenged and changed' while visiting some 'extraordinary places'.

A panel discussion, hosted by Martin Lee (former director of Global Connections) considered some of the issues that came up in the film. Panellists were Commissioner Birgitte Brekke-Clifton (International Secretary for Europe, IHQ), Naar M'fundisi-Holloway (UK Territory with the Republic of Ireland), Ted Lankester (co-founder of Interhealth) and Ron Irwin (Echo International Health Services Ltd). Each person shared how the film had made an impact and also what lessons can be learned, such as the challenge to be in 'dynamic relationship' with a community and the reminder that – even in the most difficult of situations – people have strengths that need to be harnessed.

The General said he was pleased that IHQ had played a part in the launch of the film and that he had been struck by 'how poor we are in the West' because of the lack of a sense of community. He also highlighted the wealth found in strong communities and commented that much of the world needs to reconsider what is important. 'What makes a nation great,' he added, 'is not amassing wealth' – particularly when the wealth is not distributed fairly.

Ian Campbell thanked all the people who had been involved in the initiative before encouraging everyone present to 'be salt and let the light come'. Finally, before the audience was encouraged to go and look round an exhibition of Ian Campbell's photos, the two members of the IHQ Communications Section who had put the display together – Berni Georges and Kevin Sims – brought the event to a conclusion with a time of contemplation using the song 'When I Needed a Neighbour', with everyone challenged to ask themselves 'who is my neighbour?' and 'whose neighbour am I?'