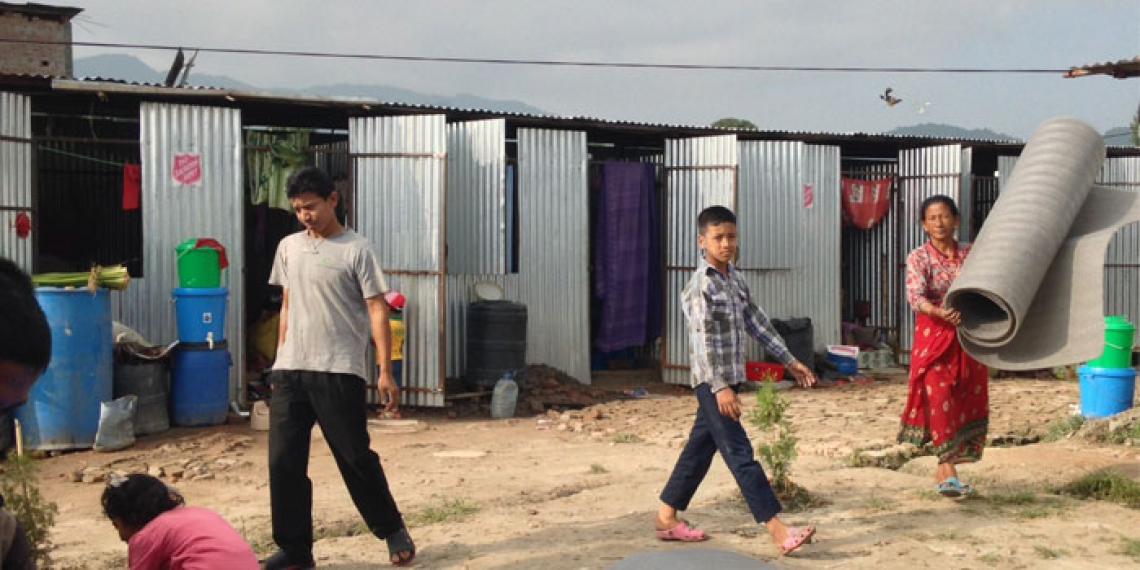 Six months after a 7.8-magnitude earthquake damaged or destroyed more than 700,000 dwellings in Nepal, with the loss of more than 8,500 lives, The Salvation Army's International Emergency Services team is closing down its operations in the country and handing over responsibility for the 'recovery' elements of Salvation Army work to a new projects and development team.

Nine projects have already been completed and closed, with seven more being wound down. The last emergency team member is scheduled to depart Kathmandu on 5 November, when a new team will move in with the specific task of working alongside local Salvation Army leaders and members to continue their community ministry in a country that is still coming to terms with a devastating disaster. Six new long-term projects are already in preparation.

The Salvation Army has provided food, tarpaulins and tents; built temporary learning centres and houses; constructed septic tanks and toilets for camps, communities and schools; managed refugee camps; provided thousands of quilts and blankets, hundreds of hygiene kits and kitchen sets, clothing and school books. Sometimes it has acted independently and at other times with trusted Nepali non-governmental organisation (NGO) partners, whose intimate knowledge of Nepali culture and resources have informed the team's actions and increased the value of each dollar spent.

International Emergency Services deployee Mary Jane Phelan – from USA Eastern Territory – has primarily been involved with camps for internally displaced persons in Bhaktapur – a close neighbour of Kathmandu and the site of one of the oldest and holiest of Hindu shrines. She recalls: 'This August, Jayandra – a dynamic young man, a leader in his community and a tireless worker for his neighbours – took us on a tour through the ruins of what had been a thriving community with centuries-old history. We saw piles of bricks and dried mud, half walls remaining of what had been a complex warren of homes, and stray dogs roaming the rubble. No people.

'The community members were living in a nearby camp called SanoByasi, where The Salvation Army has provided everything possible to facilitate a life with dignity for the 70 families sheltering there. And yet, as we prepare to leave Nepal, their future is still unsecured.'

In a neighbouring camp, using funds provided through The Salvation Army, Gopal G. has built a solar lighting system which, Mary Jane says, 'he proudly displays when we visit'. Women and children no longer have to visit the toilets in darkness.

Gopal wrote to thank the team that had helped him and his community, saying: 'You and your team appear as [a] messenger of God to uplift our life.' But further on he makes it clear that life is still difficult, adding: 'In previous days Bhaktapur municipality had provided us drinking water ... by truck [but] due to shortage of petroleum, vehicle is not operating ... we are facing problem of scarcity of water.'

Mary Jane explains that the fuel crisis in Nepal affects every project and every community: 'The quilt store has to close; cement vendors have no product; propane for cooking runs out; NGOs can’t reach target villages.'

The head of the new projects and development team, Captain Richard Vanlalnghaka from India Eastern Territory, is already in place and working with the emergency team members to learn about the most pressing needs and to ensure as smooth a handover as possible.

Mary Jane concludes: 'A desire to somehow make it all right lingers, but the International Emergency Services team leaves the country having changed thousands of lives and with an enormous sense of gratitude for the support it has received.'

Donations to The Salvation Army's ongoing ministry in Nepal can be made online through the IHQ secure server: Click Here.