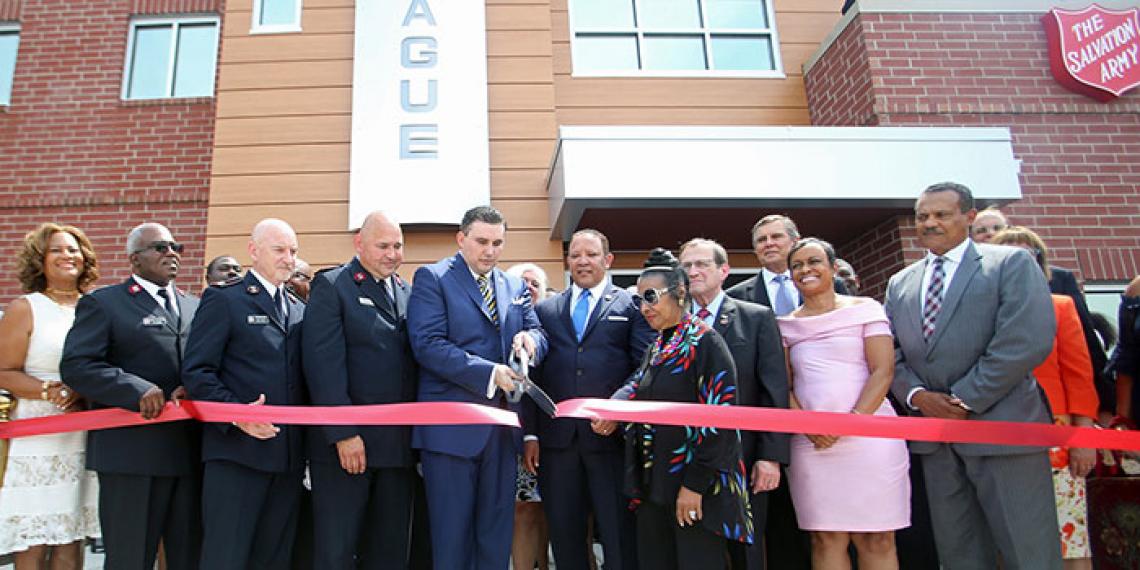 The Salvation Army in the American metropolitan area of St Louis, Missouri, is playing a significant role in rebuilding community relations in Ferguson, which was the scene of rioting and civil unrest in 2014 following the death of 18-year-old Michael Brown, who was shot by a police officer.

In partnership with the Urban League of Metropolitan St Louis, the Army has opened a Community Empowerment Center on the site of a QuikTrip store that was burned down during the civil unrest. The centre is symbolic of the hope, healing and progress it wants to bring to the community. Joining The Salvation Army and the Urban League in the centre to affect change are The Lutheran Hope Center and the University of Missouri-Extension.

'This is a wonderful example of four organisations finding that their unique missions have areas of overlap where we can partner to bring hope and healing to a community that has had its share of violence and unrest,' said Midland Divisional Commander Lieut-Colonel Dan Jennings. 'It is my hope that this centre will be the starting point of reframing the perception of Ferguson ... that from the rubble that covered this site in the aftermath of events three years ago, this would rise up to be a monument to justice, collaboration, resource and empowerment.'

The Ferguson Community Empowerment Center represents an unprecedented partnership between the Urban League of Metropolitan St Louis and The Salvation Army. The initiative grew out of a shared vision by former Midland Divisional Commander Lieut-Colonel Lonneal Richardson and Michael McMillan, president and CEO of the Urban League of Metropolitan St Louis. It is anticipated that the centre will serve thousands of people, not only in Ferguson but in north St Louis County.

The Salvation Army contributed US$1.4 million towards construction of the 13,000-square-foot, two-storey building. Occupying the second floor, it administers programmes and services for families and young people – all determined by a needs assessment study.

In addition to the provision of immediate assistance, Salvation Army caseworkers offer Pathway of Hope, an initiative to break the cycle of poverty for families by helping them overcome barriers such as unemployment or unstable housing.

For children, The Salvation Army offers Spark Academy, an out-of-school programme for third- and fourth-graders (aged seven to nine) that provides a safe space and opportunity for them to discover their gifts and talents. Seeking to help young people to develop and thrive as the person God intended them to be, the academy focuses on four main areas: depth (developing spiritual formation and strong independent character); responsibility (opportunities to serve others); community (gaining a sense of belonging); and spark (creating opportunities to discover their giftedness).

'It is important in moving into a new community to come with ears and eyes open to hear and see from people before starting up programmes,' said Major Gail Aho, urban missions secretary for the Midland Division. 'While we have presented two programmes to start with, both will give opportunity to meet and hear from our neighbours. We want to be flexible, just like the space we have created – flexible, open and available to become what is hoped for and needed.'

Speaking on 26 July at the grand opening which drew more than 400 people, including Michael Brown's parents, Commissioner Brad Bailey (USA Central Territorial Commander) said: 'Together, we are responding to racial inequity and human distress experienced in Ferguson ... We’ve come together today because we share a covenant to do what God wants us to do and to be what God wants us to be, as well as a divine sense of mission and desire to be engaged right at the heart of life-transforming mission on behalf of others.'