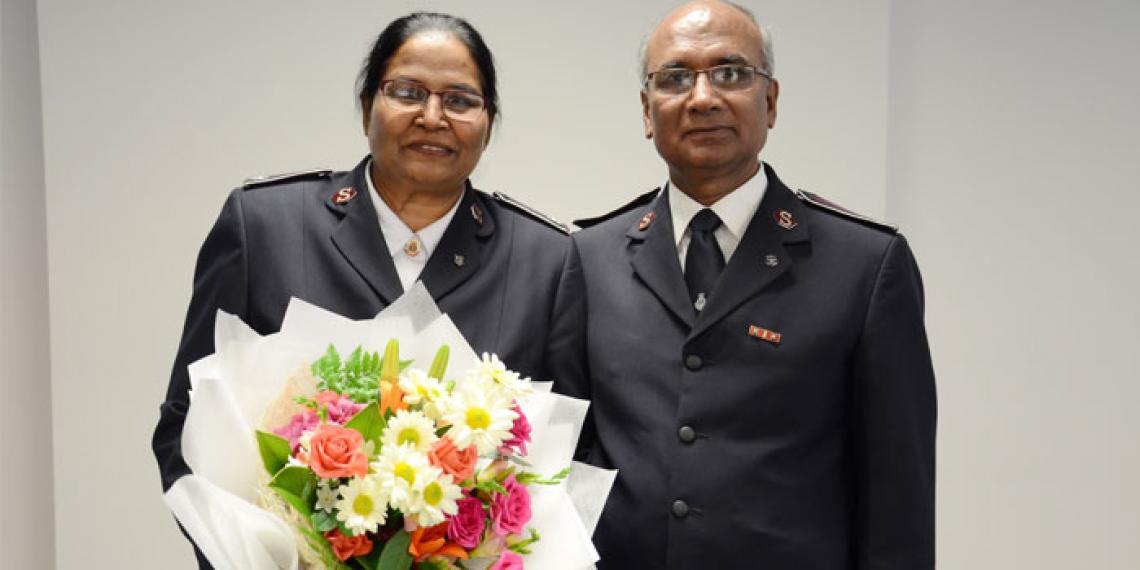 Lieut-Colonels Yousaf Ghulam and Rebecca Yousaf had mixed emotions when they left New Zealand on 3 June, after two years of service to the New Zealand, Fiji and Tonga territory.

Yousaf and Rebecca were appointed from The Salvation Army Pakistan Territory and have served as Assistant Chief Secretary and Assistant Territorial Secretary of Women’s Ministries. They would be both happy and sad to be leaving, Rebecca said. ‘We will be happy to see our children and grandchildren, but sad leaving our special family here—the very supportive, loving people. It’s been a very beautiful time.’

Christians in Pakistan face much persecution and their family had been facing death threats from Yousaf’s earlier work as Chief Secretary in that country. So coming to New Zealand had been a mental, physical and spiritual rest, Yousaf said, although it had also been a huge cultural shift.

Arriving from the 48 degrees celsius of a Pakistan summer to seven degrees in New Zealand, the couple was grateful to be met by Colonels Graeme and Wynne Reddish who were carrying coats for them. It was a sign of things to come, with people showing them generous hospitality and also introducing them to delicious Kiwi cooking, including their new favourite, roast chicken, Rebecca said.

Travelling round New Zealand was also a treat, especially visiting a glacier at Mt Ruapehu, Yousaf said. ‘That was more than an awesome experience, at the age of 60 to see that for the first time. When we loaded photos on Facebook our grandchildren were so surprised, they asked, “Why are they celebrating Christmas?” ’

Rebecca faced two big challenges in the move to New Zealand. When she arrived she spoke little English, so she took classes and read her Bible in English. People had been very encouraging, she said. The other challenge was wearing the New Zealand uniform, particularly the skirts, which were shorter than would be acceptable in Pakistan. Rebecca’s first day wearing the New Zealand uniform was extra nervous as it was the day the couple also met Salvation Army General André Cox in 2013.

Along with praying with them daily and always taking time to ask about their family or how they were, the Donaldsons had been extremely supportive when Yousaf and Rebecca’s son-in-law was promoted to Glory last year, Rebecca said. ‘The Commissioners were very quick to organise tickets to go home for the funeral and prayer cards and emails and flowers, and once a week Commissioner Janine would come to my office and pray with me for my family.’

Yousaf said they had learnt a lot from the way Salvationists in the New Zealand, Fiji and Tonga Territory worked and they would try to carry on the way people in the territory celebrated people’s achievements and the personal care and encouragement shown.

Commissioners Robert and Janine Donaldson said, ‘It has been an absolute privilege to get to know Yousaf and Rebecca. International service in The Salvation Army enhances all of those who meet and work together. Yousaf and Rebecca are fine examples of disciples who have complete and genuine faith in God, no matter what. They have set an example of consistency, courage, faithfulness, loyalty, teachability, gentleness, wisdom and adaptability. We will miss them and pray God’s continued blessing on their lives.’

Yousaf has been appointed Secretary for Programme in the Sri Lanka Territory, and Rebecca Sponsorship Secretary.