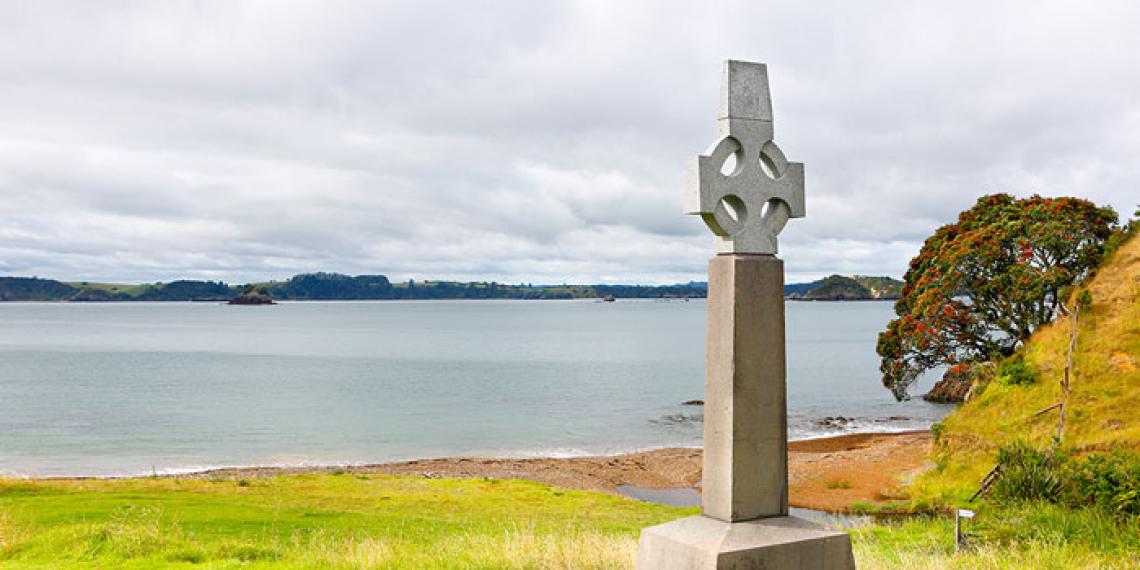 On 12 April 1799, the Society for Missions to Africa and the East (later renamed the Church Missionary Society) was founded at a meeting of the Eclectic Society, supported by members of the Clapham Sect, including Henry Thornton, Thomas Babington and William Wilberforce.

Samuel Marsden was a member of the Church Missionary Society (CMS) and chaplain in New South Wales, Australia. In that position, he frequently encountered Māori from New Zealand. Marsden lobbied for a Christian mission to New Zealand, and in 1809, missionaries William Hall, John King and Thomas Kendall were appointed to establish this mission.

On Marsden’s return from a visit to England in 1809 on the convict transport Ann, he met Ruatara, who was ill and neglected, vomiting blood because of the severity of his beatings on previous ships. Marsden cared for Ruatara, and on their return to Australia invited him to stay. Ruatara stayed with Marsden for eight months, before returning to his people in Rangihoua Pā at Oihi Bay in the Bay of Islands in 1812.

It was not until 22 December 1814 that the first CMS missionaries to New Zealand arrived with Samuel Marsden, coming ashore on the beach below Rangihoua Pā. Three days later, on 25 December 1814, Reverend Samuel Marsden preached the first Christian sermon on Oihi Bay to a congregation that included Ruatara, Korokoro and Hongi Hika. His words, translated for the gathering by Ruatara, were received with a rousing haka.

Ruatara left New Zealand in 1805 on the whaling ship Argo. He was perhaps 18 years old. He was to spend most of the next four years serving on various whaling ships. While at times he was treated well, he was often defrauded and abandoned by ships’ masters, and suffered starvation and beatings.

In 1809, Samuel Marsden was returning to Australia on the Ann, a convict vessel, when he discovered Ruatara, who was indeed ill and neglected, vomiting blood. Marsden ensured Ruatara was cared for and supplied with clothes, and invited him to his home at Parramatta upon reaching Port Jackson in Sydney, Australia, where he spent eight months.

It was here with Marsden that Ruatara developed a plan to introduce wheat to his people as a valuable food source and an export crop. Although not recorded, we can imagine that it was during this time that Marsden first talked to Ruatara about his vision for bringing the Christian gospel to Aotearoa New Zealand. It is also here that Ruatara studied European agricultural techniques, carpentry and other skills; he then left on the whaling ship Frederick with tools and a quantity of seed wheat. Sadly, he was again defrauded and abandoned, this time on Norfolk Island. Ruatara was rescued and returned to Port Jackson and did not finally reach home until about 1812.

On his return to Rangihoua, Ruatara found that Te Puna, the island community of Te Pahi, senior chief of Te Puna and Rangihoua, had been attacked by European whalers, who had killed many of the inhabitants. After Te Pahi’s death, Ruatara was recognised as the successor to Te Pahi’s mana. It is likely that at this time Ruatara took his second wife, Rahu, and his third wife—his first wife was Miki. Rahu seems to have been regarded as Ruatara’s senior wife and gave birth to their son in 1814.

At the time of his succession, Ruatara’s position was still open to challenge. He was young, and although his cache of tools, clothes and weapons brought him mana, his stories of foreign places provoked incredulity. Ruatara had also distributed seed wheat, but many refused to believe in its value due to their familiarity with root crops. It was not until 1814 that he had a crop that allowed him to prove wheat could provide bread and biscuits. It was in that same year that Thomas Kendall and others arrived on behalf of Marsden to consult with Ruatara about setting up a CMS mission. Marsden sent Ruatara gifts that included a hand-powered flour mill from which Ruatara was at last able to convince his fellow chiefs of the value of wheat.

Ruatara accompanied Marsden’s ship Active when it returned to Port Jackson, despite the concerns of his whānau. He returned again to Parramatta, studying European agricultural techniques and acquiring more tools and weapons. As he prepared to leave, he was given a mare, a cow and other livestock by the governor of New South Wales. This time, Ruatara was not leaving for Bay of Islands in New Zealand alone, Marsden’s vision of a CMS mission was coming to fruition.

The protection of mana

Ruatara returned to the Bay of Islands on 22 December 1814 with the first CMS missionaries, Thomas Kendall, John King and William Hall, as well as Samuel Marsden. Ruatara’s conduct was remarkable
—he risked his own mana to help the missionaries establish friendly relations not just with his own people, but with people throughout North Cape and Whangaroa. In addition, Ruatara helped the missionaries build houses at Rangihoua and let it be known that they were living under his mana—under his protection. He even escorted Marsden to the Thames–Hauraki area, at some risk to himself.

Mana is the power and authority that allows people to achieve their goals in life. Each of us is born with it, can build it through achievement and success, and can have it bestowed upon by the recognition of others. For chiefs—including Ruatara—mana was a precious community commodity, to be enhanced so as to pass it on to his descendants. For Ruatara to expend his mana in support of this new, alien but powerful god was a risk; perhaps a calculated risk, but a risk nevertheless. To take that risk indicates that Ruatara was convinced that the message of the gospel brought something new and beneficial to his whānau and iwi.

One of Ruatara’s first acts was to translate Marsden’s first sermon on Oihi Bay. During Marsden’s sermon, Ruatara’s people complained that they couldn’t understand his words, to which Ruatara replied: ‘they were not to mind that now, for they would understand by and by; and that he would explain [Marsden’s] meaning as far as he could’.

It was presumed by Marsden that the rousing haka at the conclusion of Ruatara’s translation was for him; but whose sermon was it? The haka was in support of the preceding speaker: Ruatara.

Historian Gavin McLean gives us a more complex picture of the thinking of Ruatara and Hongi Hika in this period. He notes that while Ruatara and Hongi Hika ‘listened politely and let children attend the stations’ schools’, they ‘rejected the low-church mechanic missionaries’ gloomy emphasis on an angry God’. Which is to say that Ruatara was not naïve. He entertained serious doubts as to the intentions of the missionaries. In Port Jackson he was warned that they were forerunners of settlers and soldiers who would take the country and reduce Māori to the wretched condition of the Australian First Nations, which Ruatara had seen for himself. Marsden reassured him by offering to turn back the Active on their journey to the Bay of Islands.

Ruatara always kept his own counsel and was never completely sure of allowing the missionaries to settle. Consequently, his aid was sometimes perfunctory, and he demanded payment for the land and the many services required by the missionaries.

Nevertheless, armed with new knowledge, skills and resources, Ruatara worked tirelessly for his people’s prosperity. He planned new wheat cultivations, some as far as 60 kilometres from Rangihoua.

He planned a European-style town, marking out the ground on a hill near Te Puna. He interrupted his activities to help the missionaries; for example, building the enclosure himself so that the Christmas service could be celebrated on the beach.

On 13 February 1815, Ruatara fell ill with a raging fever and symptoms of what appeared to be a heavy cold. By 19 February, when Marsden learnt Ruatara was ill, he was experiencing pain and death was imminent.

Ruatara’s whānau, following their tikanga, made the place where he lay tapu (which would have prevented Marsden visiting his friend), but Marsden threatened to raze Rangihoua to the ground with the Active’s big guns. Ruatara’s whānau, wishing to avoid conflict, allowed Marsden to see him. Marsden and the other missionaries gave him food and medicine without effect.

Finally left to protect his mana in his final days, Ruatara’s whānau carried him to a shelter on the hill at Te Puna, and the following day he died there. His wife, Rahu, hanged herself the next day. In April, Ruatara’s remains and those of his wife were carried inland to Motutara.

Why would a chief who had suffered through significant abuse at the hands of the English, who was an heir to authority over his people with his own vision and drive, risk his mana to allow English missionaries to introduce a new atua, a new philosophy, a new theology to his people?

To answer this salient question is to understand the experience of Ruatara overseas. Ruatara was born into a complete, holistic, but isolated world. A world whose philosophy, theology and knowledge were sufficient for an environment and people set apart from the wider world. However, as an 18-year-old, Ruatara left on a ship for a bigger world. It is not remarkable that he was transformed; it is remarkable that he was able to re-imagine and integrate the world of his people into an almost incomprehensible new reality.

However, his introduction of a CMS mission is more significant as the first formal, conscious and curious engagement of Māori with a new God. Ruatara has proven to be a bridge.

Two hundred years later, may we celebrate him as a pathway for God’s revelation here in Aotearoa New Zealand in the same way we celebrate Marsden as a person who walked upon that pathway.

Graham Bidois Cameron is of Ngāti Ranginui, Ngāti Rangiwewehi and Ngāti i Hinerangi descent. He is married with four children and lives in Tauranga Moana.  Graham studied Māori Studies and Sociology at Victoria University, has a Postgraduate Diploma in Theology and is currently studying for a Masters in Theology with Otago University. He writes the First We Take Manhattan blog (www.firstwetakemanhattan.org).