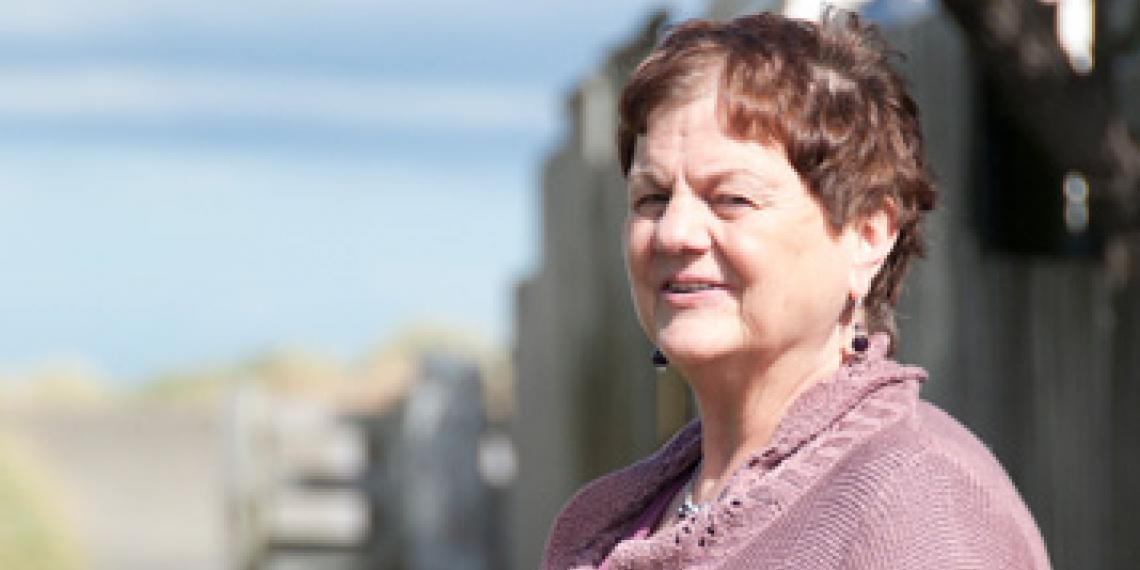 Therapist Ferrell Irvine describes the Twelve Steps as a ‘spiritual growth journey’ for everyone. Based on the original Alcoholics Anonymous steps, Ferrell developed the course for The Salvation Army and has been running it since 1996. ‘People make changes in the seven-day workshop, that will usually take two years in regular therapy,’ she says.

It was Major Harold Hill, then corps officer at Wellington City Corps, who approached Ferrell, a bio-energetic psychoanalyst, which means someone who works with both the body and psychology. She says he asked her to work with some of the ‘screwed-up people’ involved with the corps (church). But Ferrell turned the challenge back on him and his staff, observing that they were workaholics and needed to do the Twelve Steps.

Instead of baulking, Harold and eight colleagues met with Ferrell for two years, working through the steps. It was a revelation: ‘There were many insights and moments,’ says Harold. ‘But for me, one of the big things was realising that you can be a Salvation Army officer who works too much, or an officer who cops out, but really you’re both reacting to the same thing. They are just two different management systems to deal with fear or anger.’ Harold’s wife, Pat, worked through the steps at the same time and says it simply saved her life.

Since then, Harold has worked with Ferrell to develop the Twelve Steps Workshop for the wider Salvation Army. Literally hundreds of people have worked through the steps, and it’s now regularly run for officers, Salvationists, cadets (officers in training) at Booth College of Mission, and others.

Ferrell knows first-hand the life-changing power of the Twelve Steps and, more importantly, the Higher Power at work behind the process. She grew up in a middle-class American home, where both her parents believed themselves to be Christians. Yet they both drank heavily. ‘I carried with me my father’s demanding perfectionism. I don’t remember anything about forgiveness and mercy,’ she says. ‘In my relationship with my mother, she could be quite blaming, so I grew up believing I made her drink, and caused Dad’s heart attacks. I really thought I was like Darth Vader—that I could just take a deep breath and they would die.’

Ferrell recalls vividly the first time she discovered alcohol, when she was 19 years old: ‘I remember being at a bar and watching everyone dance, and I was just terrified of making a fool of myself. Someone handed me a beer, and the next thing I knew I was on the dance floor having a great time. Suddenly, I had found a really good way to manage my fear of what people thought.’

Talented in maths and science, Ferrell went to university to study atomic physics. She got a reputation for ‘drinking everyone under the table’ and was often challenged to drinking contests. She didn’t do as well at university, only later realising this was an act of self-sabotage. But she was working in a psychiatric unit at the time, and as a result, discovered her life vocation in psychology. She completed a Masters of Psychology with straight-As while working fulltime at the unit—and living a party lifestyle.

‘There were a couple of instances where I got into huge fights, and I felt like I was looking down at myself. What terrified me was that I was like my mother.’

By now, she had her own psychotherapy practice in Chicago. One of her patients was attending Overeaters Anonymous (OA) and introduced Ferrell to the Steps—‘it was my patient who Twelve-Stepped me,’ she remembers.

It was on a Twelve Step retreat that Ferrell met the real Jesus. ‘I’d only ever seen Jesus depicted as a thin white man with long blond hair, but above the fireplace, here was this picture of Jesus the hunk! He was Jewish, with dark eyes and dark hair. It felt like his eyes followed me wherever I went.

‘I sat in front of the picture and said, “I have no idea what I need.” I heard his voice saying, “Follow me and I’ll meet your every need.” So, from then on, it was a done deal.’ Ferrell had her last drink in 1982 and found Jesus in 1983. She then spent the next five years ‘learning that God is love’.

With tears in her eyes, Ferrell recalls nursing her mother for six months as she was dying. ‘God gave me that time and it changed me completely. I had loving words for my mother every day; I was able to show mercy. She didn’t change, but I was completely changed.

‘You can work through your anger and your hurt at people, but you’re not completely healed until you can love them.’

In 1991, Ferrell felt led to come to New Zealand, and she soon knew why: ‘This is a shame-based culture. That’s why there is such a binge-drinking, a gambling culture and so much sexual abuse,’ she says. ‘In America, patients would only show up with shame when they had been abused; but here, shame seemed to be a part of almost everyone.’

Settling into life in New Zealand was ‘hell’ at first, she says. As an extroverted American, clashing with a culture steeped in shame and self-depreciation, Ferrell felt she ‘couldn’t make a friend’. ‘I would sit at a restaurant table with a glass of water opposite me for Jesus. I needed to know he was there with me, otherwise I wouldn’t have got through.’

Feeling called to ‘lengthen the cords of her tent’ in New Zealand, she set up bio-energetic practices in Wellington and Christchurch. By the time she met Harold, she already had 200 people on her waiting  list. But developing the Twelve Steps Workshop has been a God-given role: ‘The steps are a shame-reduction programme,’ says Ferrell. ‘Shame is soul-murder. At the base of things, it’s the belief that “I’m worthless”. It’s a spiritual issue, and no human being can deal with it alone.’

Ferrell loves helping people find freedom from shame and finally understand they are loved by God—like the woman in prison who came to Ferrell sobbing and talking about her abuse for the first time. But she had a question, which Ferrell says is a great one: ‘Why me?’

‘I said to her, I have another question, “What if you have a belief that you’re valuable?” She sat back and got it. Her whole body just glowed.’
Through the Twelve Steps, Ferrell continues to spread the message that we are loved and we are valuable. ‘I used to be terrified about getting it right, and terrified about what other people thought. And I was deeply ashamed about who I was.

‘Today, shame doesn’t run my life, and last time it tried, I laughed out loud. I’m pretty alive and I have a very deep faith in the God who loves me’

By Ingrid Barratt (adapted for web from War Cry magazine)

For more information on the Twelve Steps Workshop, contact The Salvation Army Centre for Leadership Development, which runs this short course.