Basketballer CJ Bruton says all he is and does, is because of his parents. 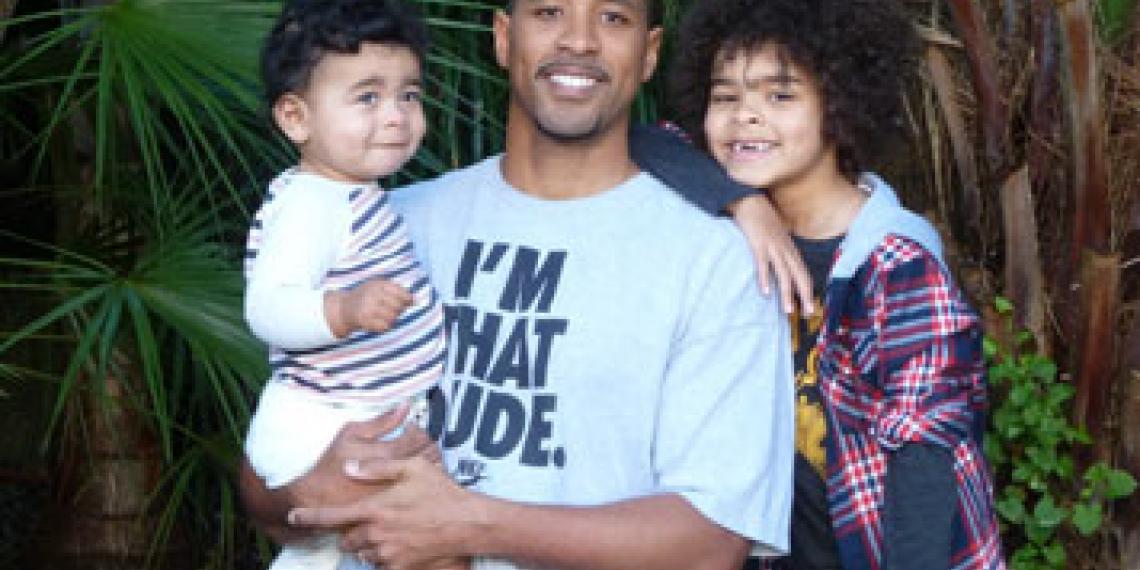 Basketball has been a significant part of CJ Bruton’s life since the day he could walk.

It has opened many doors, taken him all over the world and brought him success and fame.

But if you were thinking shooting hoops is solely what CJ identifies as the main reason for his triumphs and reputation, you’re mistaken.

Basketball is a major factor, but CJ says what has moulded him into the man he is today, are his mum and dad.

CJ looks up to his father, Cal Bruton, with enormous reverence. Like father, like son, Bruton senior was also a professional basketball player and is extremely well known and respected in Australian basketball circles.

Originally from Queens, New York, Bruton Snr was one of the first imports to play in the Australian NBL (National Basketball League), joining the Brisbane Bullets in the competition’s inaugural season in 1979. He averaged over 33 points per game that year, topping the league’s scoring list.

A few years later, Cal became an Australian citizen, representing his adopted country at the 1986 world championships in Spain. He was one of the first inductees into the NBL Hall of Fame when it opened back in 1998.

It didn’t take long for Bruton Snr to relocate his family to Australia after he commenced playing there. A pretty good move in the end, you’d have to say, as it laid a strong foundation for CJ’s career and life.

‘My father got a great opportunity to come to Australia when the NBL first started’, says CJ. ‘After one year of playing, he came back to the United States and grabbed my older brother, myself and my mother, packed up and left the US for good. Obviously, with all the crime that was going on there, he decided the best way to raise the family was to come to Australia.’

CJ was only three at the time, but that’s when everything got going for him. He got into basketball himself, and from an early age it was obvious he was a star in the making. But it was the lessons from his dad that grounded him.

‘The game of basketball has taken me everywhere’, says CJ. ‘I’ve been all over Australia and the world because of basketball, and I’ve achieved a lot of goals. As a kid, basketball gave me a big drive [to succeed], but it also gave me a role model, someone to look up to. And for me, that was my father. Seeing what he was able to do not only on the court but off the court really drove me. What he did in the community, what he did for my family, and just the fun times that we had while growing up; I mean, we still talk about those days even today. But he also told me about commitment, communication and right from wrong.’

CJ says his father was the first kid in his family to go to college (university) and to get out of New York. His path of getting there wasn’t one of ease, and it made a lasting impression on his basketballing son.

‘I remember him telling me a simple story of how all his friends were either getting shot or doing drugs, and his way of getting out of all that was by playing basketball and going to school,’ says CJ. ‘Dad was involved in the YMCA program back then, which meant he still had to be in the wrong neighbourhood to get there, which he always ended up getting chased out of. But he was still able to communicate with other kids and work hard. He’s definitely been a great role model in my life!’

When it comes to basketball and his off-court commitments, CJ’s father has obviously been a big influence on CJ’s life. But it was his mother that put something into him that ultimately became an equally strong aspect of who CJ is today—his walk with Jesus.

For as long as CJ can remember, his mother, Trish Newman, has been teaching him about faith and the ways of God. ‘The Christian part of me came from my mother,’ CJ explains. ‘From a very young age my mother was always preaching to [the family] that the Lord has blessed us and provided for us, and that everything we have is not just by working hard, but because the Lord has given it to us and put this in place for us.’

This is a lesson CJ has never forgotten, even during those times when he was off track in his walk with God. He has always been grateful to his mother for showing him that God was good and teaching him that God would bless and provide for him.

Self-discipline was another feature CJ’s mother established in him, although he admits at times it wasn’t pretty. ‘I remember the days when we were told, “You better be at church!” My mum would say we better be in the car by 8:30 am to go to church. And if we weren’t in the car by then, we had to run to church, because she’d be gone but still expected us to be there. At times we’d be in our buttoned-up shirts and church shoes running to get to church, sweating by the time we got there to see my mum singing,’ he laughs.

The benefits of that lesson extended beyond church attendance. CJ says doing things on time and in order has helped his career vastly.

The example of his mother’s dedication and commitment has also stayed with him. ‘My mum would do my father’s job while he was away, just to get us from A to B. She would always get me to school, from school to basketball, and then from basketball to back home. And when you’ve got two other brothers and we all go to different schools, seeing her dedication was a big motivator for me.’

Passing on the wisdom

CJ is now a proud parent himself, the father of two boys, Rio (5) and Roc, who turns one next month. Making sure a strong foundation is established for both boys, similar to the one his parents established for him, is CJ and wife Jessica’s main priority. The couple have started teaching Rio about Jesus and are already confident he will grow up to live a great life by knowing Christ. ‘We take him to Sunday school,’ says CJ. ‘We also talk about the Lord to him as well as read to him. Now that he’s at school he’s reading to us, which is great.’

CJ admits that Rio’s first prayers were a work in progress. ‘Rio loves the Lord and says his prayers, although when he first started out he was praising Thomas the Tank Engine and thanking the Lord for every one of his Thomas trains. So I said to him, “What about your aunty and your grandma ...?” And after a while he realised, even so young, that many other people needed prayer.’

There’s no doubt that CJ is an immensely proud dad—one who wants to lay the groundwork for the men his boys will become. ‘Just the fact that Rio is a warm, kind, giving and loving child who knows about the Lord is awesome!’ says CJ. ‘I think there’s nothing better than being brought up in a church and seeing what the Lord can do for you at a young age, so as you get older it’s already embedded in you.’

Having Jesus in his life has helped CJ tackle the many challenges of being a pro basketballer. Surrounded by a sporting culture that includes drinking and partying, being in the public’s eye as a celebrity almost 24/7, and balancing sporting commitments and time on the road with family responsibilities can be a difficult life.

CJ made his debut as a professional basketball player in 1994, so he’s had to deal with this kind of lifestyle for 18 years. He’s learned to overcome its challenges by making sure he doesn’t neglect his time with God. ‘On the road it can be difficult at times, but you still have your Bible and your prayer time. Your commitment to the Lord itself and having strong faith—you can’t let that get out of reach,’ he says.

Having Christian team mates that are just as strong in their faith walk has been a big bonus, he says. In the NZ Breakers, he’s really appreciated the support of fellow Christian and Kiwi basketball star Kirk Penny.

‘Over the last six or seven years I’ve always played with a Christian guy in my team. We have Bible studies and we pray before games—and it’s an edge. That’s why I play with a lot of confidence every time I get onto the basketball court,’ CJ explains. ‘So as an athlete, it’s not a requirement for me [to have another Christian around], but having someone else that goes to [spiritual] war with you before you really go to battle is definitely important. Also, away from the courts having those Christian friends can be a big help in your walk.’

But things weren’t always so clear. ‘I went through a stage where as an athlete all you want to do is achieve your goals—and I was achieving them. But when I did, I realised that I felt empty. I was even winning big awards, but at the end of the day, I still felt empty.’

One day CJ was taking a trip with his mother in the US. They were driving early in the morning when, out of nowhere, the back of the car was hit by another vehicle. ‘I remember spinning around in a circle,’ says CJ. ‘My mum put her hand on my chest and I just let the car spin until it slowly came to a stop. There was a truck driving right next to me that ended up denting the car up a bit. It was one of those moments where I felt the Lord saying to me, “I can take your life anytime I want, especially with you not appreciating what I have done for you.” And that was a real eye-opener for me.

‘That night I remember just lying there feeling all lost and saying to myself, “Is that all you get for sport?”  My mum then said to me, “There are a lot of kids out there that need and want to see you. You can have an impact on their lives.”

After that, CJ started to dedicate himself  to more causes off the court, which he says brings him a lot of fulfilment. He started to visit children at hospitals and takes some of them to games. After he scores his first goal, CJ points to the sky—that’s in recognition of the kids who can’t get to his games, to show he’s thinking of them.

‘As I tell everyone today, especially the kids, “I’m here because of the faith God has put in me and the faith my family has implanted in me. This is where God has guided me.”