There and back again | The Salvation Army
Skip to main content

Home / Church Community / Articles / There and back again

There and back again

Lieut-Colonel Gordon Daly looks back on over 35 years as a Salvation Army minister. 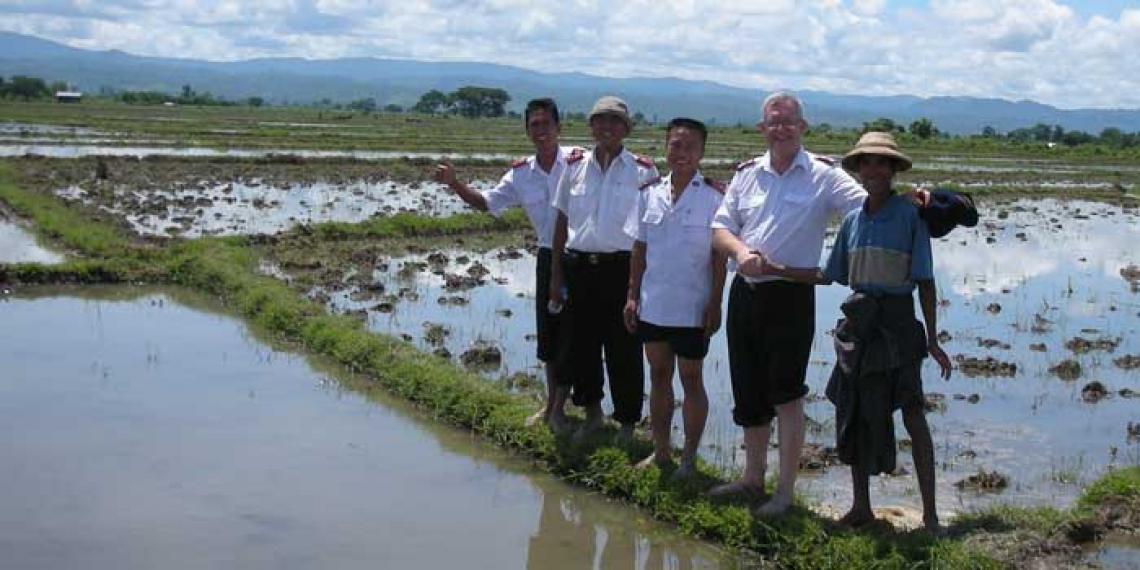 We had just become the corps officers (church pastors) at Winton Salvation Army after 18 months in our first appointment at Riverton. Our son Matthew was six weeks old and we were showing him off at officers meetings in Dunedin.

One of the speakers was Major Ray Allott. Like many other New Zealanders who have served overseas, he and his wife Coral were ‘legends’ in the country where they had served for many years. Ray spoke about Chile and his sadness at not being able to return there. It was the sort of presentation that young officers listen to with polite attention and not much more, yet in that moment a conviction came to both of us that we must go to Chile and take up where Ray and Coral left off.

Fast-forward more than 33 years and we find ourselves with responsibility for the work of The Salvation Army in Portugal. Not something we could have imagined back in 1979!

Portugal is on the west of the Iberian Peninsula with a population of about 10 million. It is dwarfed by its neighbour Spain. The Roman Catholic Church arrived in Portugal  in the seventh century and Catholicism established itself so firmly that there is a saying ‘to be Portuguese is to be Catholic’. Portugal was the only country in Europe untouched by the Protestant Reformation of the 16th century, and Protestantism didn’t arrive in Portugal until the 19th century.

The Salvation Army began its work in Portugal in 1971, in the closing years of the Salazar dictatorship that ruled the nation with an iron fist and strict adherence to Catholic doctrine. The Carnation Revolution of 1974 brought long-awaited freedom to the country.

However, after 48 years of dictatorship, uniforms and discipline were not exactly draw cards as The Salvation Army began to establish itself, let alone its stance on abstaining from alcohol, which is so much a part of life in southern Europe. Nevertheless, there was slow but steady growth and several corps were established.

When independence was granted to all the Portuguese colonies in Africa, a million Portuguese returned to their homeland. Many lived in dire poverty and The Salvation Army arranged sponsorship for needy children. This led to a period of growth, especially in Lisbon. However, when the sponsorship abruptly ceased in 1991, the Army’s work among children collapsed overnight and five corps in Lisbon became just one corps.

The Portugal Command is now by far the smallest command in the world and the work is not easy. Yet among the small group of officers and soldiers there is a real sense of joy and optimism that belies circumstances. In January 2012, a three-year action plan was put in place that places emphasis on prayer and spiritual growth. In practical terms this plan has a strong emphasis on corps being closely involved in their communities rather than isolated from them.

Salvation Army social services in Portugal are heavily supported by the government and provide a very professional service to the community. There are two homes for elderly people, which between them provide care for 80 people as well as homecare services for the elderly. A children’s home provides temporary care for up to 15 children from three months of age to 12 years who are sent by the authorities because they are in situations of neglect or abuse.

The Porto Corps in the north of Portugal runs a day care centre for 35 elderly people and homecare services for a further 65. In central Lisbon a community centre provides food and clothing to the needy, and three nights a week carries out a soup run in the city, providing nourishment for over 200 people each evening. Perhaps the best known social institution is the Xabregas Homeless Shelter, which has capacity for 65 men and 10 women. As well as providing basic accommodation the shelter runs a number of programmes aimed at the reinsertion into society of homeless men and women.

The five Salvation Army corps are small and are mostly financially dependent on funding from The Salvation Army’s international Self Denial Fund. Salvationists around the world can be proud of the vibrant and faith-filled worship that takes place each week and the meaningful ways that officers and soldiers seek to engage with a nominally religious yet highly secular European society.

Summer camps are much looked forward to in Portugal. Starting  with a junior soldier weekend, followed closely by a women’s Bible conference, children’s camp, young people’s camp, and music and creative arts school, these events bring people together as a larger group where everyone enjoys the fellowship and the teaching. Portugal’s young Salvationists look forward to music school from year to year and love participating in united band and vocal groups. It’s a highlight of their year.

It’s a big leap from an officers council meeting in 1979 to southern Europe in 2012! So what happened after that life-changing moment in Dunedin? Well, we wrote to our leaders, naively believing a couple of 23-year-olds with a baby would be snapped up for service in Chile. Not so. Our offer was politely declined in 1979 and again in 1980, 1981 and 1982, when our second son, Andrew, was born.

Finally, early in 1983, our leaders relented, but they said it was too difficult to get into Chile, so we would be appointed to the Caribbean Territory instead. This was before the days of the internet, cheap international calls or even faxes, and communications were slow and confusing. After a travel itinerary that defied understanding and became a comedy of errors, and a week’s orientation in mid-summer Jamaica, we found ourselves the corps officers of the Port-of-Spain Central Corps in Trinidad and Tobago. Our son Matthew was four-and-a-half and Andrew was just 13 months old.

A challenging learning and unlearning process began as we grappled with a new culture and climate, along with living conditions we could hardly have imagined for our little boys. After a year we were given added responsibilities at divisional headquarters as divisional secretary and divisional league of mercy secretary, and just to keep us busier we were placed in charge of a hostel for 109 men. This was all very challenging and marked our lives forever. But it wasn’t Chile, which is where we so strongly felt God wanted us to be. It was a small miracle when, in late 1984, our leaders advised us that we were being transferred to the South America West Territory.

In January 1985 we arrived in the beautiful city of Santiago, Chile. And so began nine wonderful years of service in a country that became our sons’ second home. It had taken six years but we had finally reached the place we felt called to.

Thoughtful leaders gave us appointments at territorial head-quarters as we grappled with the Spanish language—and after a year we were appointed corps officers of the marvellous Santiago Central Corps. There is no house in the suburbs nicely removed from the corps building for corps officers in Chile. Our apartment was literally above the platform of the corps hall, and there were activities every day of the week.

The two years we spent at this large thriving corps were certainly among our most satisfying years of spiritual and pastoral ministry. But we were also excited by the next challenge of leading the officer training college for the territory, which is made up of the nations of Chile, Peru, Bolivia and Ecuador. In addition, Susan had varied appointments at territorial headquarters including child sponsorship and women’s auxiliary. In six years at the training college we had the joy of training about 100 future officers, the majority of whom are still faithfully serving in various parts of South America and beyond.

Closer to home … for a while

With one son at high school and the other due to enter intermediate school the time came to say goodbye to South America. From the frenetic pace of Santiago we were transported, in January 1994, to the quieter environs of the city of Dunedin for two years of enjoyable ministry and re-adaptation to New Zealand life at Dunedin Fortress Corps. This was followed by five wonderful years as corps officers at Auckland Congress Hall.

Three years as divisional leaders of the Central Division didn’t decrease our sense of calling to overseas service but it was a surprise to be asked to go to Fiji in 2004 to lead the work there.

What a wonderful experience to serve alongside the friendly Salvationists of Fiji! The division is part of the New Zealand territory, yet it is refreshingly (and sometimes frustratingly) different. It was a great joy to be part of the growth and development of the work there. We had completed more than five years in Fiji when a phone call came with the request that we consider an appointment as regional officers in Myanmar (Burma).

There seemed to be no reason not to accept the new challenge, and on my birthday in 2009 we landed at Yangon International Airport to be met by some of the wonderful Burmese Salvationists. Life was very different—we were only permitted to enter the country on a 10-week visa, and renewing our visas meant routine trips back to Singapore for the formalities.

Another novel feature of life in Yangon was the fact that we were not permitted to live in private accommodation. So we took up residence in two unserviced rooms in a comfortable hotel and got to grips with the large and diverse work of the Salvation Army in Myanmar.

In Yangon there are three corps, a regional headquarters, officer training college and two children’s homes. The region is divided into four districts, with district officers and headquarters offices, and there were 38 corps, 20 corps plants and over 100 officers and corps leaders. We loved the work there and thank God each day for the faithfulness and perseverance of the Salvationists in that land.

The phone call came only 18 months into our term in Myanmar: ‘The General asks if you would consider moving to a small command in Europe.’ Leaving Myanmar was a far harder decision than going there. But in Lisbon in October 2010 we found ourselves in yet another airport greeting yet another group of people, smiling sweetly but sizing us up at the same time.

After more than 35 years as officers—over 18 of them outside of New Zealand—we never fail to be impressed with the international Salvation Army and the genius of the Self Denial Appeal, which makes mission happen all around the world. It’s been quite a journey, and it’s not over yet!