Go and Tell | The Salvation Army
Skip to main content 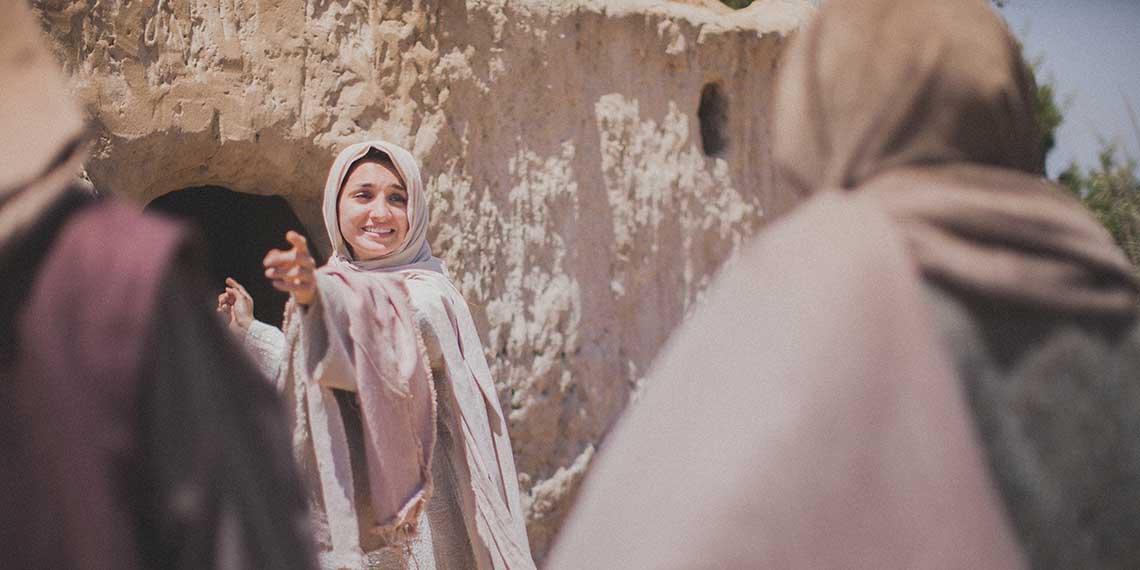 The resurrection of Jesus Christ is the linchpin of the Christian faith—the whole point of the Easter story. The tomb is empty. Jesus has risen! Sin has been atoned for, death defeated and the grave conquered. Christ’s resurrection changed everything, for everyone, everywhere, and for all time. It may have been the end of an horrific weekend for Jesus and his followers, but it was just the beginning of a whole new chapter in human history. And women were given a very special role.

Jesus entrusted the news of his resurrection—the biggest news of all time—to women. Women who, at that time in history, were deemed unreliable witnesses, simply because they were female. But Jesus was doing something new—something powerful and unprecedented, yet again.

Territorial President of Women’s Ministries Commissioner Julie Campbell says, ‘It was hugely significant for Jesus to take the greatest message of all time and give it to women—it was empowering! This was freedom and release from the restrictive cultural norms of the day. This is Jesus saying to women, you’re valuable, you matter in my Kingdom and you have a part to play. When I look at Jesus’ life and his teaching, and the way he treated women, he was inclusive. There’s nothing in his teaching that says this is only for men.’

When Jesus appears to Mary in John’s Gospel, not only is she filled with grief and sorrow but now she’s confronted with the shock of the empty tomb. But Jesus says to her, ‘Woman, why are you crying? Who is it you are looking for?’ Mary doesn’t recognise him at first—not until he gently speaks her name. ‘Mary,’ Jesus says.

And suddenly she recognises her Lord and cries out, ‘Teacher!’ And what does Jesus say? He asks her to, ‘Go and tell’.

Can I Get a Witness?

Jesus was criticised during his earthly ministry because he allowed a ‘fallen woman’, such as Mary Magdalene, to touch him. But Jesus showed Mary nothing but love and acceptance. He extended mercy by casting out seven demons and bringing healing and peace to her life. And he chose Mary—Mary—to announce the news of his resurrection to the disciples.

Even before the resurrection, Jesus spent time at a well during the hottest part of the day with another woman of disrepute who’d been excluded from polite society. And what happened? John records that, ‘Many of the Samaritans from that town believed in (Jesus) because of the woman’s testimony’ (John 4:39).

Julie Campbell explains, ‘Jesus singled her out. He explained the Scriptures and delved deeply into theology with her. And the whole community was saved because of the witness of just one woman.

‘Jesus also rewarded the boldness and faith of the woman in the crowd who touched his robe. He saw her—knew her suffering. And he singled her out too, but not to shame her—to heal and release her. How many lives were transformed that day because of her boldness and her faith—because Jesus saw her and valued her?’

Jesus entrusted the news of his resurrection—the biggest news of all time—to women.

To Speak Or Not To Speak

Imagine, if you will, if Mary and the other women recorded in the Gospels—Mary the mother of James, and Salome—conformed to the societal strictures of that time and kept quiet, instead of embracing the freedom Jesus offered and undertaking the special mission from their Saviour to ‘Go and tell’.

Imagine if the women who appear in the Book of Acts and beyond—women upon whom the Holy Spirit was promised and poured out—kept the message to themselves because society had decided they wouldn’t be taken seriously.

What if Lydia, Dorcas, Rhoda, Phoebe, Tryphena and Tryphosa, Persis, Julia, Chloe, Priscilla and all the other women whose names aren’t recorded, kept the good news about Jesus, and what God had done in their lives, to themselves? Can you imagine?

Church history reveals that throughout the centuries many limitations were placed on women, all in the name of God and supposedly based on Scripture. But the call for women to be fully included in the proclamation of the Gospel endured despite such opposition.

Allies for equality, like the radical egalitarian leader of the Moravian Church, Count Zinzendorf (1700–1760) is one example. Zinzendorf stated, ‘It is odd, when the Holy Spirit says: “Your daughters shall prophesy”, that we [the church] say, “They shall not prophesy”.’

God continually raised up radical reformers, who were bold enough to go against the grain of society and the mainline churches and fight for that legacy of freedom and inclusion for women. William and Catherine Booth included equality between men and women in the founding documents of The Salvation Army nearly nineteen centuries after Jesus first invited women to ‘Go and tell’.

Imagine if Catherine Booth chose not to respond to the prompting of the Holy Spirit and stand up and speak? Or if her husband, William, forbade her?

Imagine if Catherine Booth had never been exposed to the teachings of Phoebe Palmer, dubbed the ‘Mother of the Wesleyan Holiness Movement’? The Booths’ incorporated Phoebe’s sanctification teaching into the Army’s foundations. What if Phoebe had stayed silent?

Imagine if Catherine never wrote her famous pamphlet: ‘Female Ministry’, or ‘Woman’s Right to Preach the Gospel’, in 1859, where she outlined a solid scriptural defence for the full inclusion of women in ministry. Can you imagine The Salvation Army without active female participants and leaders?

Like Catherine Booth, Julie Campbell doesn’t believe God would prevent half the body of Christ from attending to the urgent work of the Great Commission, based purely on gender.

‘When I think of the Great Commission, Jesus didn’t say, It’s just the men who must go out and make disciples; nor did he stand up and make a big proclamation that said, From now on I’m going to allow women to go…; he just gave that commission to everyone who was there that day. If we’re passionate disciples—regardless of whether we’re male or female—we’ll be demonstrating the love of God and discerning when and how to proclaim the message using our gifts and abilities.’

In Galatians 3:28, the Apostle Paul explains that through faith ‘there is neither Jew nor Greek, slave nor free, male nor female, for you are all one in Christ’. And yet still some churches today consider Paul’s firmness with the women at Corinth—a specific group of women, in a specific church, at a specific time in history—as evidence for the exclusion of women.

‘The New Testament is beautifully subtle. We can get stuck on a couple of passages and miss so much. The New Testament shows more than it tells. What does Jesus’ interaction with women reveal? There are so many examples of women being included and valued, speaking and leading,’ affirms Julie.

As Salvationist women and men, we belong to an incredible legacy of liberation and freedom for women. We’ve been on quite a journey as a movement over the past 150 years, sometimes taking backward steps. And yet, The Salvation Army’s foundational commitment to equality of opportunity for both women and men remains intact and is being strengthened every day. But we cannot take that freedom for granted. More than ever, we need to exercise it and work together to see all women everywhere walk in that same freedom.

‘This is what we celebrate at Easter,’ Julie affirms. ‘Throughout the New Testament men and women both found freedom in Christ. Jesus came to give us life in all its fullness—it’s lifechanging for everyone! I love that Jesus didn’t just intend this new life to be for one gender or one people group. He didn’t come to hinder us and say, No you can’t do that, he came to set us free!’

Given the value with which Jesus treated women, the dignity he showed them, and the mission he entrusted to them at the tomb that first Easter, it’s incomprehensible that 2000 years on statistics would reveal that in every context of injustice, females still suffer the most.

2020: A Pivotal Year For Women and Girls

With its mandate to be The Salvation Army’s strategic voice advocating for human dignity and social justice with the world’s poor and oppressed, The International Social Justice Commission (ISJC) has declared 2020 to be, ‘a pivotal year for the Empowerment of All Women and Girls, Everywhere’.

According to the ISJC, globally, women do three times more unpaid care-work than men. Women and girls together account for 72 percent of trafficking victims worldwide. In the least developed countries, 60 percent of girls complete primary school and just 30 percent enrol in high school.

The fact that we’re still working hard for gender equality and the empowerment of women and girls in the twenty-first century should motivate us as Salvationists—both women and men—to leverage our various platforms of influence to ensure all women, everywhere, enjoy that same liberation.

As Salvationists we are extremely well positioned to make a real difference in the lives of women and girls. And this is why Julie is so passionate about men and women discovering and using their gifts.

‘As men and women, young and old, regardless of race or culture, we have been provided with gifts and abilities to equip one another to share the Gospel. Whether we’re preaching or teaching or whatever our gifts are—we must be using them. There will be some people—men or women—who may prefer or need to hear something I say because I’m a woman, rather than Mark. So, if I don’t speak—if I don’t use my gifts—there’s a part of the body missing and someone’s missing out on the message.’

As Salvationist women and men, we belong to an incredible legacy of liberation and freedom for women.

Julie believes that God is lifting women in these days, and calls men to be allies. ‘When we’re all empowered to use our gifts, we can share the load and have a far greater impact. We’re all in this together—men and women. We’re more powerful for God together. When we’re using our gifts and our abilities and building each other up and honouring each other, calling those gifts out and encouraging each other in the mission—that’s when we’re strongest as an Army. That’s when we’re best able to make a difference in the world.’

So, let’s be faithful to the Founders’ mandate and ensure women and girls around the globe are included as participants in the mission, receivers of the message and benefactors of the freedom we enjoy as Salvationists. Let’s not waver or falter in the call Christ gave the women at the tomb and ‘Go and tell’ the good news that Jesus is risen!

The International Salvation Army is calling Salvationists around the world to prioritise prayer, specifically for justice on behalf of women and girls through the #cryforjustice prayer focus. Go to www.salvationarmy.org/isjc/2020-cry-for-justice.