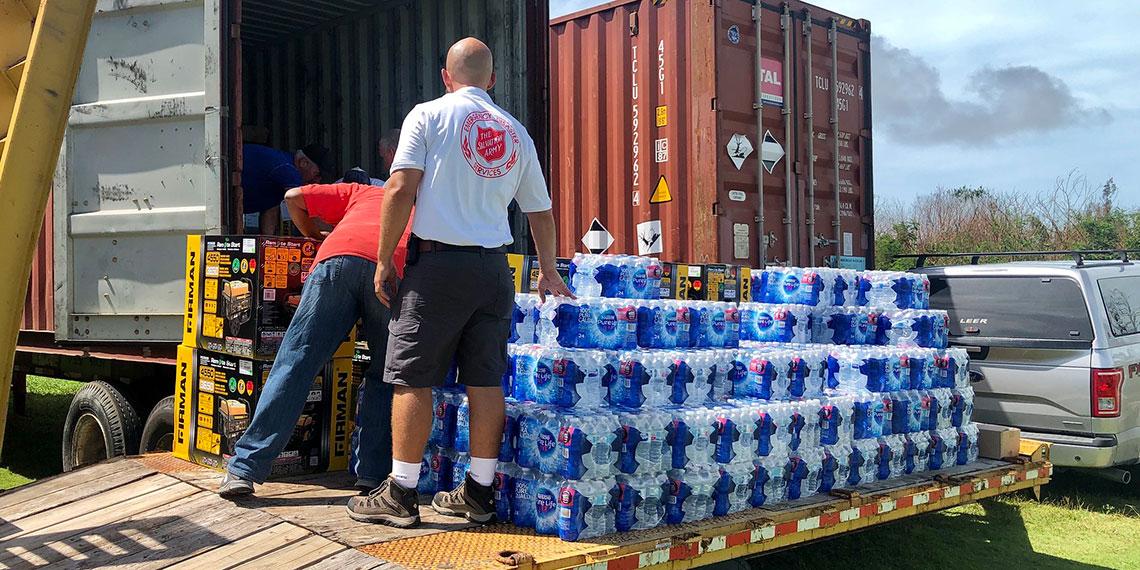 Two months after the devastating Category 5 Hurricane Dorian hit large swathes of The Bahamas, The Salvation Army’s emergency humanitarian response continues. Many evacuees have returned to their storm-damaged homes, while others are staying in government-run shelters, unofficial shelters, private residences or living rough. Relief operations have adapted to meet the changing needs on the islands, with International Emergency Services teams from The Salvation Army providing services in three main locations – Nassau, Grand Bahama and the Abaco Islands.

Overall logistics and coordination of the relief effort is being undertaken from The Salvation Army’s divisional headquarters in Nassau. While direct service to evacuees from the Abaco Islands and Grand Bahama continues, the focus here has shifted to sorting, logging and distributing the large quantity of donated items. Nearly 2,000 pallets of goods have been received, ranging from clean drinking water and grocery parcels to bleach and other cleaning products. Twenty-six pallets of tarpaulins have been assigned to Freeport, Grand Bahama, alone. In consignments heading to the Abaco Islands, plywood sheets, generators and other construction supplies have been included, representing the greater level of destruction there.

Six individuals remain in a shelter established by The Salvation Army’s Grants Town Corps (church) and coordination meetings with other relief agencies continue in order to ensure all needs are being met.

In Freeport on Grand Bahama, The Salvation Army has worked closely with government agencies, non-governmental organisations and private sector partners to coordinate longer-term recovery planning and activity. Following a mass distribution operation using the corps building as a base, teams on the ground commenced mobile food distribution in Freeport and heavily-damaged East End Grand Bahama neighbourhoods. In addition to delivering in-kind goods such as essential food items and cleaning supplies, the teams were able to conduct community assessments, provide emotional and spiritual care, and promote training opportunities.

At The Salvation Army’s Freeport Corps chapel, a child-friendly space has been created for three hours on three days each week, in conjunction with IsraAID. Mental health and psychosocial support training is being undertaken with Caritas and the International Medical Corps, and this will include delivery in American Sign Language in order to ensure maximum accessibility.

On the Abaco Islands, The Salvation Army is engaging with all emergency response coordination groups and has a place in the government administrator’s advisory group. Conditions are slowly improving, and the partnerships formed have enabled significant distributions of bottled water and clean-up kits. In anticipation of future grocery voucher distributions, the team in Marsh Harbour has partnered with other agencies to design and conduct a vulnerability assessment of Abaco and the surrounding cays.

From reports by The Salvation Army’s Caribbean Territory