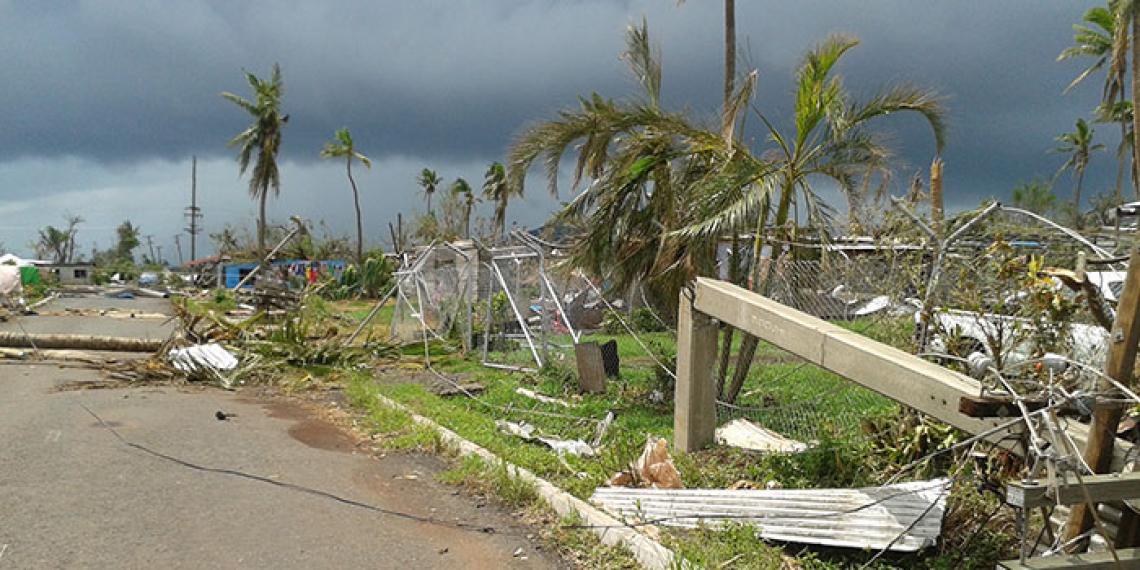 The Salvation Army in New Zealand has launched an appeal to raise funds for cyclone-related relief. All funds will be used to meet the needs of those affected by the cyclone—helping the people of Fiji rebuild their lives.

A category 5 tropical cyclone struck Fiji with full force overnight on Saturday 20 February. Cyclone Winston was the strongest cyclone to hit Fiji and the strongest ever recorded in the Southern Hemisphere. Its impact has to some extent affected up to 90 per cent of Fiji’s approximately 900,000 people. Aerial images show that some villages have been completely destroyed, with reports of serious damage and destruction of schools, clinics and two hospitals.

By 24 February, 42 people were confirmed dead, with fears this number would rise. The Fiji Government declared a month-long State of Natural Disaster. Fiji’s two largest islands, Viti Levu (where The Salvation Army’s Divisional Headquarters is based) and Venua Levu, were still largely without electricity and many areas had no water supply.

Ahead of the cyclone, The Salvation Army established 10 evacuation centres at its halls in Labasa, Ba, Nadi, Sigatoka, Suva Central, Raiwai, Lomaivuna, Nasinu, Saweni and Lautoka. The New Zealand Ministry of Foreign Affairs and Trade (MFAT) Aid Programme funds The Salvation Army in Fiji to provide immediate and ongoing emergency relief to cyclone and flood-affected people. This includes the provision of emergency containers stocked with mattresses, tarpaulins, generators, shovels, wheelbarrows, chainsaws and protective clothing. The Salvation Army also has an arrangement with major Fiji food supplier RB Patel to ensure sufficient food and water for each of its evacuation centres.

All Salvation Army officers in Fiji are trained in cyclone readiness. This includes training in emergency crowd management and grief counselling.

Due to the Government curfew, some Salvation Army centres were not required, but the Army’s Nadi centre was full, with 40 people seeking shelter at Lomaivuna, 30 at Sigatoka and Ba, 20 at Saweni and six at Nasinu. All Sunday church services were cancelled to ensure the safety of attenders, although Raiwai Corps held a service for those who had sought shelter at the corps. At Sigatoka Corps, The Salvation Army had been offering assistance to those living in a nearby squatter camp, where the oldest resident is 85 and the youngest just nine months.

Fiji Divisional Commander Major David Noakes reported that the storm was ‘vicious’. ‘Fiji is severely battered and its people extremely traumatised,’ he said. ‘The damage in villages is extensive, with a great many homes destroyed and left roofless. There is kilometre after kilometre of crop damage, with power lines down.’ Almost all Salvation Army halls and many officer quarters had been flooded, as the tremendous force of the wind pushed water into places where nothing could stop it. The Ba quarters was badly damaged by the storm and the officers there were in deep shock, said Major Noakes.

The situation for many Fijians was now desperate, said Major Noakes. Low-lying areas were severely affected by storm surges and ongoing flooding along major river valleys was likely to drive more people to seek help with food, shelter and clothing. Fijians would face challenges to food supplies and livelihoods, with agriculture, fisheries and tourism industries badly affected by the disaster.

The Salvation Army was not in contact with its corps in Savusavu (on Venua Levu) and Taveuni Island in the north east for several days as communication and access was very difficult.  Major Noakes said they would fly in as soon as possible to assess the damage in both locations. People were very traumatised and living in lean-to shacks made from material from destroyed homes.

At Rakiraki Village (between Suva and Nadi), where the cyclone first made landfall, there was almost complete devastation. ‘It can only be described as catastrophic,’ said Major Noakes. ‘The people’s response ranges from being in total shock to a determined resignation. There is a desperate need for water and The Salvation Army is sending supplies from Suva.’ The officers at Rakiraki Corps Plant were forced to evacuate their home due to flooding, but had since returned home. They were joined by families who had lost their homes in the cyclone.

The Fiji Government was encouraging people to leave the evacuation centres to return to their homes and help with clean-up efforts. However, at Nadi Corps 15 families were still living at the Army hall after their homes on the banks of the Nadi River were inundated by water. Although they were doing their part to help in the cyclone’s aftermath, it seemed likely those from the hard-hit Nadi area would need ongoing shelter and food, said Major Noakes. Lautoka Corps was also still operating as an emergency centre, with people returning to the Army hall at night to rest from repairing their homes. The officers at Nadi Corps were involved in providing post-cyclone chaplaincy services at Nadi Airport.

In Rakiraki Village, Major Noakes estimated 60 to 70 homes have been destroyed. ‘It is clear that there will be huge need for assistance in rebuilding homes,’ he said. ‘The Fiji Government seems to be emphasising damage on outlying islands, but our visits confirm urgent needs on the Western side of Viti Levu from Ba through to Rakiraki.’

The Salvation Army’s New Zealand Coordinator for Emergency Services, Major David Bennett, has travelled to Fiji to assist with coordinating the Army’s response, along with Major Nigel Luscombe and Major Mark Ennever. A working group at Divisional Headquarters in Suva has also been formed, with Lieutenant Saimone Gataurua (Divisional Public Relations Officer and Corps Officer, Suva) acting as the Army’s Government liaison. Prior to becoming an officer, Lieutenant Gatauraua had long experience working on development strategies and infrastructure within the Fiji Government.

Unitially, The Salvation Army is continuing to support people’s basic needs for food, safe water and shelter. It will also provide tarpaulins and ropes and generators. The Army is also exploring the possibility of rebuilding housing in an affected village where it is already at work. More details on this housing project will be released as plans are developed, said Major Noakes, and it would be important to do this work in collaboration with local government and tribal chiefs in the affected area.

‘Thank you to the many Salvationists who are praying for the people of Fiji,’ said Major Noakes. ‘Please continue to pray, as people’s lives will be very different for a long time to come. The Salvationists in Fiji have dedicated themselves to serving their communities, despite the impact of the cyclone on their own lives. We are told our evacuation centres had a good atmosphere about them and there is a deep appreciation of the Army’s care.’