Hard at work in Fiji 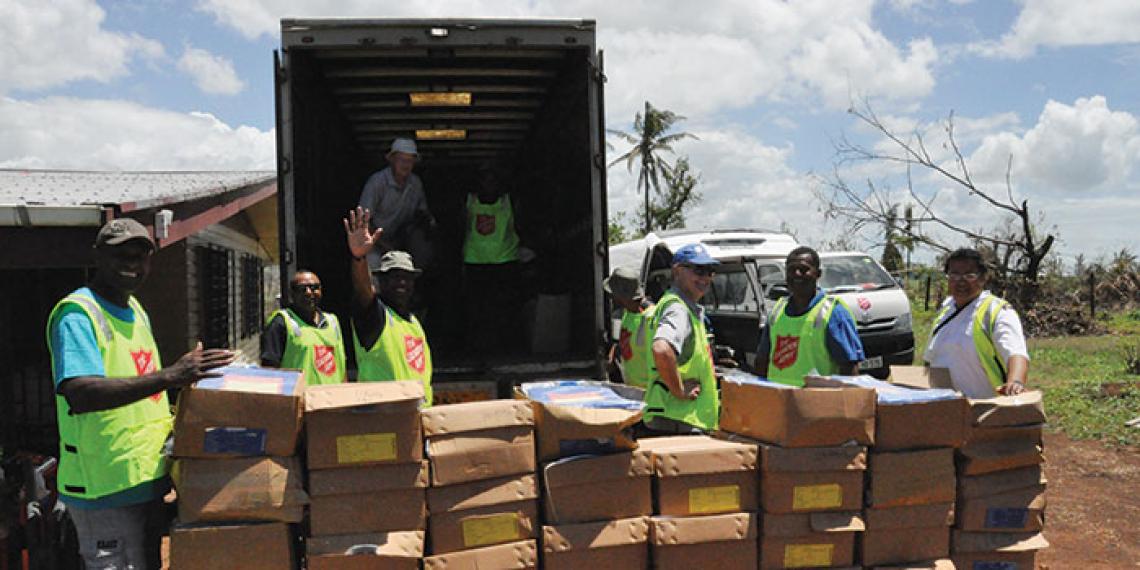 With backing from the Fiji Government, The Salvation Army is mobilised to help after Tropical Cyclone Winston devastated large parts of Fiji on 20 February. The Salvation Army has been at work in Fiji for 43 years, which aided its ability to respond. ‘Gratitude for the hard work of our people is opening doors everywhere, and our work is impacting many people’s lives,’ reports Divisional Commander Major David Noakes.

‘Salvationists are responding to the devastation of Cyclone Winston with equanimity and unshaken faith,’ he says. ‘Some have lost homes. Others have been concerned over loved ones on remote islands with which all contact was lost.' Beyond the initial emotions of shock and trauma there is a strong current of wanting to help the Army’s relief effort. Fijians are very resilient people and resourceful. The words of Habbakuk ring true of the Fijian spirit: “Though the fig tree does not bud and there are no grapes on the vines, though the olive crop fails and the fields produce no food …yet I will rejoice in the Lord.”

‘In moving forward, we want to do the very best we can for the 13 remote villages assigned to The Salvation Army’s care, Major Noakes says. ‘These are very isolated villages in the Ra Province, at least five hours’ drive from the capital city of Suva. Fiji opened its newest corps in this province—at Rakiraki—in January. We are also responding to needs that have surfaced from our cyclone emergency shelters in Savusavu and Ba, as well as in Tavua and Ovalau Island. We hope to provide enough assistance for people to rebuild their homes, plant crops and regain their independence and equilibrium.’

On the island of Taveuni, the officers’ quarters was badly damaged. Corps Officers Lieutenants Sekaia and Karalaini Rabuli said that despite the trauma their children experienced, the couple are committed to staying and carrying on with the Army’s work. They believe journeying with and serving the people in Taveuni will build strong relationships and a solid future foundation for the corps’ future ministry.

In the Ra Province, as well as providing food, water and tarpaulins, The Salvation Army is distributing clothing. A group of young Salvation Army men are also helping people clean up and repair their homes.

With many schools damaged and some destroyed, children were becoming bored, says Major Noakes. On Friday 5 March, The Salvation Army started providing psycho-social support to children, with New Zealanders Alana Le Pine (Upper Hutt) and Tracey Boon (Sydenham) travelling to Fiji to assist. ‘Disasters can really impact a child’s wellbeing, and if they don’t have the space to talk about it and reconnect positively with people and their environment, it can have long-term impacts on their development,’ Alana says. ‘Many of the children in Fiji have been through cyclones before, but never as severe as Winston, and they’ve been left feeling frightened and worried.’

Before the local school reopened, The Salvation Army ran a programme for over 100 kids. ‘There were songs and games, and the children also wrote letters to kids in New Zealand,’ says Alana. his was followed by a time of hanging out and playing that gave them time and space to chat through what they were feeling and thinking.'

A special children’s rally was also held at the school. Over 200 people attended, with each child receiving Operation Christmas Child shoebox of small gifts to enjoy. Now that school has started again, The Salvation Army is partnering with teachers to spend time with any children who are really struggling to come to terms with all that has happened.

Teams of four officers are being sent from around Fiji to support the recovery effort, says Major Noakes. To ensure sustainability and effectiveness, each team will be replaced after five days. All officers in Fiji have received training in initial trauma counselling and empathetic listening by Empower Pacific as part of the Army’s cyclone preparedness.

In Ba, most people have moved out of the Army’s evacuation centre as they begin to repair their own homes, but around 40 to 50 people were still being fed at the corps each evening. The Salvation Army is distributing tarpaulins and ropes, and supplying safe drinking water. The Salvation Army is also providing food and water in Tavua for around 100 people, using the officers’ house as its base of operations.

Local Salvationists are providing pastoral support for adults in all affected regions. There is a lot of opportunity to minister to people in prayer, as the Christian faith offers great comfort to many Fijiians.

‘We are very conscious of the prayers and concern of Kiwi and Tongan Salvationists for their Fijian counterparts,’ says Major Noakes. ‘The connections between the three nations run deep and we want to thank Salvationists in New Zealand and Toga for the myriad of ways they are supporting, empathising and reaching out to us at this time. Many parts of Fiji were not badly affected by the cyclone, but our corps at Rakiraki, Tavua, Ba, Saweni, Savusavu and Taveuni have all been in the direct path of the cyclone’s fury. These Salvationists in particular need our love, support and intercession.’

Territorial leaders Commissioners Robert and Janine Donaldson, and Colonels Barbara and Willis Howell travelled to Fiji on Tuesday 1 March to see the devastation and to encourage and thank Salvationists. Colonel Barbara Howell remained in Fiji to assist with the Army’s response.

‘Three impressions are vividly fixed in my mind: devastation, resilience, service,’ says Commissioner Robert Donaldson. ‘The devastation of flattened buildings, snapped trees and ruined possessions scattered and mile upon mile of downed power poles and lines. Amongst the devastation are the resilient people of Fiji, picking up the pieces, supporting each other and expressing gratitude for survival. And, in the midst of the devastation and the people are the Salvationists of Fiji, who despite personal loss and suffering are serving, helping, caring, supporting and expressing the love of God through word and action.’