Advocating for Change | The Salvation Army
Skip to main content 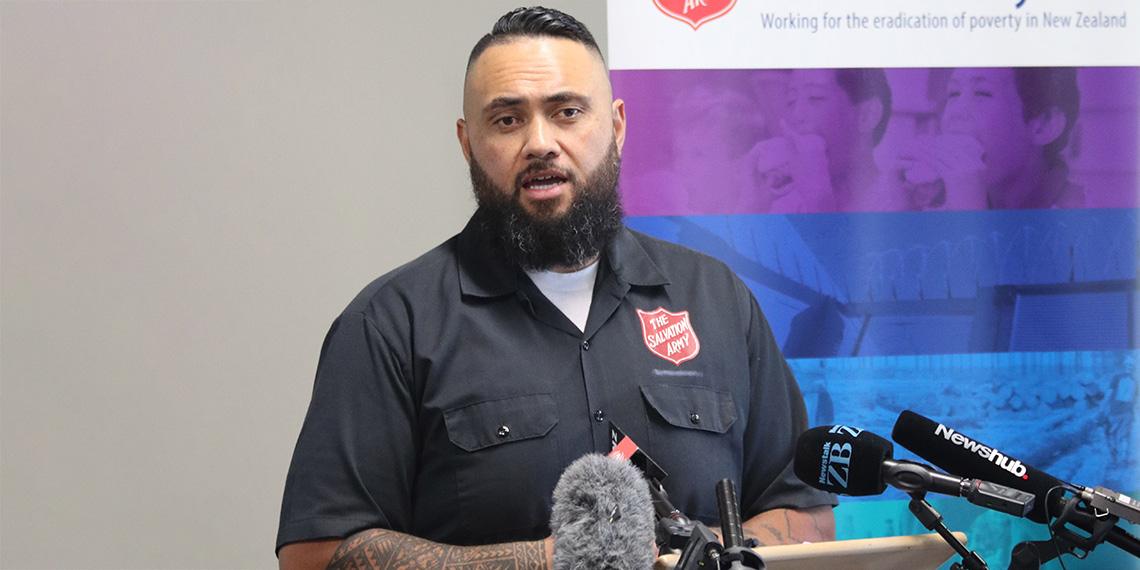 Little progress has been made in the past year to lift New Zealanders out of poverty, highlighted in the State of the Nation Report 2020. Delivered this month by The Salvation Army’s Social Policy and Parliamentary Unit (SPPU), the report included statistics under the headings: Our Children, Work and Incomes, Crime and Punishment, Social Hazards, Housing and, for the first time, indicators of inequalities between Māori and non-Māori. The report is the thirteenth of its kind and the first to be authored by three analysts: Ronji Tanielu, Vincent Wijeysingha and Paul Barber.

The report shows a mixed bag of results. Of the 24 social progress indicators used, 11 showed ‘no change’, 7 ‘progress’, and 6 had ‘declined’. What this means for New Zealanders is for many, job prospects and incomes are improving, but those living in the greatest poverty continue to struggle to provide the basics in life. These are the people The Salvation Army works with every day.

‘We’re unashamed about who we advocate for,’ says SPPU analyst Ronji Tanielu.

While each year the State of the Nation Report shows how tough it is for those living on the lowest incomes, Ronji said the results show many negatives, but were not a reason to give up hope.

‘In election year, we’ve got to be hopeful. Hope can be a powerful thing in policy. We’re doing well, but for the poorest, times are really tough. Do poorer people make bad decisions? Of course they do, but so do rich New Zealanders. The difference is the poorest don’t have the means to recover from those bad decisions.’

Launched at a series of breakfasts around the country, the report was introduced by new territorial leader, Commissioner Mark Campbell in Wellington, on February 12. He told those gathered that New Zealand is one of the few Salvation Army territories that has a policy unit.

‘As Christians, we identify with our neighbours and try to improve their lives in many significant ways—we want all people to thrive, don’t we?’

Commissioner Campbell said poverty and deprivation are not specific to NZ, and we need to improve outcomes for our fellow human beings through adherence to our partnership with God.

State of the Nation co-author Paul Barber said that while the signs of progress inspired hope, continuing challenges ‘need us to work wholeheartedly together’.

Most of the 174,000 children in deepest poverty live in households relying on welfare benefits. Core benefit rates are set so low that they are less than 30 percent of average wages. The income shortfall for basic needs for households with children relying on benefits is estimated as being from $50 to $230 per week, depending on the type of household, in the Welfare Expert Advisory Group Report 2019.

‘Inequality is not reducing. It’s the people in the lowest-income households that really need the help,’ Paul said.

Violent crime, including sexual assault, does not appear to have declined in any meaningful way.

State of the Nation has reported on the wellbeing of the children in this country for over a decade, and a consistent theme is that a significant proportion of children and young people are not experiencing the kind of life that most New Zealanders would expect to be the acceptable minimum.

Areas of concern include the many children who are at risk of harm and violence; the educational inequalities, that are not declining fast enough; Early Childhood Education participation rates, which fell slightly during the year; and, the gap in rates between low- and high-income families which has not reduced and is back to levels of half a decade ago. All of these issues greatly impact children.

Violence on the Rise

Particularly disturbing is the number of violent offences perpetrated against children. On a day when a news report came to light of a four-year-old boy from Hastings who was severely beaten, the State of the Nation Report illustrated the scale of this type of violence.

Violent crime, including sexual assault, does not appear to have declined in any meaningful way. Crime tends to be concentrated in specific regions and socio-economic groups. Māori continue to be more vulnerable to violent crime. Family violence rates, despite being measured largely by proxy, are said to remain stubbornly high, alongside high levels of breaches of protection orders.

Youth offending rates had reduced, but within that figure, violent crime rates were not reducing as quickly.

Impetus in the justice system to use alternative sentences could be partly credited with a decrease of the prison muster, following a peak in 2017. Measures such as diversion and supervision and an increase in paroles is ‘a sign of a different approach’ and could explain this.

It is estimated that current figures on crime-reporting in general—and family violence in particular—are not representative of the true scale of these problems. While victimisation levels have not reduced, apprehensions, prosecutions and case resolutions are lower.

The report also highlighted the need to address socio-economic wellbeing, because poverty and deprivation play a significant role in generating mental health issues, addictions, family dysfunction and lack of achievement in school, which are all correlated with crime.

Alarmingly, youth suicide rates are rising, particularly for males aged 15 to 19 years, and the female rate has also increased. Targeted work is needed particularly towards young males and the issues they are facing. It is pleasing to note a commitment from the Government—with significant spending on suicide prevention in the 2019 Wellbeing Budget, along with further spending on wider mental health initiatives.

The report found it was vital to engage youth in employment and training. Likewise, with an ageing population, it was important to address the needs of older Kiwi when it came to continuing to contribute to the country’s economic growth.

The Salvation Army distributed nearly 60,000 food parcels last year, with numbers continuing to reduce. This was likely due to the rise in hardship grants. Paul Barber said the statistics gave a ‘double message’.

‘While the Government’s response in granting emergency payments as a response to desperation was good, it showed benefit rates are simply not enough.’ He added that the structure of welfare needed to be changed to ‘uphold the dignity and mana of all people’.

It was also important to remember that while a decrease in food parcels was a welcome sign, other agencies who supply food parcels have reported record high demand for food assistance this year. There are also many different types of responses to food insecurity, such as food rescue and free-stores.

While people were surprised with the State of the Nation’s finding that Auckland now has a housing surplus, SPPU analyst Paul Barber said that it was imperative that social housing was built in the places of most need and affordability. He said there was also a need for rent-to-buy options for low-income earners, with the Bay of Plenty, Gisborne and Hawke’s Bay continuing to experience a notable shortage of houses for low-income earners.

Increased housing-related debt was also of concern, particularly the risk associated with these debt levels, and the report stated this must become more of a focus for national policy discussion.

Other statistics provided no surprises, sadly, and illustrated that while many New Zealanders are experiencing a lift in living standards, there is a persistent 10 percent of the poorest for whom life has got tougher.

‘Do poorer people make bad decisions? Of course they do, but so do rich New Zealanders. The difference is the poorest don’t have the means to recover from those bad decisions.’

There are improvements in educational achievement for young Māori and also a rise in employment; but this is in contrast to Māori tamariki who are four times more likely to be taken into state care.

Dr Michael Fletcher, from Victoria University, who peer reviewed the report, spoke at its Wellington launch emphasising that while methamphetamine use has risen sharply in the past year, alcohol is a drug that continues to be ‘a serious scourge’. To tackle this, the ‘powerful, vested interests of those involved needed to be challenged’, he said.

Dr Fletcher was more hard-hitting about the Government’s failure to achieve some of the goals it set in reducing child poverty and making New Zealand the best place in the world for children to grow up.

‘Should we have expected a greater change? Yes, we should have,’ he said. ‘This is a clarion call for social commitment. The Government has been slow to act in some areas. It continues, quite unjustifiably, to put further change on a three- to five-year pathway.’

SPPU Director, Lt-Col Ian Hutson, said it wasn’t only up to politicians to make change happen for those on the margins
of society.

‘We do hope that somehow this nation can come together to aid the most vulnerable. We’ve got a once in a lifetime chance to turn that around. Now that we’ve got a surplus, there’s no excuse for not going further.

‘I’m sure that reading this report will make many people keen to push for those required changes and make whatever government we have after September, more courageous.

‘We have been pushing for a raise in benefit levels, and huge investment increase in social housing, shared equity and rent-to-own, if we’re to turn this housing crisis around. The rest is up to you.’