Home / Church Community / Articles / The flourishing of all things

The flourishing of all things 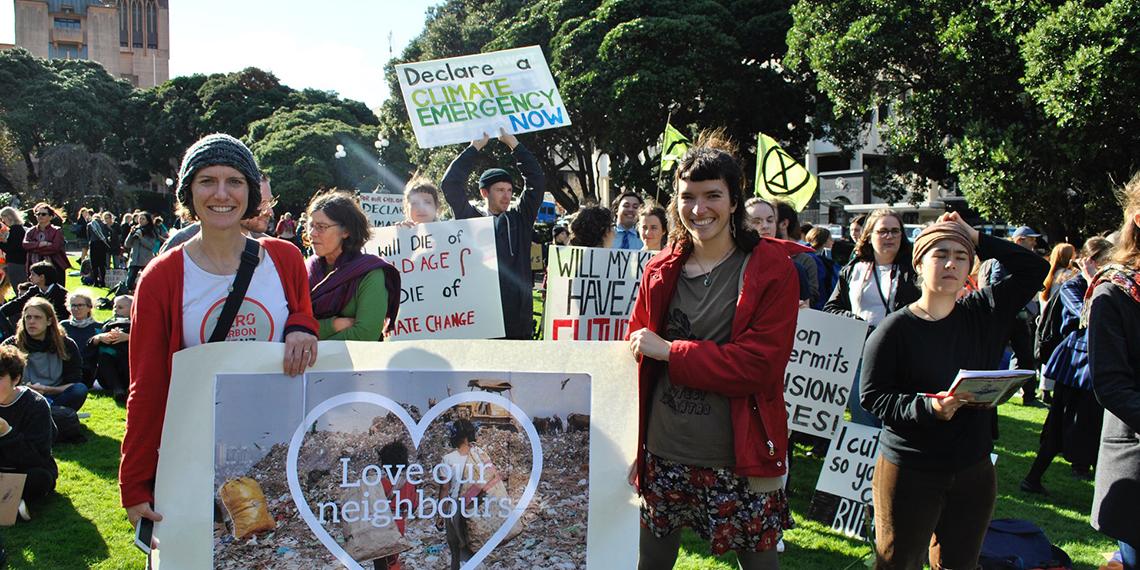 The solutions to the environmental crisis lie not only in science but in spirituality, say Christians at the forefront of the environmental movement. To celebrate 50 years of New Zealand Conservation Week, from 14–22 September, we meet Christians working for climate action.

Climate change is affecting New Zealand and the Pacific right now: rising sea levels have made some coastal properties uninsurable. The nation of Kiribati has been forced to enact ‘Migration with Dignity’ and begin evacuation of their low-lying homeland. Over 4000 animal species are at risk, according to Department of Conservation. Extreme weather has contributed to events like the Nelson fires last summer.

Despite the overwhelming evidence, some Christians continue to deny climate change. But to focus on the stats is to miss the point, says Murray Sheard of A Rocha Aotearoa, a Christian conservation organisation.

Murray spoke these words at a conference commemorating 50 years since historian Lynn White Jnr wrote an infamous paper placing the blame for the environmental crisis squarely at the feet of Christianity. White argued that the Christian worldview, in which humans have dominion over the earth, has led us to see nature as an instrument for our purposes.

Since his paper, it’s become a popular cliché to blame Christianity for our ecological crisis. To put it bluntly: ‘You want to know why the sky is falling? If you want to know why the seas are rising, look no further than the religion whose God came from heaven to earth in human form, and then turned around and went back to heaven leaving the earth behind. In short, shame on us. We Christians are to blame for this mess,’ explains Dr Derek Woodard-Lehman, professor of Public Theology at the University of Otago.

But, if the problem is one of the human heart—if the problem is essentially spiritual—then perhaps the answer is also spiritual. ‘If these questions really are moral and spiritual, there must be a role for the church. The environmental movement deeply, I believe, needs the church,’ sums up Murray.

There is a flourishing movement of Christians who see creation care as a deeply personal act of worship.

Cadet Char Whybrow says that a true understanding of the creation story in Genesis teaches us that caring for the earth is a privilege. ‘We should take care of the earth because God made it and said, “It is good”. Having dominion over the earth means being good stewards, looking after and taking responsibility over what God has given us. When we care for the earth we show respect for the one who created it all.’

Corps Officer Lieutenant Heather Pyper has given up meat and recently completed ‘Plastic Free July’. ‘I looked into scripture and rediscovered God’s great love for all creation. I decided to give up the “Big Four”—single-use plastic bags, water bottles, disposable coffee cups and straws—and that began an ongoing passion for creation care.’

But she admits it came at a personal cost: ‘It led to some really deep, personal conflict. I went on to consider how as humans in the West, we are so focused on easy, fast-paced living. We are very wasteful, high consumers. I had to acknowledge to myself that I am hugely guilty of that and felt overwhelmed by the enormity of it all.’

This is the lament of our generation, agrees Elise Ranck, who works in climate action for the Anglican Diocese of Wellington. ‘Deciding to learn about environmental issues has been an ongoing process of lament, asking God, “Why have we tried to recreate your world in a way that is causing death, and shows no evidence of your love?”

‘It’s a process of asking for forgiveness and asking God to help us to do small and simple things that express to our neighbours, and express to each other, that we do care about God’s earth and we care about the flourishing of all things.’

The Anglican Church in Aotearoa is one of the leaders in the local church on environmental issues. Several years ago, it joined the worldwide movement to pull money from any investments that could be linked to fossil fuels.

Wellington Bishop Justin Duckworth called on the diocese (region) to plant trees in response to climate change—one church took up the call and planted 5000 trees on local wasteland.
Kate Day is employed by the Anglican church in Wellington as a climate action advocate. Along with Elise, they head up ‘a network of Christians who are passionate about climate care’.

They grasped the power of using the Christian voice, and for the last two years their focus has been on supporting the campaign for a Zero Carbon Act—a new law to put New Zealand on a path to net zero carbon emissions by 2050. This idea was developed by a group of climate-conscious young people called Generation Zero: ‘We came alongside them as allies to amplify what they were doing,’ explains Kate.

‘New Zealand desperately needs a plan and targets to get to net zero carbon. It’s about keeping our country in line with the commitments we have already made in the Paris Agreement [an accord signed by 195 countries committing to reduce emissions], to do our bit to keep the temperature rise within 1.5 degrees.

‘All global efforts are trying to keep global warming to no more than two degrees from pre-industrial levels and preferably to only 1.5 degrees. Temperatures have already risen one degree—we don’t have a lot of time to play with,’ explains Kate.

On one memorable Sunday, around 70 young people descended on churches in the region to talk about why the Zero Carbon Act is important: ‘They talked about why they personally cared, and then they invited people to write a submission (to government). And through that, we got 560-plus submissions from Anglicans.’

They jokingly dubbed the day ‘mission for submissions to reduce emissions in line with the great commission’.

The day ended with celebratory pizza (yes, you can be climate conscious and still eat pizza!). ‘So many people were on fire. All of them were smiling and there was such a sense of hope,’ recalls Elise.

The team was also watching from the gallery in Parliament when the Carbon Zero Act was debated in parliament. ‘It was awesome. Half of the gallery was full of young people. Prime Minister Jacinda Ardern acknowledged in her speech the hard work by Generation Zero. Then she went out of the chamber and a few minutes later appeared in the gallery to congratulate them,’ says Kate.

‘That was really beautiful. Jacinda spoke with a lot of power and a lot of confidence,’ adds Elise.

Kate sums up the current progress of the Zero Carbon bill: ‘Right now it’s “watch this space”. The hope is that there will be consensus across the political spectrum. So that the question will be not whether we’re reducing emissions, but how?’

It’s a big question that will require some seismic shifts in Kiwi culture. Kate says with agriculture producing nearly half New Zealand’s emissions, changes are already being made to farming practices.

‘Some farmers are making really amazing efforts to reduce pollution using technical solutions—there are different ways they can feed their livestock, for instance, to reduce emissions. These efforts need to be applauded,’ says Kate.

Farmers do care deeply about their environment and livestock, agrees Dr Ken Oliver, a Waikato dairy farmer with a PhD in Chemistry. But he warns that consumers (us), as well as producers (farmers), need to take responsibility for sustainability: ‘All food carries an environmental cost. Regardless of what type of food is being transported from the country to the city, the real problem lies with consumers who are not producers.

‘As producers we are required to carefully manage our fertilizer inputs and relatively small amount of effluent. We return effluent to the land in a controlled manner, as a resource, not waste. But what of the nutrient rich effluent produced in the cities by those who eat our produce?’

The Taranaki region, which is heavily reliant on New Zealand’s oil extraction industry, is similarly examining how its industry and economy can thrive in a healthier, post-fossil fuel world.

But for Christians who care about the environment, living more sustainably is also deeply personal, embracing a new type of holiness.

‘It’s the shift from self-centredness to the radical love of Jesus, which was self-sacrificing,’ reflects Kate. ‘That plays out in every sphere, but with regards to environment issues it’s moving from, “What is best for me right now in the moment?” to actually, “How will this impact people in other countries?”

‘If we devastate any area of the world, that has a consequence on people—and that doesn’t line up with Jesus saying, “Love your neighbour as yourself”. We can’t talk about creation care with authenticity unless, in our orientation and our life, we are trying to do our best to live right with God.’

It’s a confronting truth, agrees Heather. ‘Yes, it’s inconvenient. I have four children, believe me it is really inconvenient. But if I really believe that creation care is essential, I need to stop making excuses.’

But one simple mantra is a guiding light for these Christians: ‘Our mantra is “grace not guilt”,’ says Elise. ‘When we try to live sustainably in that mindset, it’s actually really healthy. But when it becomes a set of rules it becomes about yourself and, “Look at this amazing thing that I’m doing”.

‘Yes, you think, “What can I possibly do to make a difference?” And sometimes it feels futile to make personal changes, but for me, it has transformed my heart as well. It is inward and shapes my thinking and my prayers, and has caused me to have a more thoughtful life.’

What can I do?