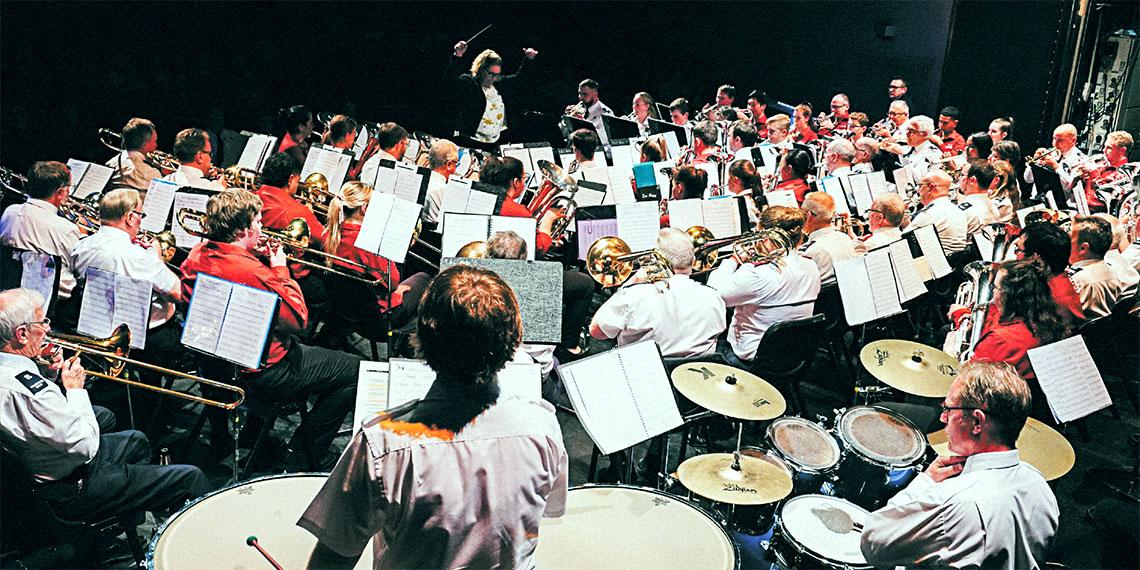 The Inspire Brass Band Festival—founded in 2017 by Captain Marcus Collings and the Hamilton City Salvation Army—took place over the weekend of 21-22 September at Clarence St Theatre in Hamilton.

The biannual festival weekend has a twofold purpose. It is designed to bring together Salvation Army musicians—particularly our brass bands—in a way that offers encouragement to all involved. At the same time, Salvationist bandspeople share their talents for local mission and ministry.

The festival aims to uplift and inspire the Waikato community, through a combined brass bands concert on the Saturday night, followed by a Sunday morning worship meeting.

Close to 400 people came together for Saturday night’s event, which started with a very enthusiastic Hamilton City Junior Band playing in the foyer, as concert-goers arrived.

Compèred by Captain Marcus Collings, the programme commenced with Hamilton City playing ‘A mighty Fortress’ and ‘All that I am’, which included a Euphonium duet by Sarah Carroll and Kim Bracegirdle. Palmerston North Corps band played ‘Shine on Us’, ‘Rest’ and ‘The Break of Day’. The Youth Band then took the stage to perform ‘There will be Light’, ‘Manchester’ and ‘For the World’.

The concert programme built through the night to a spectacular second half, when all three bands joined together as one. The massed band pieces—led by guest conductors Delwyn Ringle and Gordon Jellyman—included ‘the Superman Theme’, ‘Guardian of my Soul’, ‘Hymn to the Fallen (Saving Private Ryan theme)’, ‘Largo’ and ‘the 1996 Olympic Fanfare.’ What an amazing sound with over 80 musicians playing together to the glory of God!

Guest vocalists, Lauren and Aaron, brought the house down with their opening contribution, ‘The Prayer’, and the inspiration continued with ‘We shall behold Him’, ‘They Could Not’ and ‘More than Wonderful’.

The evening concluded with a rousing rendition of ‘The Founder’s Song’ with the massed band, music team vocalists, Lauren and Aaron and a congregation who were in full voice. What a majestic sound, and, we’ve been told, a deeply impacting moment for a number of concert-goers who had never heard this anthem before!

Over 420 gathered on Sunday morning—which started early for the musicians, with a devotional and time of prayer led by Marcus. The meeting continued with the massed band leading the service through, along with outstanding solos and duets from Lauren and Aaron.

A wonderful, heartfelt personal testimony was shared by Landon Smith and a passionate, Spirit-filled message was given by Captain Paul Gardner, Divisional Commander.

What a special weekend of community and connection through music, song, testimony and teaching—it will be talked about and inspire for a long time.