An Offering for such a time as this 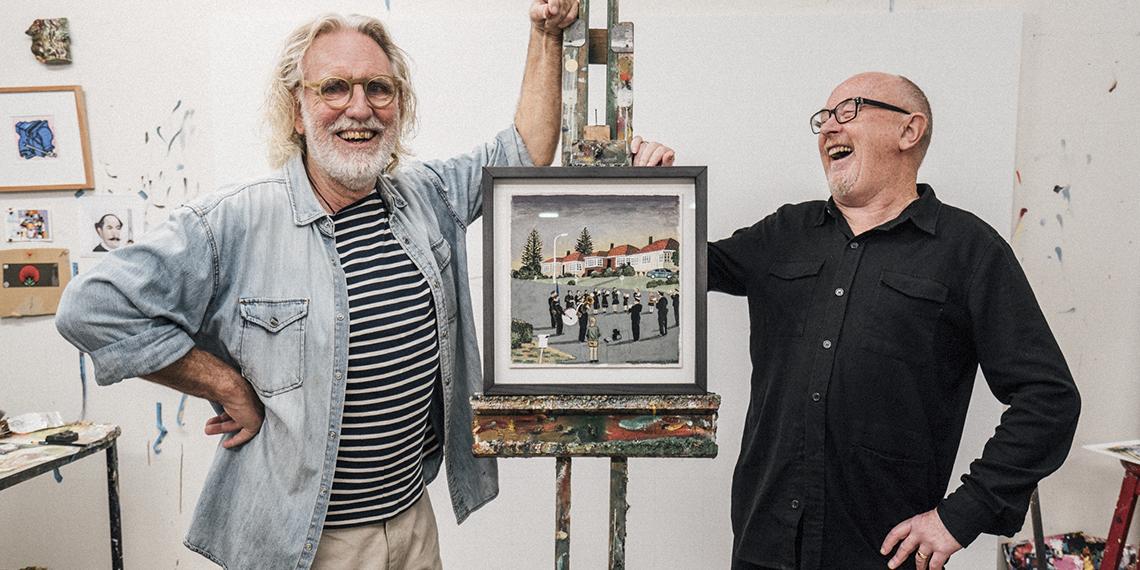 If you have wept at memorial services around the country, or watched the news in shocked silence, you may have been comforted by the powerful presence of the hymn ‘Whakaaria Mai’, sung by well-known Kiwi artists Teeks and Hollie Smith.

This was the first single released as part of Offering, an album featuring 15 well-loved New Zealand recording artists, who breathe new life into ancient hymns—including household names like Stan Walker, Dave Dobbyn and Sol3 Mio. Each hymn has also been interpreted by a prominent New Zealand visual artist.

‘Whakaaria Mai’ (‘How Great Thou Art’) was released last week, to provide an instrument of both lamentation and comfort during our darkest days.

‘What we found when we read the lyrics of every hymn in the Offering, was they were written at a time of great adversity by the writer,’ says project creator and head of Thom Productions, Murray Thom.
He points to the much-loved hymn ‘It Is Well With My Soul,’ written by Horatio Spafford in 1873, after his four daughters died at sea. ‘We, as humans, can draw on those depths. If the writer in great despair can say, “It Is Well With My Soul” then we can draw on that and be comforted by that,’ reflects Murray.

The album has abiding significance for the Army—not only is our musical heritage at the heart of the vision, but all proceeds from both the album and paintings will go directly to fund The Salvation Army and our work with those most in need. It is an unprecedented gift to the Army, says Territorial Commander Commissioner Andy Westrupp.

‘This is such an incredible gift for the Army, and we feel so privileged that Murray and Tim [Harper] have chosen to collaborate with us. We pray that much good will come from it—both as people seek comfort during these times, and for the many New Zealanders who will be helped through the proceeds,’ says Andy.

Songs of the Spirit

It is poignant that every artist on the album chose their own hymn, paving the way for very personal—and often spiritual—journeys.

The first single, ‘Whakaaria Mai’, was chosen by Teeks as a tribute to his grandfather, who was an archdeacon in the Anglican church, and who Teeks describes as his ‘greatest role model’.

Ginny Blackmore chose ‘His Eye is on the Sparrow’, which she sang at her grandmother’s funeral.  ‘It was a song that changed my life when I first heard it. When I am in glory in Heaven I will be singing it again,’ says Ginny.

Kimbra took her inspiration from the passing of Aretha Franklin, who recorded ‘Precious Lord Take my Hand’—Martin Luther King’s favourite song, which was synonymous with the civil rights movement.

One of New Zealand’s best known visual artists, Raymond Ching, has a special connection with The Salvation Army. Although retired from the public eye, he created a painting to honour his Salvationist mother. ‘Her father was an alcoholic and his behaviour was so outrageous that it drove my mother away. She left home at 15 and joined The Salvation Army. That started her lifelong association with the Army,’ recalls Ray.

‘Some of these artists who wouldn’t call themselves “religious” have really opened their arms to this,’ reflects Murray. ‘They have brought tears to my eyes. At the end of the day, everybody’s soul needs watering and when somebody turns the tap on, you want to go and stand under it.

‘God keeps showing that he’s quite a bit bigger than we can ever comprehend and that God is for everyone.’

Offering co-creator Tim Harper, was also struck by how profound the experience was for many of the artists, whose first reaction was ‘I am not worthy’.

‘Once we gave them permission and said, “No, you are worthy”, that became the overarching message. Our artists have felt included and worthy as opposed to unworthy; they’ve felt loved as opposed to unloved, accepted as opposed to rejected. It’s a profound experience, and it has been life-changing for some,’ says Tim.

Then he adds what is both a compliment and challenge: ‘The Salvation Army certainly treats everyone as worthy,’  he says.

The seed of the Offering project has been watered and nurtured for 17 years, and also proved to be deeply spiritual for both Murray and Tim.

‘I was journalling, and this word “offering” came to me,’ explains Murray. ‘I started to think about the hymns that had sustained the weary for centuries, and I thought “Wouldn’t it be amazing to have the artists of our time perform the songs of all time?” That was the genesis of the idea.’

The next day, a divine appointment brought Tim into the picture. ‘I was 23, about to begin a Masters in Nutrition, and just back from London and happened to go to Murray’s house. He shared his vision with me, and God showed me the vision so clearly—to the point that I changed my career, followed that quiet voice, and held on to it,’ explains Tim.

From the very beginning, Murray’s vision was that all funds from the project go back into helping the community. ‘I feel very, very privileged that God gave me a vision and entrusted me with that,’ he says.

Then, 10 years ago, Thom Productions shot to prominence as the creators of The Great New Zealand Songbook—an album of our country’s greatest hits from the last century and new millennium. Since then, Murray and Tim have been behind The Great New Zealand Cookbook, and a raft of other projects around the world.

The relationships with Kiwi artists developed through the Songbook, became a key that unlocked the Offering project. But they laugh that the reason it has taken 17 years for the vision to come to fruition is ‘it took us 14-and-a-half-years to realise The Salvation Army were the people we were meant to partner with’.

An act of kindness

‘I always wanted to make this album, and I always wanted proceeds to go and help people, but I didn’t have a clue how that might be,’ explains Murray.

All that changed one day during a conversation with his sister Wendy Nixon, who recalled how The Salvation Army nourished their souls during a time of great need. Her husband, Grant, was General Manager of a Christian marketing company called CMC, and worked with two young Salvationists, Bryant and Aiden Richards.

Grant had to have a fairly routine hernia operation, but things went horribly wrong leading to weeks of complications, with doctors unable to explain what had gone wrong. ‘I was facing an uncertain Christmas for my young family and very sick husband,’ recalls Wendy.

‘A couple of nights before Christmas we heard loud music outside. Out we went to investigate and were stunned to find Bryant and his Salvation Army youth group on our front lawn. They had come all the way across Auckland to bring Christmas to us. In classic Salvation Army brass band style, they proceeded to play a series of wonderful Christmas carols for us. It was a gift from heaven when we needed it the most, and assured us that our Heavenly Father knew our little family was hurting,’ says Wendy.

‘Even now, many years later, it brings tears to my eyes to think about it. It is one of my life’s highlights, at a time that was definitely a low.’

As Wendy shared her story, ‘it was like the scales fell from my eyes’ recalls Murray. They realised The Salvation Army was the perfect partners for this project—both for our musical heritage, and as partners in putting funds back into our community, where it is most needed.

In one of the first collaborations for the Offering, almost two years ago, Dave Dobbyn lent his vocals to ‘Amazing Grace’, with a haunting and plaintive accompaniment from the Army’s Wellington Citadel Band.

Creative Ministries Director Jim Downey conducted the band for the occasion. ‘Dave talked to the band about how emotional it was for him to sing this song. It was clear in meeting Dave that he is a really passionate man and Christian, who has a real heart for the people of New Zealand,’ recalls Jim.

Much-loved artist Dick Frizzell then painted a scene that reflected Wendy’s story—with an Army band playing outside what could be any New Zealand street. It became the album cover, which will be available from 26 April.

This also sparked another idea: ask prominent New Zealand artists to interpret each of the hymns as a painting. These original works, along with 12 limited edition prints of each painting, will be available to purchase from 1 May. Again, all proceeds from these prestigious New Zealand works will go to The Salvation Army.

Every single recording and visual artist who participated in the project did so completely free of charge, and have foregone any future loyalties.

An offering for all people

At its heart, the project is still about that single God-given word, 17 years ago: an offering.

‘It’s such an old-fashioned word, and it’s not a word that I would use,’ reflects Murray. ‘But I love the breadth of the word. When we think of an offering we think of the plate going around on Sunday morning. But I think the concept of offering is much more connected to people’s gifts and what they can offer. So many people have offered themselves to this project.

‘It’s our great delight to be making this for the country we live in and we love. The Offering project is our gift, if you will, to New Zealand. And it’s certainly the artists’ gift to New Zealand, as they have freely given their God-given talents.’

This ‘community of offering’ extends to all New Zealanders who buy the album—not only do the proceeds go to the Army, but every album comes with two CDS: one to keep, and one to give away.

Offering will be released almost 10 years to the day since The Great New Zealand Songbook. For its creators, it is a ‘full circle’ moment—at a moment in time when our nation most needs it.

‘These are songs you listen to when you want some quiet time, at a celebration like a wedding, or in mourning—like a funeral,’ sums up Tim. ‘God’s timing in this has added new depths to the offering.’

It is an offering we can all take part in, for such a time as this.

The album Offering will be launched on 30 April, live on Seven Sharp.

When you purchase an album, you receive one free to give away.  You can purchase art and limited edition prints from 1 May, by going to www.offering.org

All proceeds go to The Salvation Army!