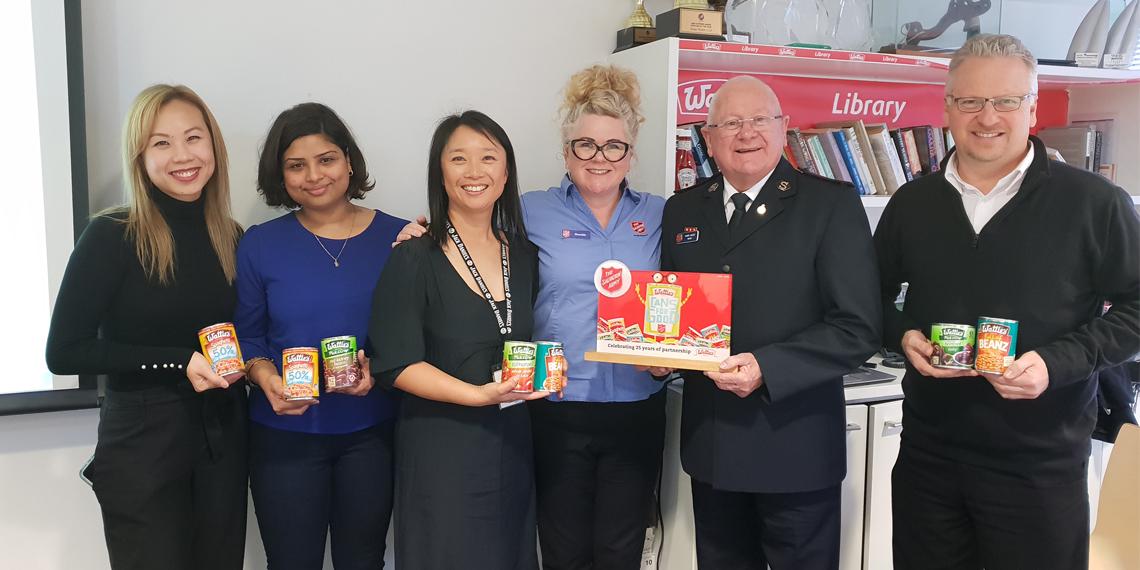 Last year The Salvation Army and Wattie’s celebrated 25 years of partnership. At its conception, no-one would have imagined how successful and longstanding the relationship would become.

Ruth Richardson’s 1991 ‘Mother of All Budgets’ instantly changed the face of New Zealand society, and led directly to The Salvation Army opening its first foodbank, in South Auckland.

Under Jim Bolger’s National Government, Richardson worked closely with Minister of Social Welfare Jenny Shipley on the Budget, which cut the unemployment benefit by $14.00 a week, the sickness benefit by $27.04, families benefits by $25 (to $27), and abolished universal payments for family benefits.

The Salvation Army saw an immediate response to the cuts: people were suddenly needing help to meet their basic needs.

Auckland’s North Shore was one place that suddenly experienced huge demand for help feeding their families. Major Terry Heese was shocked at the level of need, even in an area many considered a ‘posh’ part of Auckland.

‘We never really had any great need on the North Shore. That changed immediately.

‘The Budget totally affected all beneficiaries,’ Terry says.  ‘Prior to that, we didn’t need a food store, there were just a handful of people in need.’

A foodbank was desperately needed, but there were budget concerns.

‘We started the community ministry, but we needed money.’

The Wairau Park retail complex was being built at the time and included a theatre complex. Peter Wyatt from Auckland Congress Hall knew the theatre manager, and, along with Terry, approached him to ask if he would be willing to give people tickets to a movie in exchange for the donation of a can for the foodbank.

So the ‘Cans Film Festival’ began.

Wattie’s immediately got behind the project, donating up to 25,000 cans—it continues to do this each year. In total, 1,484,000 cans have been donated through the duration of the partnership.

‘I guess I was a bit surprised with the generosity of Wattie’s, but then I’ve always been surprised by people’s generosity.’

In 2016, the Cans Film Festival changed to Cans for Good, which saw schools take on the challenge of donating to the foodbanks. ‘We always have to adapt and change. We had done the movie thing for enough years,’ Terry says.

The Salvation Army’s partnership with Wattie’s has endured.  ‘It has turned out to be an amazing link for the Army that has continued.

‘The Cans Film Festival was a great initiative but, because we could only get as many cans as there were theatre seats, we needed to find a way of getting more donations,’ Rhondda Middleton, former Salvation Army Public Relations Community Engagement Manager—and Terry’s daughter—says.

‘I had just joined the PR team. We needed to make sure cans were going into supporting people needing food, but also connecting with a new generation and showing them how they could be generous. That’s why we developed a new appeal focussed on schools.’

Schools got right behind the project, and students donated 67,212 cans.

‘It’s so cool to partner with Wattie’s to tell the story about how simple it is to help others,’ Rhondda says.

The project has gone from strength to strength, with many schools adding events like mufti days to bolster donations to the food banks. Last year, 250 schools took part, and the team are hoping to get more on board in 2019.

There’s also a competition to see which school can make the most impressive creation out of cans. ‘We’ve seen some incredible designs over the years,’ Rhondda says.

Rhondda says the demand for food continues to grow, and while fresh produce is great to have, cans of food will always form a staple of the food parcels that go out to people.

‘As we know as parents, there’s always something delicious you can make with a can of sweet corn, some relish and bread,’ she says. Cans are also easy to stack and store at the foodbanks.

Although Rhondda is now overseeing Community Ministries in Northern Division, she says the legacy her father Terry helped create, endures. Last year, Terry joined her at the 25th celebrations of The Salvation Army’s partnership with Wattie’s.

‘My parents instilled in me caring for people, and that we all can make changes—it’s our kaupapa.’

by Louise Parry (c) War Cry magazine, 10 August 2019 p14-15. You can read War Cry at your nearest Salvation Army church or centre, or subscribe through Salvationist Resources. It is also available online.