Working it- Stay at home dads 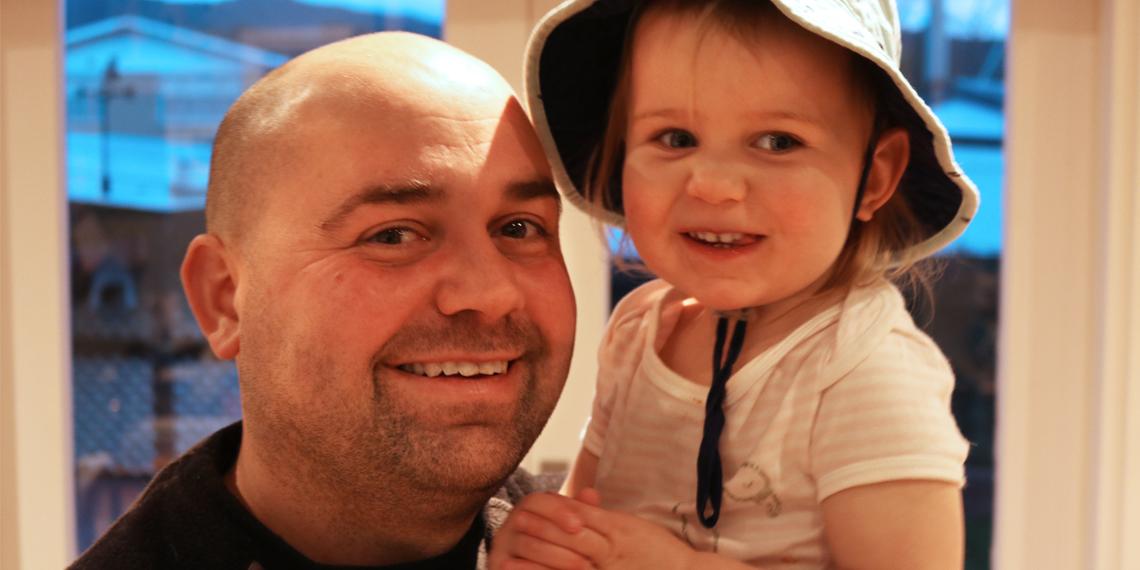 When Clarke Gayford debuted his ‘dad cardie’, New Zealanders knew he was serious about his role as ‘the ultimate in 21st Century parenting’. This Father’s Day, we celebrate a new generation of stay-at-home dads.

When Prime Minister Jacinda Ardern and partner Clarke Gayford made their first public appearance, introducing newborn Neve Te Aroha, Clarke could be seen modelling a very special piece of clothing. It was no ordinary jersey: it was a Dad Cardie—which Jacinda described as a ‘real find’, from The Salvation Army’s Family Store in Gisborne.

‘Clarke’s got his dad cardie on, which means he’s ready to go,’ she said. Clarke nodded solemnly: ‘Finally it’s come of age.’

When Neve was welcomed into the world, there was widespread elation that not only would Jacinda continue as Prime Minister after six weeks at home, but Clarke would be stepping into his role as primary carer. It was a glowing sign of the times—with an inspiring message that anyone can challenge gender stereotypes.

Many would say this kind of parenting is hardly surprising in 2018. Surely distinct gender roles are a thing of the past? Urban Dictionary has even defined stay-at-home dads as ‘the ultimate in 21st Century parenting’.

However, in New Zealand, only three per cent of men listed their occupation as the ‘primary carer’ for their children, compared to 19.3 per cent of women, according to the 2017 Household Labour Force Survey.

Jacinda said she hoped her decision would become normalised and not remain a novelty: ‘[I hope] it’s generally accepted, not just that women can make choices, but that men can too. Clarke’s been as much of a role model here as I am,’ she told a press conference at Auckland hospital.

For his part, Clarke says he feels embarrassed about the attention he’s received: ‘It was pretty obvious that that was what I was going to have to do, and I don’t feel particularly special about doing that, because I do know that there’s lots of dads out there that have been doing this for years and years,’ he told Radio New Zealand.

‘So, to have attention around that being “something special” that I was going to do, doesn’t really sit that comfortably with me. But it’s been nice when the dads have come up and they’ve been really excited to tell you about how it goes, and what you have to look forward to.’

Stay-at-home dad, Rob Foley, has been on the job with baby Amberlie nearly a year. He says wife Emma was always the breadwinner so, economically, it was an easy choice.

But Rob is honest in saying he initially felt a bit insecure about his new found ‘career’. This largely came down to feeling like he wasn’t making a financial contribution for his young Totara Park family.

He recalls going to the supermarket and feeling like he didn’t have any buying power to get things for himself. ‘I had to ask permission from my wife, because I didn’t make that financial contribution … that was what got to me in my head,’ Rob admits.

As it began ‘niggling away’ at him, he raised the concern with wife Emma. ‘She said, “You are making a contribution but in a different way’’.’ Rob adds: ‘If I weren’t doing what I’m doing now, Emma wouldn’t be able to do what she is doing, which enables us to keep a roof over our head.  ‘You’ve got to try and be more open about your contribution.’

Rob admits that he’s felt emasculated as a stay-at-home father, especially when he first started going for walks with Amberlie in a front pack. ‘But I’ve seen other dads around here [wearing one] … it’s becoming the norm, you could say, or widely accepted. But I had never seen that growing up.

‘It’s a silly thing to look back on it now because I’d gladly put one on now.’

But with Amberlie nearly two years old, Rob says any trace of insecurity has gone and he wouldn’t have things any other way—even when Amberlie is throwing toys on the floor. The former bus driver doesn’t feel any need to hold back on the tough realities of parenting—he’s well accustomed to the rarity of a ‘good’ night’s sleep.

‘There are times it gets annoying where you feel as a dad or parent that you’re banging your head against a brick wall.’ His main piece of advice for new parents would be to ‘choose your battles wisely’.

Emma adds that while their parenting choices were easy given she’s the breadwinner, she’s come to realise their circumstances play other vital roles in raising their daughter. ‘I think it’s important to me that she [Amberlie] does have a strong female role model in her life that does more than just the homely stuff … that she sees that I have a career I value, that’s helped to provide all the things in her life, and that she sees it’s not just a male responsibility.

‘If peripherally we make an impact, either in our daughter’s life or in other woman leaders coming up the ranks in my workplace, then I think that by-product can only be a good thing,’ adds Emma. ‘I haven’t deliberately set out to break down barriers or buck trends … it just ended up being the right thing for our family.’

Aaron Stone is a father of two, and a stay-at-home dad. He says being a bit of an introvert has helped in his role as primary carer. ‘I enjoy just sitting down watching TV or playing video games … so I didn’t feel my masculinity was in trouble or going to be challenged purely because I was a stay-at-home dad.’

Although, he adds, it’s not all footy and flat whites, ironing and cooking are all part of the routine, with the tasks seemingly endless. ‘I try and make sure everyone is in a happy state by the time my wife gets home.’ Father to Regan aged 8, and Anastasia aged 11, Aaron says he was never career-minded in the way his wife Heather was. ‘Before we were even married, it was pretty much a given that I’d be the stay-at-home dad.

‘I don’t think in this day and age that it’s outside the box for the man to be at home anymore, with women advancing up the career ladders just like anybody else.’

While Aaron says he hasn’t had too many negative responses about his unorthodox role, he admits he feels he can be put on a bit of an unnecessary pedestal.

‘They [Heather’s friends] say, “Oh your husband must be great”, but their husbands are at work doing their thing. We are just the other way round. Just because I cook and clean … it doesn’t mean I’m anything different or special by any means. I’m just doing a role.’

Aaron’s wife Heather, national accounting manager for The Salvation Army, says that the overall response to how they do things has been positive—a number of older men have even said they would have loved to have been stay-at-home dads.

Yet, not everyone seems to get their head around the fact that this is the ideal way of doing things for the Stone family. ‘We’ve had comments like, “Oh well, I guess if you can’t stay at home then that’s the next best thing’’. Whereas, for us, Aaron staying at home is the best thing, because he’s much better at being at home than I am.’

Heather is comfortable with the fact she couldn’t have been at home full time, saying it was never her kind of personality. ‘I’m super grateful for Aaron and everything he does. I couldn’t do what I do without him doing what he does … It’s really cool that this has worked for us.’

Clarke and Jacinda’s traditional role reversal has produced no shortage of dialogue in the media about the changing shape of gender roles. In her first interview back on the job, Jacinda had to remind New Zealanders that Clarke is just as much a parent, and not ‘just the babysitter’.

But, overwhelmingly, the conversation has been positive. Former Prime Minister Helen Clark, was particularly thrilled about the first couples’ unorthodox approach to parenting: ‘Here we are in the 21st Century and we have a trailblazing young female prime minister who’s saying, “Well, I can do this, I can be PM, I can be a mum, I’ve got a partner who’s showing through his actions he’s committed to gender equality, he’s going to do his bit looking after the child”,’ she told Radio Live.

Massey University Associate professor, Grant Duncan, made similar remarks on Radio New Zealand: ‘This is an opportunity for us to reflect as a nation on men as carers ... men can be primary carers.

‘And actually ... it’s a really good thing ... we should give him the thumbs up for taking on that role.’ Grant added that he was once a stay-at-home dad himself, describing it as an ‘enriching experience’.

Stay-at-home dads remain the large minority—Statistics New Zealand says only one percent of parents receiving government paid parental leave are male. There’s very little data about how many Kiwi dads are officially staying at home —and Statistics NZ doesn’t even have an official definition for what that entails.

But Senior Family Coach at Parenting Place, Jenny Hale, says there is definitely a trend towards more dads taking on the role of primary carer. ‘As families grapple with financial challenges, it often makes sense for the highest earning parent to be out in the paid work force, and the other parent to be at home,’ she says. ‘Sometimes having dad at home and mum at work is simply the preferred choice, and families are finding some real benefits of changing the trend.’

According to research from University of Otago law professor and child law expert, Mark Henaghan, male primary caregivers can be beneficial for both children and the couple’s relationship, as well as being economically beneficial for society as a whole.

Jenny adds: ‘There was a time when people were shocked that a family would swap roles, but attitudes are changing and it’s not uncommon for dads to be confidently taking on the wonderful, but challenging (and, at times, lonely) role of being the stay-at-home parent.

‘I personally love the fact that children get to build a strong relationship with both parents, and that parents get to see and value each other’s roles within the family. There is enormous benefit in “walking in the other parent’s shoes” and understanding the highs and lows of each role.’ 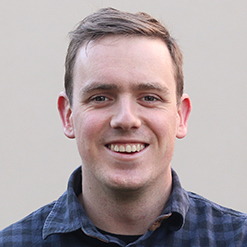 Hugh Collins was a staff writer at the Salvation Army. Originally from Auckland, he was convinced to move to Wellington after watching Taika Waititi’s What We Do In The Shadows. He likes to think his music taste is pretty diverse and enjoys everything from Enya to Swedish death metal.

All articles by Hugh Collins