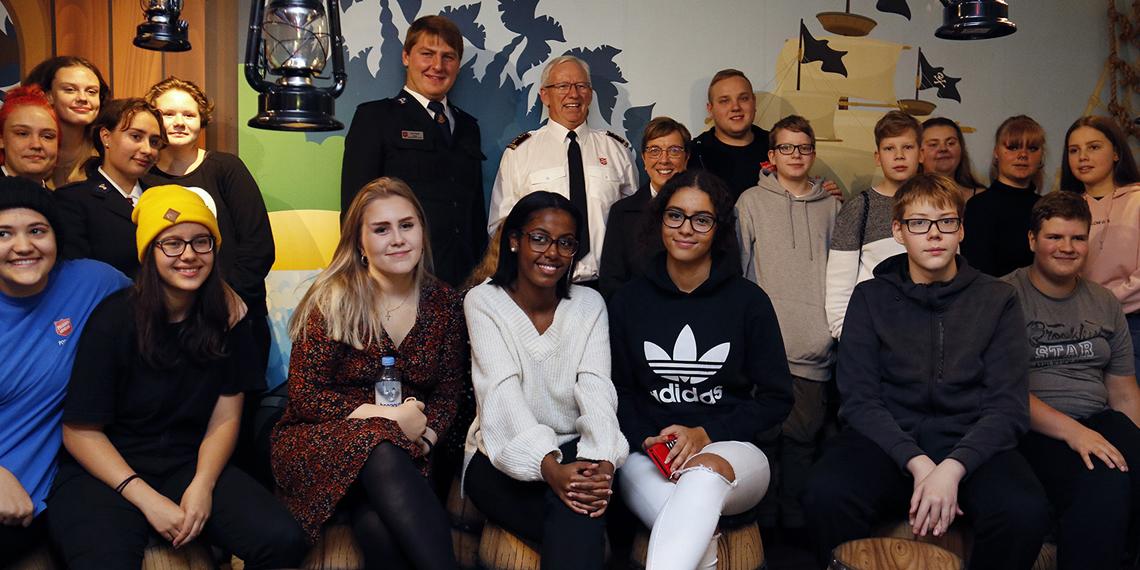 The main celebration party and musical festival took place in the Rock Church in Helsinki – a world-renowned place of worship built into the rock – on Friday evening with a united band and other Salvation Army musicians. Special guest Finnish actress Seela Sella performed dramatic readings of some psalms. As a child, Mrs Sella had attended The Salvation Army in Tampere.

Among the packed congregation was the Canadian Ambassador and many guests from other churches and organisations.

The General presented Hedvig von Haartman Awards to the advertising agency and production companies which have helped to create fundraising campaigns in recent years. The awards – named after a pioneer of The Salvation Army in Finland – are given to people or groups which have shown long-time support and a pioneering spirit in their activities for The Salvation Army.

The next day, around 450 children and their parents gathered in HopLop Adventure Park to celebrate 130 years of Salvation Army mission and ministry. Connected to this ‘Family Fun Day Birthday Party’, the General and Commissioner Rosalie Peddle attended a youth forum where they met young people from Finland and Estonia, discussing topics such as the gap between generations, international relationships between young people and the status of girls around the world. The General highlighted the importance of The Salvation Army being for all generations.

In the afternoon, a women’s rally led by Commissioner Peddle and Colonel Anne-Dore Naud (Territorial President of Women’s Ministries, Finland and Estonia Territory) took the theme ‘On the Way – Valuable and Brave Women Needed’. The commissioner’s message encouraged women to find their value as God’s beautiful creation and to be visible in their lives at home and in the community.

While the women’s rally was taking place, the General and Territorial Commander Colonel Patrick Naud visited Central House in Helsinki, where The Salvation Army runs social service activities including housing units and a goodwill centre.

The day ended with the commissioning and ordination of Lieutenant Jessica Bryant-Rönnqvist by the General. Canadian-born Jessica is unique in being commissioned in Finland by a Canadian General in the presence of a Canadian training principal! The territorial commander officially appointed the new lieutenant to Oulu Corps (church), where she has already served for a couple of months with her husband.

The anniversary weekend concluded with the Sunday morning holiness meeting. In his Spirit-filled Bible message the General told the congregation: ‘We have been called to be holy. It is not an option but a command and necessity. We bring God to the world wherever we go and the world needs us.’ Many Salvationists and friends responded to the message and to God’s call.

National and local media showed interest in the 130th anniversary weekend, with the visit of the Army’s international leaders being featured on a number of TV channels and in various magazines.