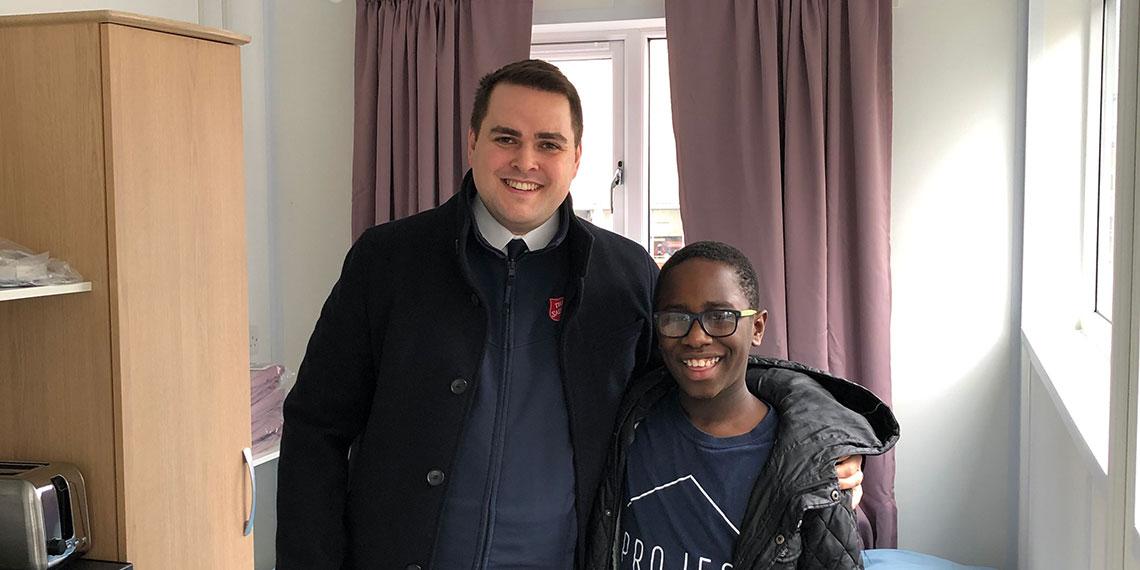 Malachi Place, a brand-new centre to help tackle homelessness in Ilford, East London, has opened its doors this week to support those in need of a roof over their heads. The initiative is a joint £5 million ($6.4 million) venture by The Salvation Army and the London Borough of Redbridge Council. The building is made up of 42 self-contained flats, finished and decorated to provide safe and comfortable homes. It is the first of its kind in the UK to target rough sleepers who have no recourse to public funds.

The accommodation has been named in recognition of Malachi Justin, a 10-year-old boy who became concerned about people sleeping rough in the area. When his first baby tooth fell out at the age of five, Malachi gave his £5 ‘tooth fairy’ money to the local Salvation Army, along with a note asking them to spend it on helping homeless people.

Five years later, this little boy’s dream of a better future for rough sleepers is a reality with the opening of new pioneering homeless complex on Monday 24 February. Malachi was an invited guest as the first residents moved into their new accommodation.

Now 10, he says: ‘I can’t believe it has actually happened and we have built a home for the homeless! I’m really happy that The Salvation Army used my money to do this. No one should have to sleep on the streets. Everyone should have a home. I’m still only 10 but I know that homelessness is getting worse, but this shows there is something we can all do to help.’

Captain John Clifton, The Salvation Army’s leader in Ilford, adds: ‘Malachi’s donation and note really challenged us to do more for the people forced to sleep rough in Ilford. For many years we have offered emergency shelter to Ilford’s street community and, while we could offer food and shelter, we knew it wasn’t enough.

‘People end up sleeping rough for lots of complex reasons and it could be anything from job loss or poor health to addiction. Malachi gave us the focus to think about how we could build homes and provide support to get residents back to independent living.

‘It is our ambition to see it replicated in other parts of the country. If Malachi can start this from just £5, others can follow his path.’

Councillor Jas Athwal, Leader of the London Borough of Redbridge Council which generously paid the construction costs, says: ‘It is fantastic that Malachi Place is now up and running – a ground-breaking joint initiative to help tackle homelessness for those with no recourse to public funds.

‘It is so rewarding to see how an idea that we first put forward … at a council committee has finally reached fruition. I’d like to say a big thank you to everyone who has played a part in helping make this vision become a reality. There is absolutely no reason why people in modern society should be faced with the prospect of sleeping rough. That is why we will continue our efforts to eliminate rough sleeping in the London Borough of Redbridge.’

Among the first residents moving into Malachi Place will be Frank Wrona, aged 40, a recovering addict originally from the north of England who has been sleeping rough on and off for three years. Since taking control of his addictions, Frank has been desperate to find a place to live and get a permanent job. Frank shares: ‘I just want to get settled and move on with my life so getting a room at Malachi Place gets me one step closer to achieving that.’

Malachi Place will provide year-round accommodation and support for people who have been sleeping rough. The Salvation Army will provide specialist 24-hour on-site support for residents to help them deal with the many issues that led them to sleeping rough, like domestic violence, childhood trauma, relationship breakdown, as well as mental ill health.

The flats were fitted out off-site and lifted into position by crane to create the four-storey building. Each unit has a bed/sitting room with its own cooking facilities and private toilet and shower. There is also a bicycle workshop which will open in May where residents can learn skills to help them find a job.

The site is also the first place that The Salvation Army met when it came to Ilford in 1886, using a rented room above Gilderson’s Funeral Directors at 1a Chadwick Road.

As well as the initial £5 from Malachi, The Salvation Army has received support for the project from a number of organisations and charitable trusts including Allchurches Trust. The trust funded the fit-out and furnishings for the new homes, and also prepared personalised welcome hampers for every resident.

From a report by the United Kingdom Territory with the Republic of Ireland. Photo by Nicola Rattray.