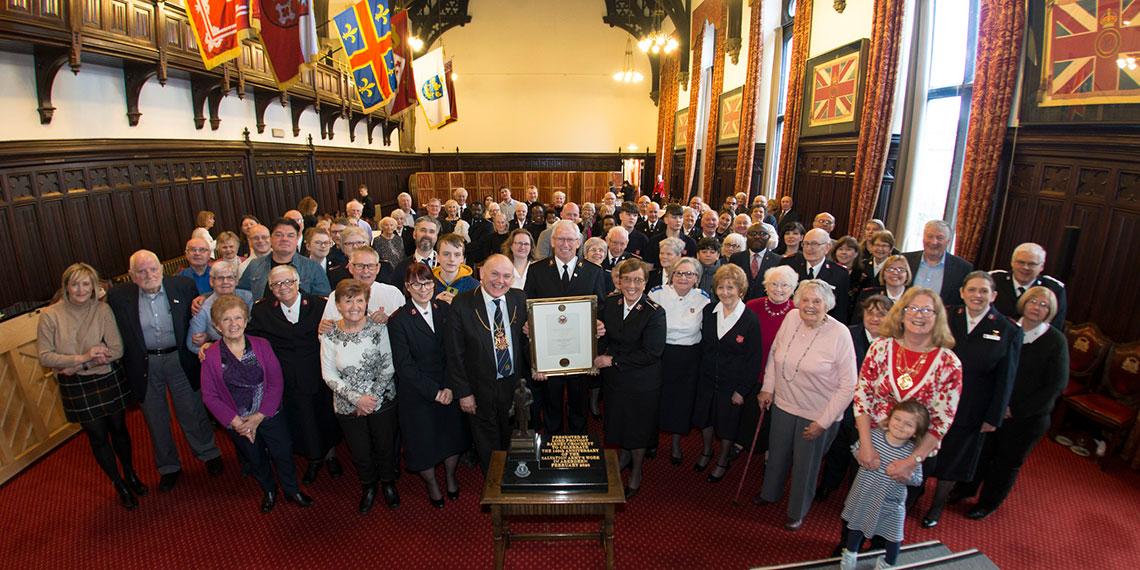 Exactly 140 years since three officers arrived in Aberdeen to start The Salvation Army’s ministry there, anniversary celebrations led by General Brian Peddle and Commissioner Rosalie Peddle (World President of Women’s Ministries) recognised the influence the movement has had and continues to have in the north Scottish city. Because the original ‘opening fire’ – following a request for help sent to Salvation Army Founder William Booth by businessman George Rose – happened on a leap day (29 February 1880), this was the 34th time that the anniversary could be celebrated on the exact date, but only the 10th time it fell on a weekend.

The international leaders and other guests were warmly welcomed to Aberdeen by Lord Provost Barney Crockett at a civic reception. Later, the General had an audience with Hanover Street School pupils, whose chaplain is Lieutenant Helen Froud (corps officer). The General shared later that he was challenged by their questions and heartened by their interest in the fact that he had become a Salvation Army officer because ‘God called me’.

The joyful evening celebration, in a packed Aberdeen Citadel hall – one of the most striking buildings in the city – featured snippets of corps history and made mention of the centuries of Christian worship that had happened on the site.

To the skirl of bagpipes, the General and Commissioner Peddle were greeted by the corps community singers’ rendition of ‘Highland Cathedral’. This was followed by ‘Written in Red’, the words of which were emphasised in the General’s Bible message as being at the centre of the gospel.

Addictions Specialist Ronnie Boyle reported that 400 people have been helped by programmes run through the corps and shared plans to develop a programme for families touched by addictions. Bandswoman Morag Hart explained that the corps charity shop, of which she is manager, is a place where people find a warm welcome, with some coming in just to chat – often up to three times a day!

A massed band and massed songsters added to the evening, which also included contemporary worship.

The General explained that the needs of the past still happen today. ‘We don’t feed people only if they have the right papers!’ he said, urging everyone present to continue to reach out with compassion and show the love of Jesus Christ in every situation.

Commissioner Peddle urged the congregation to ‘keep the fire burning’, with her challenging address resulting in seekers lining the mercy seat and beyond.

In appreciation of The Salvation Army’s work, Aberdeen Council invited the whole congregation for lunch in the Town House, where the Lord Provost spoke, giving thanks for the 140 years of practical and spiritual help the Army has provided. He made particular mention of the early-day ministry with prostitutes and convicts.

The General outlined his vision for the future of The Salvation Army worldwide, giving examples of current developments, and Lieutenant Helen Froud gave the assurance that, even after 140 years, The Salvation Army in Aberdeen continues to reach out to meet new needs in the city, such as its ministry to refugees.

From a report by Divisional Envoy Margaret Ross. Photo by David Gauton