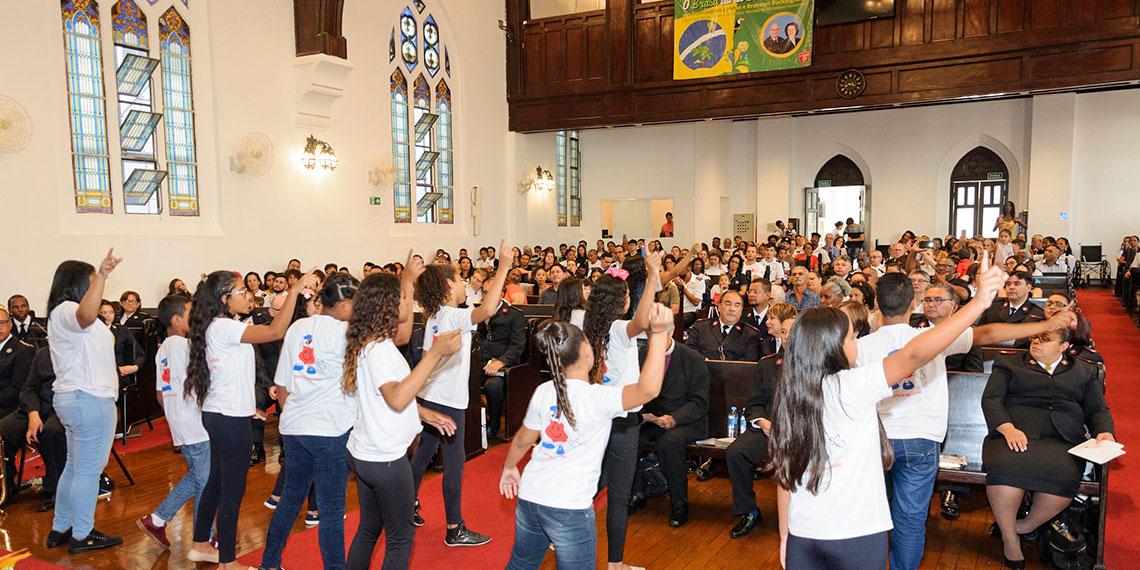 From income-generation to renovation, from an inauguration to the welcome to the Messengers of Reconciliation, the Chief of the Staff (Commissioner Lyndon Buckingham) and Commissioner Bronwyn Buckingham (World Secretary for Women’s Ministries) witnessed and participated in a variety of programmes, initiatives and spiritual celebrations during a visit to Brazil.

The first location on the schedule was the ‘SalvaShopping’ warehouse and distribution centre in São Bernardo do Campo and the SalvaShopping thrift store in Diadema. SalvaShopping is the Brazil Territory’s recycling and income-generation initiative. Accompanied by territorial leadership, the international visitors toured the facility and met the staff.

The next day they travelled to the nearby city of Suzano, where they joined cadets, divisional leaders and officers from headquarters and the São Paulo Division for the dedication to God of a newly renovated lodge in the ‘Vale de Bênçãos’ camp at Lar das Flores, a large piece of property where the Army operates a corps (church), thrift store and camp. The Chief of the Staff and Commissioner Bronwyn shared words of encouragement, reflecting on the history of the site and highlighting the expectation that the camp will be used to lift up the name of Jesus.

Following the dedication, the officers and cadets met for two sessions of officers councils. After dinner, the women officers met to consider the ‘Reimagining’ of Women’s Ministries and the men were challenged by the Chief of the Staff to be used by God.

On Saturday, a welcome tea with divisional leaders and members of the territorial advisory board was followed by the dedication of the newly-renovated territorial headquarters in São Paulo. Commissioner Bronwyn stressed that the purpose of the headquarters is to support those on the frontlines.

In the afternoon, the cadets of the Messengers of Reconciliation Session were officially welcomed as they began their training to become Salvation Army officers. The nine cadets proudly entered the Methodist cathedral to the enthusiastic applause of more than 450 people. The message and testimony of the international visitors were warmly received and appreciated by those in attendance.

The Chief of the Staff and Commissioner Bronwyn, accompanied by territorial leaders Colonels Edward and Deborah Horwood, then flew to Rio de Janeiro, where almost 200 officers and soldiers gathered for a time of celebration and fellowship at the Baptist auditorium on Sunday.

In his Bible message, the Chief encouraged soldiers, officers and friends to ‘come alive’ in order to receive and demonstrate the joy of their salvation. With music provided by the divisional band, timbrel and songster brigades, the meeting inspired the congregation and motivated many to enjoy a time of ‘samba before the Lord’.

On their last day in Brazil, the international visitors marked the inauguration of the renovation of a Salvation Army property in Meiér. The Chief of the Staff reminded all those in attendance that a foundation stone was both a reminder of the past and hope for the future. Included in the renovation will be a new divisional headquarters and a remodelled social centre, dining room and officers’ quarters.

Under the direction of Commissioner Bronwyn, officers from the Rio de Janeiro, Minas Gerais and Federal District Division gathered to pray and seek the Lord’s continued grace on the division’s development and growth.

The Brazil Territory was blessed to host the Chief of the Staff and Commissioner Bronwyn. Their enthusiasm and faithful witness to the grace and love of God in the ministry of The Salvation Army were evident to all.