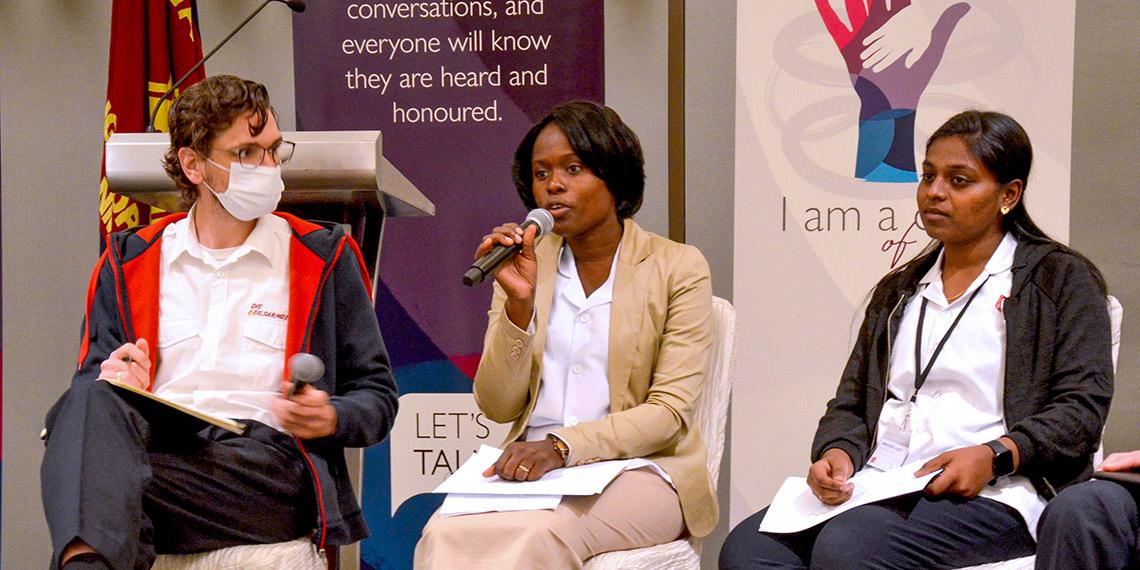 Delegates from a wide range of ages, cultures and backgrounds participated in the first Salvation Army International Symposium on Human Sexuality, which took place in Singapore from 30 July to 6 August 2022. The 99 delegates, representing 49 Salvation Army territories, seven commands and three regions, included soldiers, non-soldiers, cadets and officers of all ranks.

Across the week, delegates explored what it means to be ‘a child of God’, identity in Christ, living with difference, constructing an understanding of faith and sexuality, same-sex attraction/same-sex relationships, pornography, married life, how to live faithfully in all relationships and how to include those who do not feel included.

Colonel Julie Forrest (International Liaison Officer for Dialogue on Human Sexuality) was tasked with organising and hosting this event in response to a recommendation from Salvation Army leaders worldwide. She worked in conjunction with the International Moral and Social Issues Council and the International Theological Council. The desire was to have this as an ‘in person’ event because it was felt that the discussion of topics of such a sensitive nature needed delegates to be physically present. This also allowed relationships to be built between people with widely differing points of view.

The symposium commenced with a keynote address by General Brian Peddle, who appeared on-screen. He said: ‘We must bring our biblically informed faith perspective, sit under its authority and seek the wisdom of God as we engage in the various topics, as well as seeking to better inform our pastoral responses. I do hope that in your deliberations there will be time to explore and create ideas as to how that pastoral response can be meaningful for everyone.’

Each day began with worship. During the week, 13 speakers, from all five of The Salvation Army’s international zones, explored topics of sexuality referring to theological teaching.

Led by trained facilitators, delegates met in small groups to discuss each presentation, learn from each other and listen to what God was saying. Groups consisted of delegates representing at least 10 different territories and there was an emphasis on listening to each other and gaining new perspectives.

Delegates were able to disagree in their groups while maintaining a healthy relationship with one another. It was evident that there was a graciousness and earnestness to disagree without damaging relationships. The intention is that these open, respectful conversations can be replicated in local situations worldwide.

Each group recorded feedback of their discussions and this feedback was reported in a plenary session at the end of each day. The need for greater education and teaching resources was a common request which applied to biblical theology as well as practical applications.

There was also a recognition that it is important to build relationships both in corps (churches) with Salvation Army members and with people who are on the margins of or do not currently belong to corps. Going deeper and understanding others was seen as particularly important.

Throughout the week there was a hunger for the spiritual – the need for spiritual responses to the issues and personal spiritual formation were apparent. Scripture regarding ‘love’ was often applied to topics, underpinned by a searching for and understanding of a need for Salvationists to define and then live by Kingdom values. It was felt that these types of conversations should be made accessible to others.

The discussions and the relationships that were built reflected the call from the General to delegates as they began their time together: ‘There is a need for The Salvation Army today to forge a way forward that is different, safe and God-honouring.’