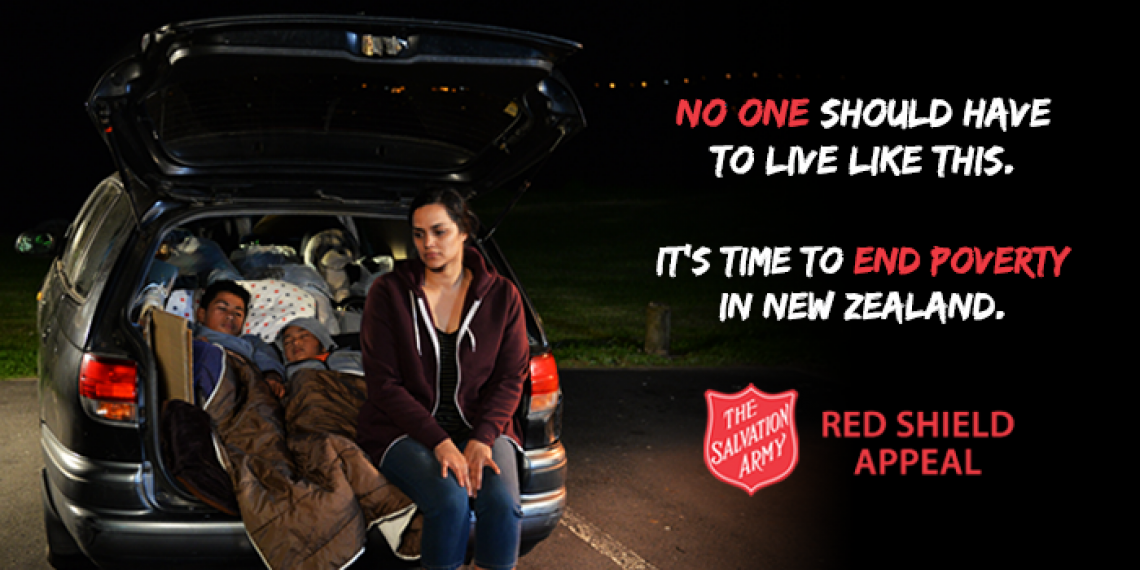 The Salvation Army is calling on Kiwis to end poverty in New Zealand.

New Zealand has a reputation as a beautiful and prosperous country that’s a great place to live and raise children. But for thousands of families living in poverty, the reality is very different, says Salvation Army head of social services Major Pam Waugh.

“I’ve had children tell me they love it when Mum gets paid – that’s the one day they get enough food. That’s not okay for children to have this worry. It’s not good enough in New Zealand.”

It’s a sad fact that 20 per cent of New Zealand children are living in a household that regularly goes without essentials such as adequate food, clothing or heating. That’s one in every five children in New Zealand.

The number of homeless New Zealanders is also growing, with one in every 100 Kiwis classed as homeless according to figures released last year.

No one should have to live like this, and they don’t have to, says Major Waugh. Instead, she is calling for the community to join the fight to end poverty.

The Salvation Army is committed to leading the charge to end poverty in this country, and is asking Kiwis to get behind its annual Red Shield Appeal, which raises funds to support the Army’s frontline work fighting poverty.

Every year an estimated 68,000 New Zealand children and their families rely on The Salvation Army for their basic needs such as food, clothing and household goods, Major Waugh says.

By donating to the appeal, people will be helping these families and supporting Salvation Army services that assist thousands of struggling families each year to escape the cycle of poverty and make plans for a better future.

Last year, The Salvation Army helped more than 120,000 New Zealanders in need, through both short-term emergency support and working with each person on a long-term plan to lift them out of poverty using services such as budgeting, life skills, counselling and accommodation.

Salvation Army statistics show that demand for many of its social services is increasing. In the 2015/16 financial year, there was a 27 per cent increase from the previous year of clients who accessed counselling services, and an 18 per cent increase in people accessing budgeting support.

“The Red Shield Appeal is a chance for every New Zealander to contribute in a meaningful way, to make a real and positive difference in their community. When people are facing crisis and are in their greatest time of need, The Salvation Army is there to help, but we can only do this with the public’s support,” Major Waugh says.

“The Army is challenging all New Zealanders to see the need around us, to talk about it and take action.

“It’s going to take the whole community working together to make this change. We need people to challenge each other and think about what they want their community to look like and how we can make it happen.”

Visit salvationarmy.org.nz/redshieldappeal
Call 0800 53 00 00
Give to a Salvation Army street collector between 1-7 May