More than able | The Salvation Army
Skip to main content 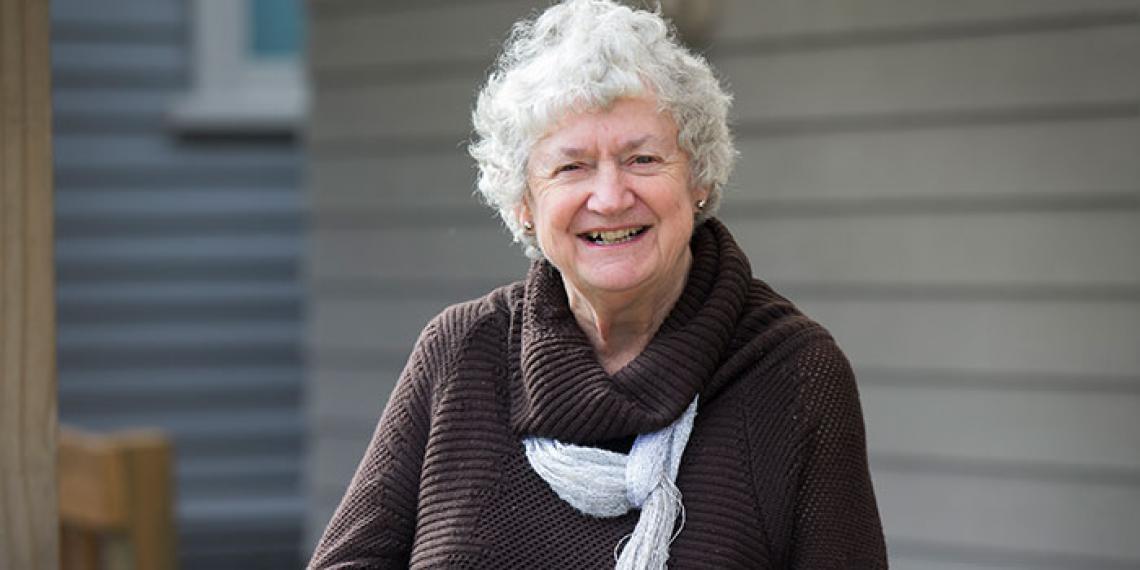 ‘A church that doesn’t have disabled people in it, is a disabled church,’ says Di Willis, director of Elevate Disability Trust. Di describes herself as ‘very ordinary’, but it’s been an extraordinary life—among extraordinary people.

Clive was a young man with severe cerebral palsy. One day he announced that he wanted to preach. Di Willis is honest that she thought, ‘My goodness, no one will be able to understand him.’ However, Elevate advocated for him to be given an opportunity to preach, with an interpreter translating for the congregation. ‘You could hear a pin drop, it was so powerful,’ recalls Di. From that day, an unlikely but gifted preacher was born.

This is a lesson for the church, points out Di. When we assume that people with disabilities cannot have the same spiritual giftings we do, we not only short-change them, but we debilitate the body of Christ.

Plus, they can get away with things we would never get away with, laughs Di. She points to a church in Taupo that is proactive in including disabled people in its ministries. ‘A group of intellectually disabled people have the task of taking the offering. They will come and stand beside you until you put something in the bag or tell them to go away. We could never get away with that!’ It’s a light-hearted perspective on a profound issue: that God uses the weak things of the world to confound the wise.

When I ask Di where she got her passion for people with disabilities, she simply answers, ‘God.’ Yet, as so often happens, God was planting the seeds from the very beginning.

‘I was tested when I was about nine because I was failing school,’ explains Di. ‘They found I was slightly slow in my learning. So I was sent to a special school as a boarder. I had a year of crying the whole time, I was so homesick.’ Yet, looking back, Di realises the school gave her a love of people with disabilities.

It’s not surprising, then, that when Di left school she became an occupational therapist. But it wasn’t until she came to New Zealand from the United Kingdom ‘on an adventure’ that her life changed forever.

‘I was very social and got drunk a lot, and it was a turbulent time,’ remembers Di. ‘I had a real void within, and deep down, I really wanted to know God. A friend invited me to go to the Billy Graham crusade. Well, my friend didn’t end up coming, but I went along and I had an amazing conversion. I was completely changed.’

At the time, she was working at Middlemore Hospital where she was inspired by Bev, a tetraplegic woman who was a Christian. ‘God showed me there should be a ministry for people with disabilities, both Christian and non-Christian,’ says Di.

The idea kept playing in the back of her mind as she got married and began a family. One day, Di decided to pick up the phone and call Bev, who had recently left hospital after two years and was struggling to adjust, as well as look after her three children. Di said, ‘I want to bring people with disabilities to your place.’

Her friend replied that just that morning, she had prayed to God, ‘Lord, only bring the people to my place that you want to be there.’ And so, a ministry was born.

Another friend, Margie, who has cerebral palsy, also helped begin the ministry. Margie went to America to be healed by a famous healing evangelist, but came back devastated that she had not been healed. ‘We were there helping her pick up the pieces,’ says Di.

But out of that experience, Margie went to Bible College where God appeared to her in an awe-inspiring vision: ‘She saw Jesus on a white horse, just like in Revelation, and he gave her an enormous vision of the work he wanted to do with disabled people.

‘We were overawed and didn’t have a clue what to do. We had to really trust God—and whenever the Lord showed us things, we did it. We got criticised to the nth degree for not having this or that, but we just did it. The Lord was so faithful to us, and it just grew and grew and loads of people became Christians. It was a revival really.’

One of their dreams was to hold a Christian camp for people with disabilities, and they nervously booked a venue for 26 people. Forty years later, Elevate’s national camps attract between 300-400 people, with branches throughout the country.

Part of the body

‘I sometimes say that if the Church was really doing its job, we wouldn’t need this ministry at all,’ says Di—although she has also seen first-hand that Elevate allows people to be completely accepted, without having to explain themselves or fight to fit in.

Although many churches have good intentions, there are subtle barriers: ‘I have a bee in my bonnet about churches where there is a stage and no ramp up to it. It’s assuming that people who use a wheelchair, crutches or a walker don't have anything to offer up the front,’ says Di. ‘It’s great if you have a back entrance for the disabled; it’s even better if they can come in the front like everyone else.’

Di shocked the vicar of a traditional church when she suggested they cut a pew in half, so that a person in a wheelchair could sit in the middle of the church, next to friends and family—instead of right down the back or right up the front. Yet, there are also many churches that have showed enormous imagination. ‘There was a boy in a wheelchair who wanted to go to youth group, but their youth room was upstairs. So they changed the location, and started meeting downstairs, and he knew he belonged,’ remembers Di.

Part of her job is to advocate for people so they can go to the church they choose, and be full participants in its ministries. Intellectually-disabled people are great door greeters. Other people with physical disabilities may be prayers, encouragers, preachers and teachers.

Churches have to do some work to include people with disabilities—such as a roster for those needing transport or getting some advice around setting boundaries for people with intellectual disabilities. ‘I love it when a minister rings me and says, “I have someone in my church with a disability and I need some help.” I think, ‘Good on you!’

Elevate can help with practical tips for encouraging and involving people with disabilities. Ultimately, though, ‘it’s your attitude and heart that’s really important,’ says Di.

Last year, Di was given an Unsung Hero ‘Missional Living’ Award by the New Zealand Christian Network, for her tireless work over 40 years. ‘It was such a great thing for the ministry. I’m just a very ordinary person, so God gets the glory,’ she says.

I can’t help but argue that Di is not entirely ordinary. If Elevate shows us anything, it’s that in God’s Kingdom, everyone is extraordinary. And God, who is able, can do immeasurably more than we ask or imagine (Ephesians 3:20).

Need help? | Elevate can help you find practical ways to include people with disabilities in your church
Get involved | You can volunteer with Elevate through prayer support, lending a hand at one of their camps, being a friend, donating and more. Go to elevatecdt.org.nz