The General is #UpForSchool | The Salvation Army
Skip to main content

The General is #UpForSchool 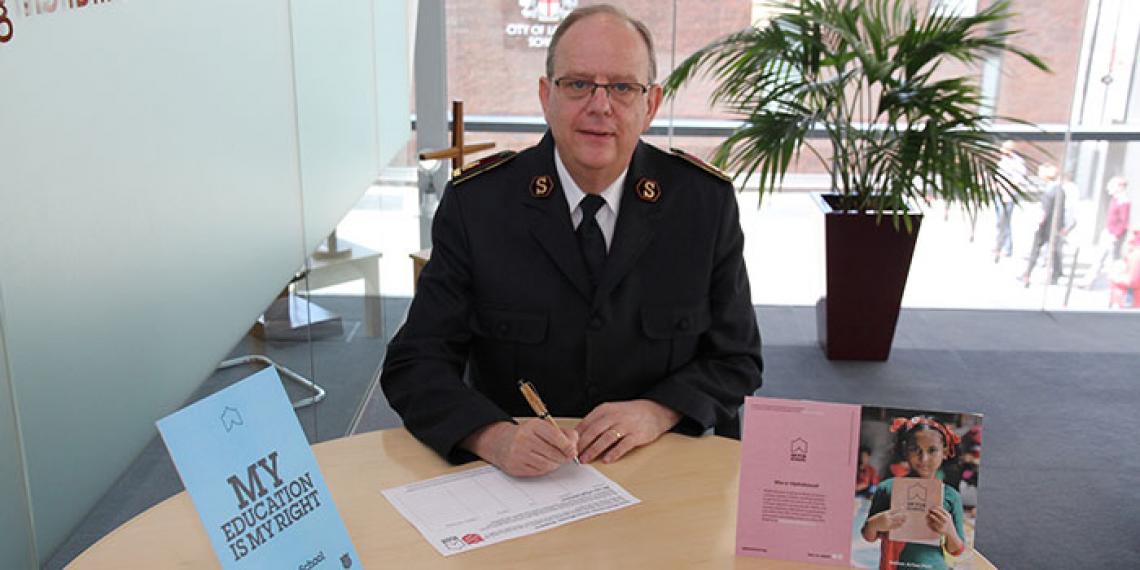 General André Cox has added his signature to the #UpForSchool petition demanding that world leaders take immediate action to get every girl and boy into school.

He hopes that The Salvation Army's million-plus members will follow his example and add their names to what is predicted to become the biggest petition in history.

The petition will be used to challenge world leaders that there is a movement of people standing up for the 58 million children around the world currently excluded from school because they are child labourers, married too young, discriminated against, exploited or living in war-torn regions where their schools, school children and teachers are under attack.

Each Salvation Army territory, region and command is asked to encourage its members, officers, employees, staff and others - including children over the age of seven - to sign the petition, showing that they care deeply about the transformative power of education for every child.

In September 2015 the #UpForSchool petition, including all the signatures collected by The Salvation Army, will be presented to world leaders at the United Nations by United Nations Special Envoy for Global Education – and former UK Prime Minister – the Rt Hon Gordon Brown.

Dr Brown says: 'The Salvation Army is working around the world to support the Up For School campaign to get every child into school and offer them a better future. The role of the faith communities in the Up For School campaign is crucial as together we can create a powerful message that no world leader can ignore. Every child has the right to an education, no matter who they are or where they live. I want to thank The Salvation Army for being a key partner in this historic movement.'

There are two ways people can sign the petition:
1. A paper petition can be printed from one of the many different language files available at www.salvationarmy.org/upforschool. Petitions should be sent to the relevant territorial/command/regional headquarters, from where the A World At School organisation will arrange for them to be collected and taken to London (headquarters contact details can be found via www.salvationarmy.org). The cut-off date for signed paper petitions to be at headquarters is 30 June 2015.

2. An electronic petition is online at www.salvationarmy.org/upforschool, and can be signed electronically until 8am (UK time) on Friday 3 July.

Information to help promote the petition, produced by A World At School, can be downloaded from http://bit.ly/1CT1vAW.