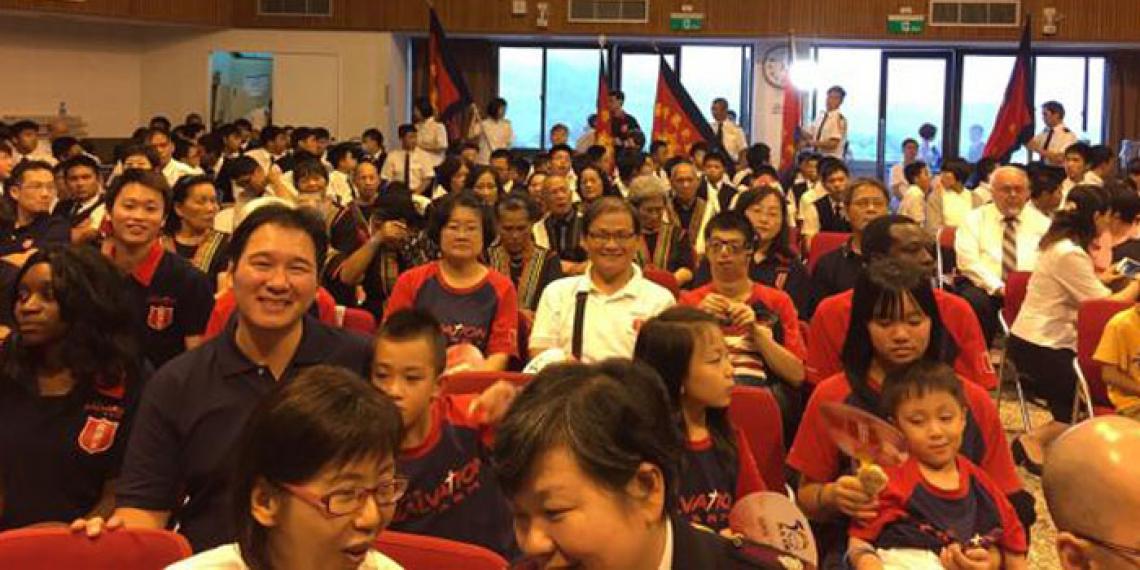 Even a typhoon could not stop Salvationists and friends celebrating the 50th anniversary of the recommencement of The Salvation Army in Taiwan, under the leadership of General André Cox and Commissioner Silvia Cox (World President of Women's Ministries). Saturday events had to be cancelled because of Typhoon Soudelor but the weather cleared for Sunday meetings at Sun Moon Lake, in the centre of the island nation.

Among those present was Leslie Lovestead, who – while serving with the USA forces after the Second World War - had been responsible for the recommencement of Salvation Army ministry in Taiwan.

In the holiness meeting, five senior soldiers were enrolled by the General.

In his Bible message, focusing on 'One Army serving in self-denial', the General said that believers should live their lives as exampled by Christ. While the world emphasises people insisting on claiming personal 'rights', he said, 'we need to be countercultural. We should not admit to the tendency that is within ourselves to be self-centred.'

The General brought his message to a conclusion by referring to John the Baptist, who said of himself concerning Jesus: 'I must decrease, he must increase!'

A number of people responded to the challenge given by the General to lead Christlike lives.

In the second meeting of the celebration, Commissioner Cox challenged the congregation: 'We have a future by doing something now - faith without action is useless.' Referring to the step of faith the Israelites had taken by crossing the River Jordan, she encouraged everyone present to 'step into the future', adding: 'We need to be personally ready by the power of God to go into the future.'