General in Tonga to Celebrate 30 Years 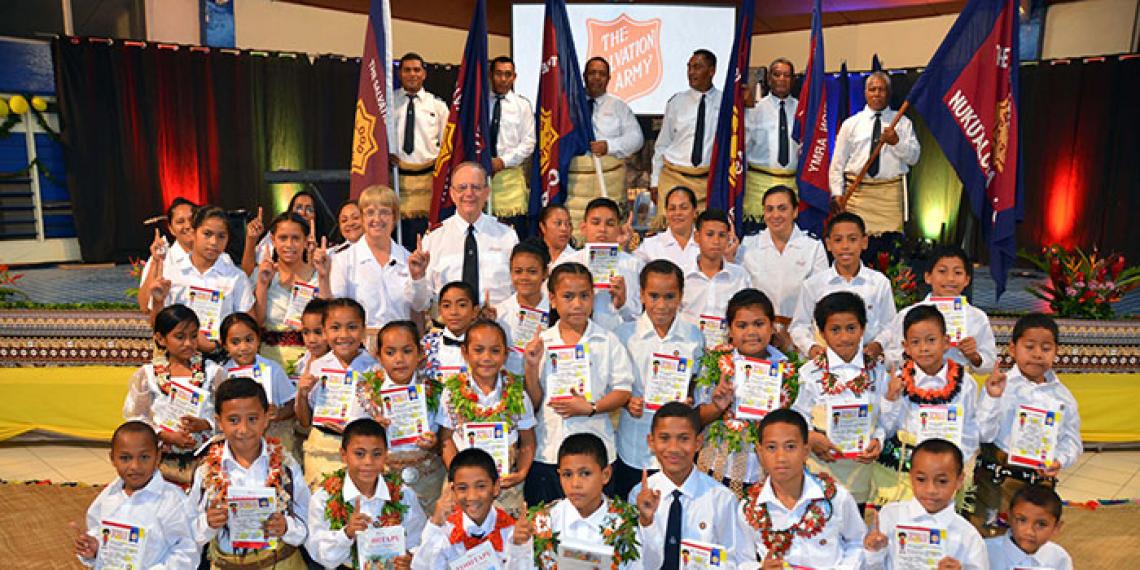 Excited Tongan Salvationists welcomed the first visit of a Salvation Army General to their country, for the Tonga Region’s 30th anniversary celebrations.

Tongan officers and soldiers gathered at Fuaʻamotu International Airport, enjoying music from New Zealand’s Hamilton City Corps Band as they waited for General André Cox and Commissioner Silvia Cox. The Army’s international leaders were accompanied by Commissioners Robert and Janine Donaldson, leaders of the New Zealand, Fiji and Tonga Territory. While at the airport, the General was introduced to Tonga’s Prime Minister, the Hon. Samuela ‘Akilisi Pohiva.

He added, ‘Even though Christianity has been in the Kingdom of Tonga for a century, it still needs to be lived out in people’s lives. It’s not just about dressing up for Sunday—it’s about God living in us, and us helping to bring the full life of Jesus to others.’

Celebrations got off to a great start with a Saturday morning march through the streets of the capital city of Nuku‘alofa.

In the meeting that followed, the General urged people not to become complacent, compromise their faith or rely on past experiences. ‘This isn’t a time to sit down—this is a time to rise up, because God has a work to be done in this Kingdom of Tonga!’ he said. Well over 50 people moved to the mercy seat to pray after the General finished preaching.

Saturday evening was a spectacular celebration of Tongan culture. Commissioner Silvia Cox reminded people that the message of The Salvation Army was one of freedom and hope. ‘It is a message worth proclaiming—and it is our duty to do so. Let us arise and shine for Jesus!’

On Founders’ Day Sunday, the General enrolled 30 junior soldiers and 30 senior soldiers—an increase of 20 per cent in the region’s soldier ranks. A large number also indicated their willingness to serve as officers.

Tonga has just tightened its law prohibiting most commercial business on the Sabbath. The General asked if Sunday worship was so respected and routine that Salvationists took it for granted. ‘If we neglect the Word of God then slowly we will become dry in our soul, and we will die,’ he cautioned.

In the afternoon, the international leaders met with local officers over lunch, and then enjoyed a pizza dinner with some of the region’s young adults. The General also presented certificates of appreciation to four Salvationists, including the territory’s longest serving soldier, Siua Palu.

In bringing the 30th anniversary celebrations to a close, Territorial Commander Commissioner Robert Donaldson said, ‘In a territory made up of New Zealand, Fiji and Tonga, because you are the youngest part and the smallest nation, maybe sometimes you feel the least important. But if only the rest of the territory could have Tonga's heart and commitment!’

The Army’s international leaders then headed to western Fiji to thank some of those involved in the Army’s relief work after Tropical Cyclone Winston struck in February. The cyclone was the largest recorded cyclone to hit the Southern Hemisphere.

‘When people’s hopes are dashed, we roll up our sleeves and we go out,’ the General said of The Salvation Army’s response to tragedy. ‘Thank you for being a living example of Christ as you reached out to people who were hurting. Our hearts should always be open and tender to meet the needs of those around us.’

A group of young men from Saweni Village received special recognition because of their dedication to the cyclone relief effort.