Salvation Army Marches on to Samoa 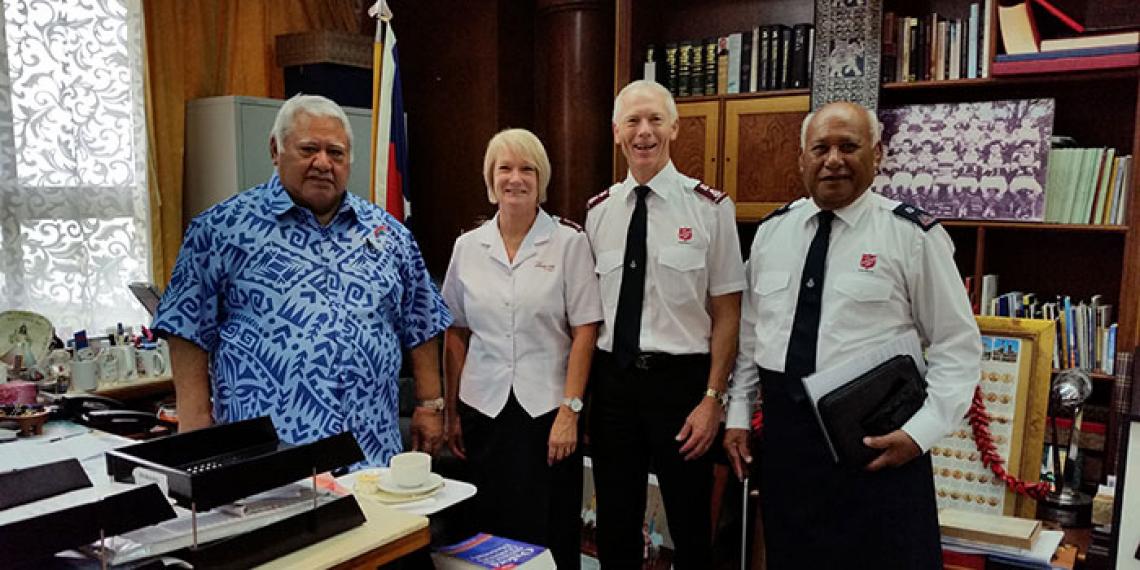 Silila Alao, a faithful Samoan Salvationist from Ōtāhuhu Corps, has persistently asked Lieut-Colonel Rod Carey ‘Why is it there is no Salvation Army in Samoa?’ at every opportunity since their first encounter 27 years ago in South Auckland.

Silila’s question was finally answered with news that The Salvation Army has been welcomed into Samoa and Lieutenant-Colonels Rod and Jenny Carey will pioneer the Army’s work as regional leaders. The move has the approval of The Salvation Army’s International Headquarters in London.

While there, they met with Prime Minister Tuilaepa Sailele Malielegaoi to seek permission for the Army to establish a presence in Samoa. ‘The Prime Minister was warmly supportive of the Army’s desire to serve and gave us his blessing,’ Rod said.

Following this meeting, the Prime Minister wrote on 14 March asking the Army to start work in Samoa as soon as possible, saying, ‘That’s an indication of the importance of your work to our people.’ He was particularly interested in the Army setting up a drug and alcohol treatment programme. ‘I like to think that you were divinely guided to see me to bring the good news of your work for Samoa,’ he said.

While in Apia, The Salvation Army held highly productive discussions with people from the justice and health sectors, where they also received a warm welcome, Rod said. ‘They fully support us in our vision of establishing a church and an addiction treatment service in Samoa. Similarly, the Samoa Umbrella for Non-Governmental Organisations (SUNGO) and the National Council of Churches offered their support and assistance in getting established as an NGO and church in Samoa.’

On Sunday 16 July, the Careys met with Samoan Salvationists from Auckland at Ōtāhuhu Corps to share the exciting news that The Salvation Army was starting work in Samoa. This was received with deep gratitude and joy, said Rod. A week later, Porirua Corps hosted a similar meeting attended by Samoans and other supporters from Porirua Corps, along with Samoan Salvationists from Wellington South Corps and staff from Wellington Community Ministries.

Larissa Toelupe, a soldier of Porirua Corps said, ‘I attended the afternoon meeting with these words singing in my head: ‘The Salvation Army is finally going to Samoa!’ Sam Ioane, also from Porirua Corps, happily declared, ‘Now is the time and our time has come!’

As a nation with a strong Christian heritage, the Careys were asked what would make The Salvation Army’s contribution to Samoa unique. ‘The point of difference is practical caring in the name of Jesus,’ Rod replied. Statistics show a strong correlation between alcohol and other drugs and crime in Samoa, leading to the recent development of a Samoa Drug Court. The Salvation Army believes one important way it can serve in Samoa is by helping people break free from their addictions, supporting the Drug Court’s holistic vision.

Rod and Jenny take up their new roles on 1 November. Between then and early next year, they will establish a base for Salvation Army operations in Apia. They will also establish a constitutional framework for the Army’s work in Samoa—a legal requirement whenever The Salvation Army begins work in a new country.

The Careys plan to take a small planting team of Samoan Salvationists to Samoa to develop a Fa’a Samoa, culturally-appropriate Salvation Army work. They would love to hear from those interested in joining this team, as well as others wanting to support the establishment of this work from New Zealand.

Writing this month to Prime Minister Tuilaepa Sailele Malielegaoi, Territorial Commander Commissioner Andy Westrupp said, ‘Like you, The Salvation Army also senses the divine guidance of God for this exciting step of faith. We look forward to the opportunity to work with the people of Samoa under the Salvation Army flag.’

With reporting from Larissa Toelupe.