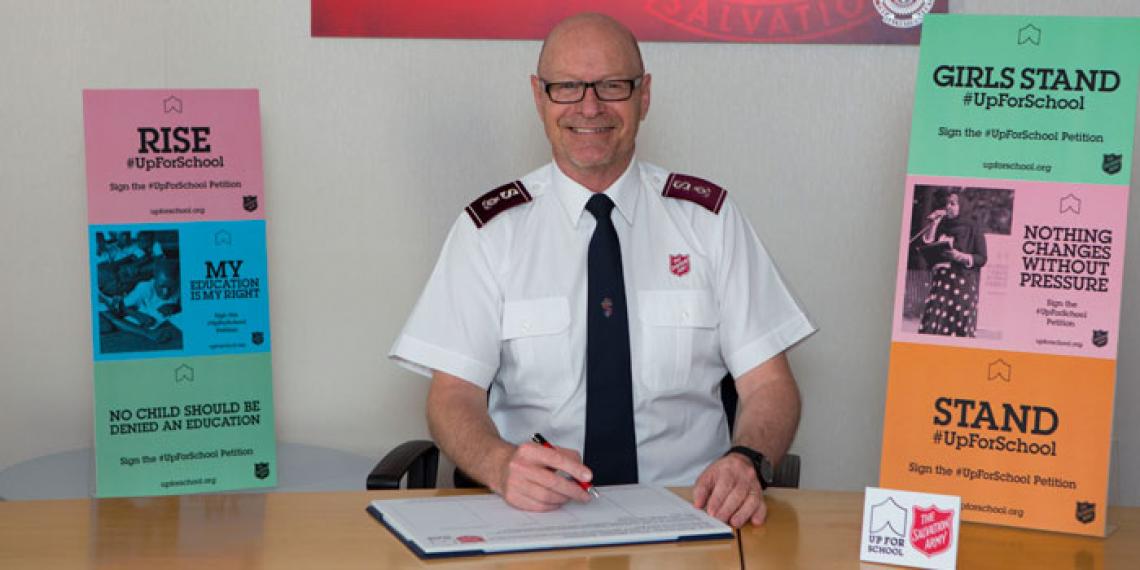 People in New Zealand, Fiji and Tonga are being encouraged to sign on to a worldwide movement supporting education for all children.

During this month, The Salvation Army is joining others around the world in signing the UpForSchool petition organised by the UN Special Envoy for Education, former British Prime Minister Gordon Brown. The petition calls on world leaders to honour their pledge in the 2000 Millennium Development Goals to ensure all out-of-school children gain their right to education before the end of 2015. It also urges them to tackle the problems preventing children attending school. Almost five million people have already signed the petition, which organisers are hoping will be the world’s largest petition.

The petition states: ‘We, the world’s youth, teachers, parents and global citizens appeal to our governments to keep their promise, made at the United Nations in 2000, to ensure all out-of-school children gain their right to education before the end of 2015. We are standing up to bring an end to the barriers preventing girls and boys from going to school, including forced work and early marriage, conflict and attacks on schools, exploitation and discrimination. All children deserve the opportunity to learn and achieve their potential. We are #UpForSchool.’

Salvation Army churches around New Zealand will be collecting signatures in the next few weeks. The collection is part of an international effort by The Salvation Army, aiming to add more than a million names from the 126 countries in which the Army is at work. The signatures will be presented by General André Cox to Mr Brown during The Salvation Army’s International Congress in London in 3 July, during a day focused on social justice issues.

New Zealand Fiji and Tonga Territorial Children’s Secretary Major Bronwyn Malcolm said people in the territory were privileged to have the opportunity to go to school in safety, which others did not always have. ‘We need to do our part for them and every little action we do does make a difference. Even though we don’t always see the significance, every little bit helps.’

Anyone over the age of seven can sign the petition and Territorial Youth Secretary Major Jo Wardle said signing the petition was a simple way for young people to be able to take part in changing the world for people their age. ‘This is a really simple act, you don’t have to donate money or run a marathon—it’s a way for everyone to make a difference, young and old.’

Mr Brown will deliver all the collected signatures to world leaders meeting at the UN in September to agree goals for the next 15 years.