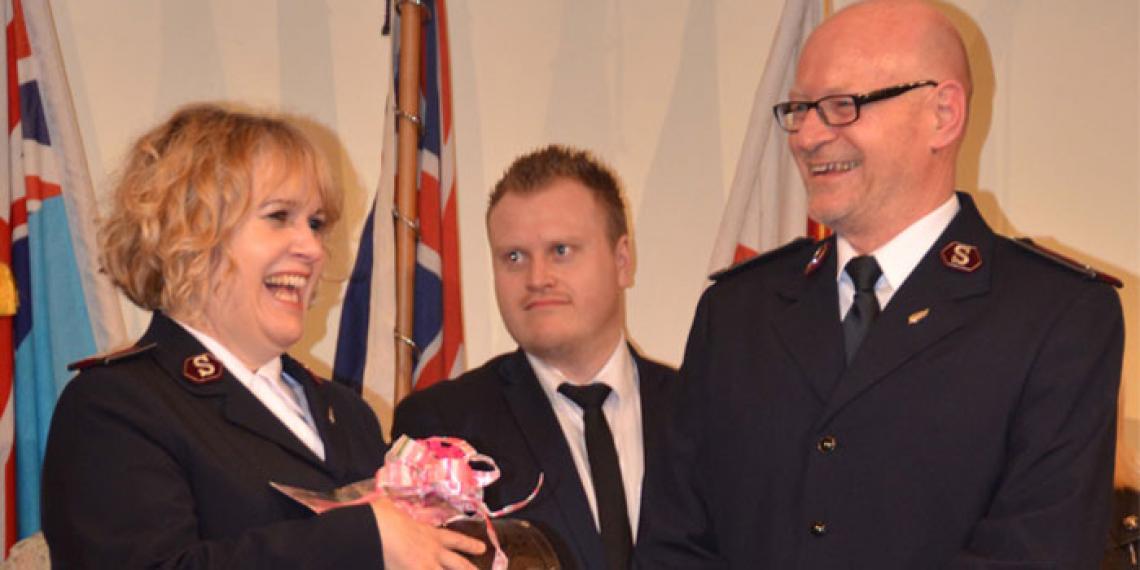 It was a bittersweet occasion—with plenty of laughter and tears—as Commissioners Robert and Janine Donaldson were farewelled for overseas service by family and friends on Saturday evening 10 December. This followed three years as Territorial Commander and Territorial President of Women’s Ministries of the New Zealand, Fiji and Tonga Territory.

In a service led by Chief Secretary Colonel Willis Howell, representative speakers spoke of Robert and Janine’s warmth and Christian integrity. Many recalled Robert’s encouragement to Salvationists to focus on doing ‘the right thing, in the right way, and for the right reason’, while Janine was thanked for championing the role of women. Both were described as ‘true servant leaders’.

Soldiers Aaron and Heather Stone shared some memories, with Aaron thanking the Donaldsons for being prepared to ‘roll up your sleeves and muck in with the rest of us’. Heather expressed confidence that God would continue to guide their steps and equip them for the tasks ahead.

Speaking on behalf of active officers, Captain Gerry Walker praised the Donaldsons for their genuine interest in Salvationists and their commitment to empower people. ‘Your heart for mission permeates [all] your decision making,’ he said. This was evidenced by the territory’s new mission plan with its emphasis on being ‘Te Ope Whakaora, the Army that Brings Life’. Their legacy also included a new governance framework that would bring greater transparency and accountability, more open communication, and more inclusive decision-making.

Māori Ministry leader Lieutenant Trish Mataki thanked the Donaldsons for offering opportunities for cultural learning while leaders at Booth College of Mission. Those seeds continued to grow, she said. ‘Māori culture has been given an opportunity to stand on a firmer foundation in God. You have helped us build a relationship of tikanga that is slowly becoming relaxed and accepted within The Salvation Army.’

Retired officer Lieut-Colonel Lyn Buttar said the Donaldsons had consistently preached, taught and testified that people must progress from second-hand or inherited religion to a first-hand experience of Christ as Saviour and Lord. ‘Their bottom line, as long as I have known them, is: give all your giftedness and your very best energies to the Lord Jesus Christ in his divine service. He captured the thoughts of many by saying, ‘We reluctantly release you to go to London, for what we believe will be for the greater benefit of The Salvation Army.’

More humour came as Colonel Barbara Howell and Kate Geddes shared a conversation on what it had been like for Kate to sit next to Robert in the baritone section of the Wellington Citadel Band, and for Barbara to sit across the corridor from Janine’s office. Kate described Robert as ‘a legend’ who understood what it was like to be in ‘relational community’. Barbara said of Janine, ‘You have been a leader who helps give women a voice—you have encouraged us to dare and to stand firm on the truth. When you walk into a room you brighten it up with much colour. Your inspiration is so contagious, and you have infected other people with your love, your compassion and your grace. And may we never recover from that.’

In response to the many words of farewell, Janine said, ‘We’re totally overwhelmed and incredibly grateful.’ It had been their great privilege to lead the New Zealand, Fiji and Tonga Territory. ‘We are proud Kiwis! We love our land and will do our best to represent you well. As leaders, Robert and I have not got everything right, but we thank you because you have seen past our frailty to something else, and you’ve been patient and kind, loving and understanding. May the Lord bless you.’

In a brief Bible message, Robert spoke of his love at seeing the Army’s mission, ‘to bring life’, worked out in people’s lives, and thanked people for their commitment to ‘change the world’ through The Salvation Army. ‘We have a specific calling to the poor, the marginalised and the dispossessed. And we have an incredible opportunity every day to bring wholeness of life to every person who walks through our door—but we have to live like Jesus!’

Earlier in the meeting, Robert played as part of the Wellington Citadel Band. He made a special point of thanking the band for its significant contribution to his wellbeing. Over the past two years, while under the immense pressure of carrying the responsibility of two additional international appointments, attending band practice had been ‘a little oasis’, he said.

As SpiritSong presented a moving farewell song reflecting on the lasting impact of the Donaldsons’ ministry for God, a number of past and present colleagues, along with family members came to the platform with flowers and embraces for Robert and Janine. While family remained on the platform, long-term friends and supporters Majors Anthony and Gaynor Stone shared final words of appreciation.

Janine’s father, Lieut-Colonel Russell Hamilton gave the benediction before Robert took the opportunity to conduct the band in the piece ‘Victors Acclaimed’.