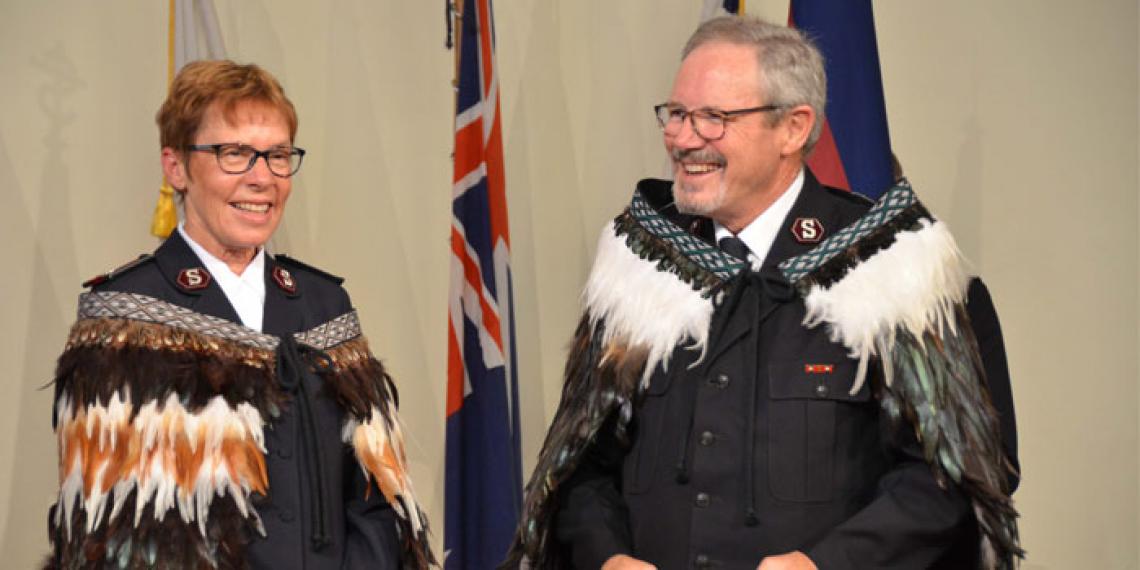 The new leaders of the New Zealand, Fiji and Tonga Territory are calling on Salvationists to adapt their approach so God’s message of salvation makes sense to those ‘who desperately need Jesus Christ’ in their lives.

The Peddles, who served in New Zealand 10 years ago, are close friends of the Westrupps. Commissioner Brian Peddle said it ‘took a territory to grow territorial leaders’ and thanked the New Zealand, Fiji and Tonga Territory for raising the Westrupps up to be their new leaders. He took time to praise the territory’s new mission plan, particularly its focus on The Salvation Army fulfilling its mission to be ‘the Army that brings life’.

A Māori welcome for the Westrupps and their whānau opened the afternoon meeting. Andy and Yvonne were honoured to receive feather korowai (cloaks) from Māori Ministry leaders Lieutenants Trish and Tau Mataki. It was a special weekend for Māori Salvationists, with Trish and Tau heading from the installation to Waitangi to represent The Salvation Army alongside other Māori Salvationists and supporters.

The Westrupps were most recently leaders of The Salvation Army’s work in Papua New Guinea. Majors Kila and Kemo Apa, Territorial Programme Secretaries in the Papua New Guinea Territory, attended the welcome to deliver the Westrupps back to their homeland. Introducing the Apas, Yvonne said, ‘They represent the people of Papua New Guinea, who are very important to us and will always stay in our hearts.’ The Apas thanked the territory for the godly leadership of the Westrupps over the past three years.

Sarah attends Johnsonville Corps in Wellington’s northern suburbs, planted under the leadership of Andy and Yvonne in 1995, and was dedicated to God by Andy when she was a baby. ‘The Spirit of God is evident and will continue to be evident in this couple,’ she said, welcoming them back ‘into the family of the New Zealand, Fiji and Tonga Territory’.

The territory was at a ‘historic juncture’, said Stephen, adding, ‘We are ready to launch off and meet the challenges and opportunities that God is leading us to.’

Sheryl emphasised Yvonne’s positivity and her ability to always see the potential in people and situations, coming from the conviction that people were the Army’s greatest commodity. She thanked the territory’s new Territorial Secretary of Women’s Ministries for releasing women in leadership. ‘Keep doing that!’ she urged.

Shane, whose parents trained as Salvation Army officers alongside Andy and Yvonne, offered two words for the couple to focus on in their leadership of the territory: ‘Be yourselves.’ He noted their energy, creativity, confidence, commitment, humility, approachability and courage. ‘Take what God has given you, continue to seek his direction—and step forward and lead.’

‘We are delighted to be home and to have the privilege of being involved in what the Holy Spirit is doing in this territory,’ said Yvonne in her response. She was confident God was working in The Salvation Army, ‘opening and closing doors’, but said it was important to respond with action.

The new Territorial Commander called for ‘holy boldness’ to go through those open doors. Years earlier, while ministering to Bridge clients who attended Spreydon Corps, Andy realised the way The Salvation Army ‘did church’ often distanced it from those struggling to find God. He and Yvonne put that knowledge into practice when establishing Johnsonville Corps. ‘The key was changing how we [presented the Christian message], so the Christ of the cross could make sense to people,’ he said.

The ‘gulf’ between the churched and unchurched was even more of a challenge in 2017, he said, partly because people had even less biblical understanding. ‘Young people do not have any idea at all about Jesus Christ, and the cynicism of the world we live in has Teflon-coated their hearts.’

The challenge was clear. ‘If we continue to do the things we’re doing, our numbers will continue to drop and we’re going to die. We have to adapt! We’re not going to water down the gospel message, but we need to find ways to make sense to our target audience. We can adapt—if we have the will. Yvonne and I are dedicated to making the gospel relevant. Are you with us?’

The morning meeting at Wellington City Corps had given an opportunity for the Peddles to issue a similar challenge. Commissioner Rosalie Peddle, coordinator of The Salvation Army’s Whole World Mobilising initiative, told the congregation, ‘We have to get back to what God is calling us to as a salvation army—getting out into our neighbourhoods with the message of the love of Jesus, telling people there is hope for a hopeless world!’

Commissioner Brian Peddle said while it was good to see people coming together on Sunday as God’s people, ‘You can’t stay here! You have to come to grips with the benediction—that God sends us out to a broken world. If God’s church is not mobilised into the world today, it is of no use to the world today.’

Introducing thoughts that Andy would develop in the afternoon, the Chief of the Staff said, ‘We do not live in a world where people knock on our doors and say, “Tell me about Jesus.” He reminded people that God’s salvation message was not a message to be kept, but to be shared. ‘God has rescued us; he can rescue others. Mobilise your heart and your convictions—God has given us a voice in the world!’