Standing together | The Salvation Army
Skip to main content 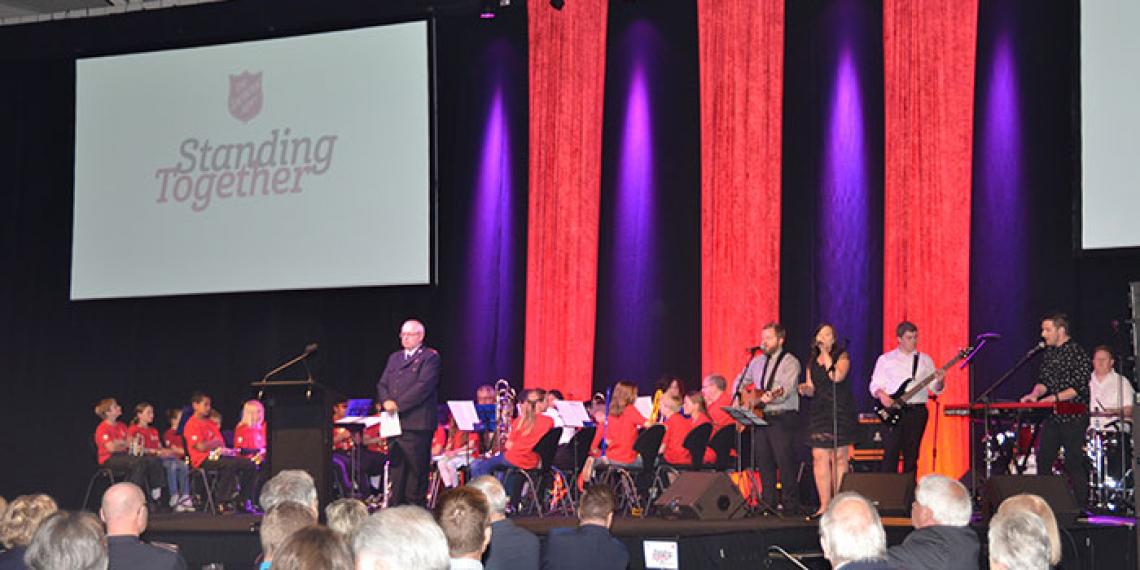 Volunteers who took part in The Salvation Army response to the Canterbury earthquakes were thanked at a special dinner in Christchurch on Friday.

More than 300 people attended the Standing Together dinner at Wigram Air Force Museum recognising and commemorating the work of the responders and celebrating the future.

Commissioner Janine Donaldson, who MC’d the event, told the guests it was a chance for the territory to, ‘express our thanks for your courage, commitment, passion and resilience. It is for us to express our utmost gratitude and appreciation. We honour you.’

Guests were treated to music by the Wellington City Brass Band and the Just Brass band, made up of pupils from two Christchurch primary schools who have received free music tuition through Christchurch City Corps as part of its post-earthquake school support work. They shared memories and watched video accounts from responders about their experiences. Territorial Commander Commissioner Robert Donaldson, Christchurch Mayor Lianne Dalziel and Southern Divisional Commander Major Ivan Bezzant also spoke.

Commissioner Donaldson thanked the responders, along with Salvation Army leaders, NGOs, donors and government partners on behalf of the territory. He gave a special thanks to those from Canterbury who went through ‘unimaginable grief and loss’ and the stress of the quakes, and came back every day to serve others.

He also delivered an emotional apology to those within The Salvation Army who did not receive enough support or thanks during or after the response. ‘On behalf of the territory and myself, please receive from me a very humble and heartfelt apology for our shortcomings in terms of your care. We are sorry. Please forgive us. We have learnt. And, if there is a next time, we will do better.’

He then officially launched a new Salvation Army book about the response. Copies were given to each guest and he said the book was ‘a small tribute to the responders’ commitment and service’. The 70-page book titled Standing Together tells the story of the response through the eyes of more than 40 people involved, who share their first-hand experiences of the quakes and the aftermath.

Christchurch Mayor Lianne Dalziel spoke of the privilege of serving and of the dedication of the responders. ‘Caring for people, transforming lives and reforming society, that’s what you stand for. Each one of you can be proud that when the time came you walked the talk. And a grateful city, through their mayor, says thank you.’

Southern Division Divisional Commander Major Ivan Bezzant said each responder, and the Army as a whole had given its best at the time when it was needed. He said the hope of the people of Canterbury and their resolve to make the region a better place was inspiring and The Salvation Army would continue to be a part of that.

‘I’m excited about what will emerge and what is happening as this region rebuilds. This Salvation Army is not going anywhere, but we are committed to being a part of this city, committed to working alongside people with a heart of love and to serve all of humanity in this place.’