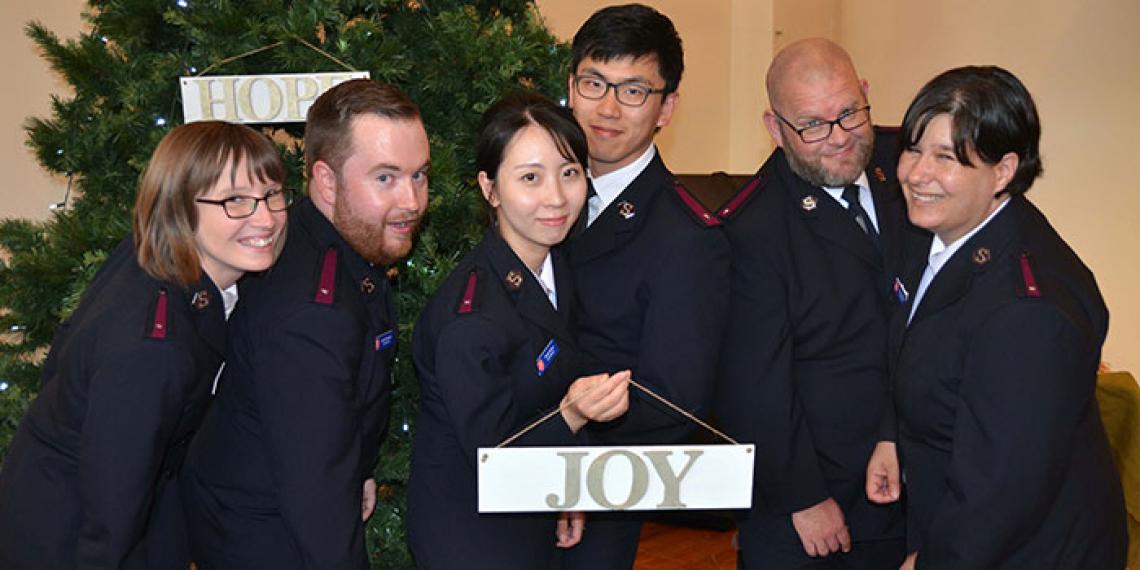 What better time to commission Salvation Army officers with the sessional name of ‘Joyful Intercessors—He Kaiwhakawhiti o Te Hari’ than the season of Advent!

The 2016 commissioning weekend from 9–11 December was a time of joyful worship and celebration of God’s faithfulness. Six cadets became lieutenants and the seven cadets of the ‘Messengers of the Gospel—Nga Karere o Te Rongopai’ session looked ahead to their second year of training.

Friday evening’s graduation at Hutt City Corps honoured the academic accomplishments of those training at Booth College of Mission. Training Principal Captain Ian Gainsford welcomed people, saying, ‘I’m a believer in education—I believe it equips us to carry out the mission to which God calls us. But we need to ground ourselves not just in theology but in faith.’

Graduates included Cadets Emma and Jacob Howan, Erica and Fraser Kearse, TaeHwan (Ted) Kim and Aram Kwon. As well as receiving Diplomas in Salvation Army Mission and Ministry and Certificates of Salvation Army Officer Training, the cadets received Diplomas in Christian Studies, in conjunction with Laidlaw College. Also awarded this qualification was Barry Kirby, who studied at the college’s School of Bible and Mission.

It was also a proud moment for Major Helen Knowles who received a Graduate Diploma in Theology from Laidlaw College.

As chair of the BCM Governance Board, Commissioner Robert Donaldson noted that the 2016 New Zealand Qualifications Authority (NZQA) evaluation and review saw the college assessed as a Category One tertiary provider for the first time.

Graduate speaker Cadet Aram Kwon described BCM as ‘a safe place to be challenged and grow and to be heard’ and prayed the college would continue to be part of God’s story.

Lieut-Colonel Jennifer Groves presented the keynote address. A New Zealander, Jennifer’s officer service has included Portugal, the United Kingdom, Taiwan and, currently, Canada. She challenged the cadets to be ‘agents of change’ as they began their ministry as Salvation Army officers. ‘Whatever ministry you go to, stay close to God!’ she said. ‘If you want to be a change agent, do not resist the true agent of change—Jesus. Remember his words: remain in me, and I will remain in you.’

Saturday began with an intimate gathering in which parents of those about to be commissioned were thanked for the part they had played in their children’s lives and in their calling to become Salvation Army officers.

In the afternoon, the commissioning, ordination and appointing of the cadets was held at Wellington City Corps.

Lieutenant Emma Howan said her whole life had been one of knowing God as she was raised in a Salvation Army family. ‘I had all of the theory of a young Salvationist and made a commitment to more deeply know God as a teenager.’ However, Emma then took over the ‘career planning’ of her life. Although called to officership, she pushed that aside, pursuing religious and political studies at university. Although she and her husband still intended to become officers, they felt this was still some time off.

The couple had just bought a house, Emma had started a new job, and tickets were booked for an overseas trip, ‘when God gave this GO!’ Initially angry at God for interrupting their plans, Emma says she then heard just two words: ‘Trust me.’ She and Jacob stopped trusting God on their terms, stepping out of their comfort zone to enter officer training in 2015.

On Sunday morning, the now second-year Messengers of the Gospel cadets took to the platform, while the new lieutenants were already blending in amongst other officers with their new red trimmings.

The Messengers of the Gospel were introduced as ‘seasoned campaigners’ who came from a variety of work, ministry experience and cultural backgrounds. Captain Ian Gainsford said, ‘Going back to school is a real challenge, but [their first year of training] has seen them grow—they are seeking something more and becoming something more’.

A tug-of-war game demonstrated the powerful strength of intercession as the new lieutenants and the Territorial Governance Board ‘stepped in the gap’ to help the children win a battle against the Messengers of the Gospel.

Lieutenant Erica Kearse recalled coming through the Army’s doors at Waitakere Central Corps to discover people who were warm and friendly and where she was quickly welcomed into the whānau. She challenged the congregation to be mindful of the 120,000 people who come through the Army’s doors each year, asking, ‘What about the other Ericas? Are they feeling our love and compassion?’

In his testimony, Cadet Mike Bryan spoke of the ‘baggage’ of his life. As a young man, Mike adopted a scientific approach, but soon realised this way of looking at life didn’t have any soul. He rejected the Bible but explored other religions, eventually becoming an atheist. ‘I spent years wandering around in my own wilderness, but then I came back to the Bible. The good news is, I’m a beloved son of God—in my brokenness God accepts me. Let’s not make any apologies for our God, let’s not limit God, and let’s not hide the power of our God!’

Long-serving officers were recognised for 25, 30, 35 and 40 years of Salvation Army officership—among them Commissioners Robert and Janine Donaldson, with 30 years’ service to their names.

In his final Bible message as Territorial Commander of the New Zealand, Fiji and Tonga Territory, Commissioner Robert Donaldson taught on Jesus’ invitation for the weary and burdened to find rest for their souls by taking on Jesus’ yoke. He called on three helpers to demonstrate what it was like for a ‘wise older oxen’ to train a younger one. In spiritual terms, this meant becoming ‘humble and obedient, with our Lord Jesus Christ beside us,’ he said.