We Won’t Forget You 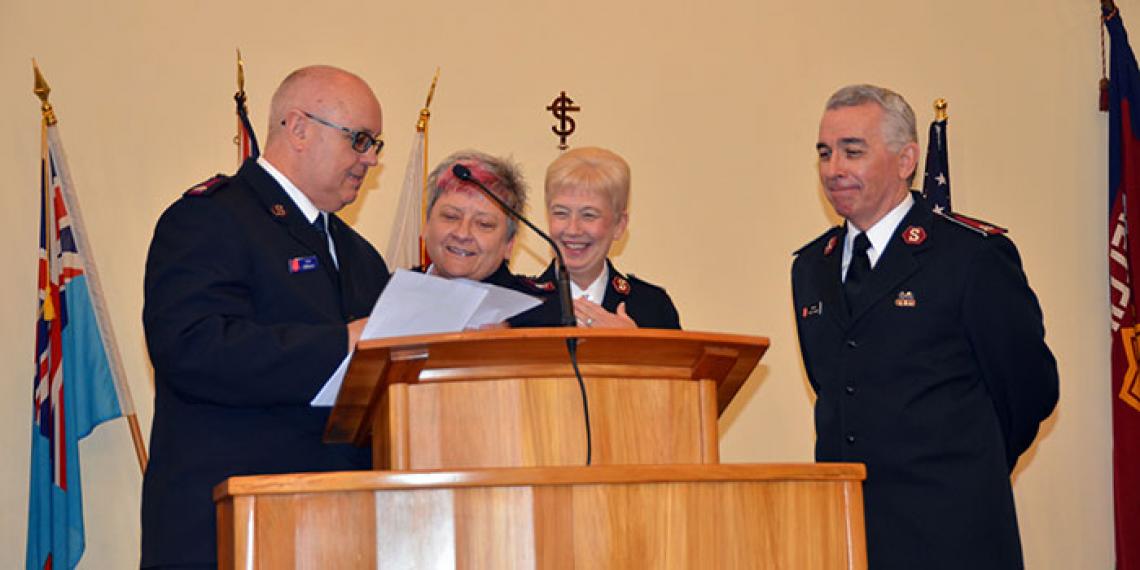 (Pictured: Majors Ivan and Glenda Bezzant (at left) list some of Colonels Barbara and Willis Howells' many admirable qualities, including their sense of fun)

Colonels Barbara and Willis Howell were farewelled for new appointments as territorial leaders in their home territory of USA Southern in a meeting at Wellington City Corps on 1 October. The couple had served as Chief Secretary and Territorial Secretary for Women’s Ministries in the New Zealand, Fiji and Tonga Territory since September 2014.

Both paid tribute to the blessings they had experienced over the past three years. Willis said, ‘We are infinitely richer in the things that matter – the things that last – for having been accepted into the whānau of New Zealand, Fiji and Tonga. Thank you for taking in a couple of strays!’

‘We came to a new family,’ said Barbara. ‘When we look at each of you, we see people of God who love each other and want to make a difference in people’s lives. You have poured that love out to us.’

Commissioner Yvonne Westrupp, Territorial President of Women’s Ministries, thanked God for his call on the Howells’s lives. She introduced Rosy Keane, who had worked alongside Barbara to reinvigorate women’s ministries across the territory. Rosy presented a spoken word piece ‘An Ending, A Beginning, A Farewell,’ with the lines: ‘We know Jesus draws you right by his side … we send you off knowing God’s got you in tow.’

Many of the afternoon’s representative speakers noted the Howells’ sense of fun, their encouragement and mentoring of others, their skills in communication and organisation, along with their integrity and passion for mission.

Selena Thomson, executive assistant to the Howells, spoke on behalf of Salvationists and staff. ‘You have impacted people in a profound way, embracing the cultures that are a big part of who we are. You are appreciated for your ministry and the godly example you have set.’ Selena presented the gift of a carved kauri waka (canoe) on behalf of the territory.

Southern Division leaders Majors Glenda and Ivan Bezzant said the Howells’ leadership had been inspiring and left a legacy of momentum sure to further grow the Kingdom of God.

After others had shared their farewells, Territorial Commander Commissioner Andy Westrupp added his own. ‘What you see—which is good!—is what you get [with the Howells]. They have consistent hearts for people and mission. We will miss Willis’s preaching, his sayings and one-liners. Barbara, we will miss your legendary organising skills. We honour you for your kind spirits. It is with gratitude to God and a tinge of sorrow that we say goodbye and God bless you for your leadership and your ministry.’

Many around the territory had appreciated Willis’s musical skills, so his duet of ‘I’ll Fly Away’—playing banjo alongside Andy on guitar—was enthusiastically received. Willis thanked the Soul Praise choir from Tawa, the couple's New Zealand ‘home corps’, for taking part in their farewell.

The meeting also provided an opportunity for the Territorial Commander to ask for God’s blessing and strength on the future ministry of Lieut-Colonels Jenny and Rod Carey and Captain Miriama Simanu, who will provide leadership for expanding The Salvation Army’s ministry into Samoa in the new year.